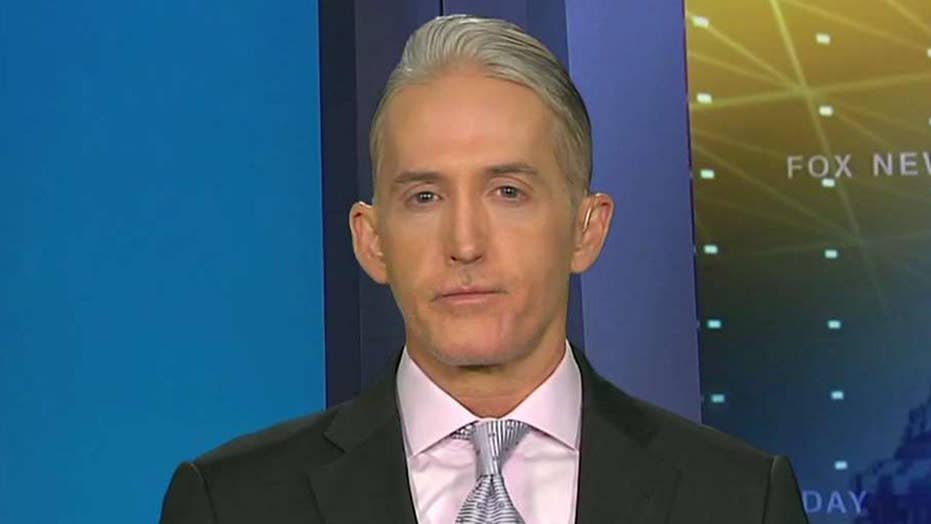 The House Republicans’ top investigator, Rep. Trey Gowdy, said Sunday that text messages between FBI officials Peter Strzok and Lisa Page show they “hated” then-presidential candidate Donald Trump, but the South Carolina lawmaker suggested the two testify to settle concerns on whether they were powerful enough to take down Trump or protect Democratic rival Hillary Clinton from criminal charges over her emails.

“I can’t prove that they were the final decision makers,” Gowdy, chairman of the House Committee on Oversight and Government Affairs, told “Fox News Sunday.” “But I don’t have to. Two really important people hated (Trump); would have done anything to protect” Clinton.

Gowdy pointed out that Strzok interviewed Clinton about her use, as secretary of state, of private servers on which emails with classified information were discovered. And Strzok scrubbed language about Clinton’s “grossly negligent” behavior from the final FBI report on the server-email investigation, he said.

“Did they have the power to protect her?” Gowdy asked. “The decision not to charge (Clinton) was made even before they interviewed her. How would you like that deal?”

Gowdy also pointed out that Strzok and Page, who were allegedly having an affair at the time, were removed from the Justice Department’s Russia-collusion investigation when special counsel Robert Mueller, he said, learned of their “insidious” political bias.

However, he declined to make a conclusion about whether a text between them regarding a “secret society” of FBI agents was a joke or real, as Sen. Ron Johnson, R-Wis., has suggested.

“Republicans are better served by letting the texts speak for themselves,” Gowdy said. “These witnesses need to come in and tell us what they meant by it.”

Gowdy also said that he supports the release of a memo drafted by congressional Republicans about the Mueller investigation and that alleges abuse and bias within the FBI and Justice Department.

The four-page memo in part focuses on the controversial, so-called “Trump Dossier” used in the Russia collusion investigations.

“If you’re interested in who paid for the dossier … , then, yes, you’ll want the memo to come out,” Gowdy said.

Trump also wants the memo released, according to a Washington Post story Sunday.

Gowdy suggested that Democrats don’t want the memo released because it would point to them financing the dossier. And he said that Justice knows what’s in the memo because it supplied the documents, but that federal officials should nevertheless review it before its release.

The House Intelligence Committee could vote as early as this week on whether to release the memo.

“I want to play face-up poker,” Gowdy said. “It is not a hit piece on the department and the FBI.”