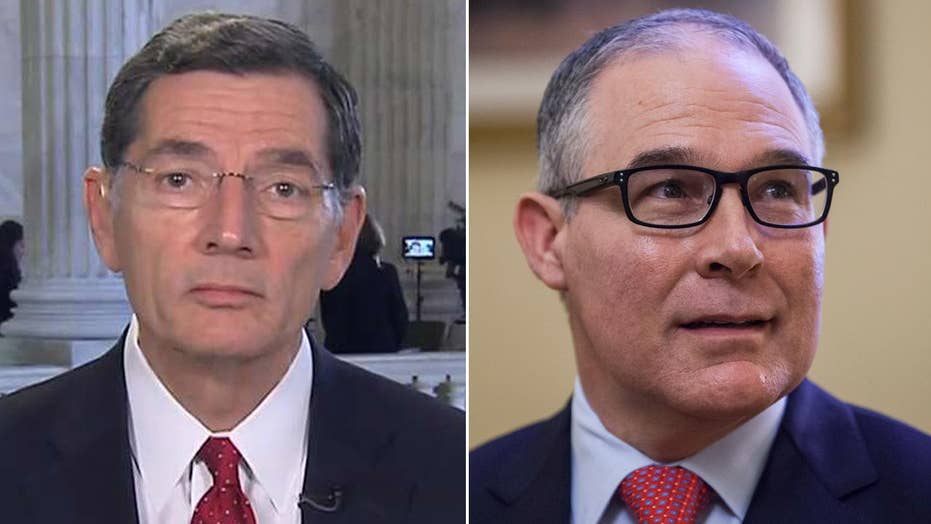 The Senate Environment and Public Works Committee swiftly took up the nomination of Scott Pruitt to lead the EPA after Democrats boycotted a scheduled vote on Wednesday.

As colleagues on another committee did a day earlier to overcome Democratic delays, Chairman John Barrasso, R-Wyo., used a procedural maneuver to suspend committee rules requiring at least two Democrats to be present for a nomination vote.

With 10 Democrats absent and the rules suspended, the committee easily voted to send the Oklahoma state attorney general forward for consideration by the full Senate.

The move comes as Republicans scramble to advance a series of nominations that have been stalled amid Democratic resistance. In doing so, they've further inflamed tensions with the minority party.

“I am disappointed that our majority has decided to ignore our concerns and those of the American people, and break the Committee's rules in an effort to expedite Mr. Pruitt's nomination,” Sen. Tom Carper said in a statement, referring to efforts by him and others to extract more information from Pruitt.

Carper’s fellow Democrat, Sheldon Whitehouse of Rhode Island, suggested the nominee was engaged in “an effort to hide information from the Senate before his confirmation.”

Barrasso countered that the delay was “unprecedented,” particularly because Pruitt had answered a total of more than 1,200 questions, which is more than the EPA nominees from the Obama, Bush, and Clinton administrations.

He told reporters after the nomination hearing he was confident the Senate parliamentarian would sustain the rules change.

Also heading to the full Senate is the nomination of Rep. Mick Mulvaney to head the Office of Management and Budget (OMB) after clearing two separate committee votes.

The Senate Homeland Security and Governmental Affairs Committee and the Senate Budget Committee voted 8-7 and 12-11, respectively, to approve his nomination.

The homeland security committee was ready to vote on Wednesday, but Ranking Member Claire McCaskill of Missouri called for a delay until she could fully review Mulvaney’s FBI file.

The votes fell along party lines.

Mulvaney’s nomination hit a snag early in the process after the New York Times reported he failed to pay more than $15,000 in payroll taxes on a nanny.

“I have come to learn during the confirmation review process that I failed to pay FICA and federal and state unemployment taxes on a household employee for the years 2000-2004,” conceded Mulvaney.

Sen. John McCain, R-Ariz., voted for the nomination in the committee, but has expressed concerns about Mulvaney’s commitment to strengthen the military considering the nominee’s support for budget cuts. McCain has not committed to backing him on the Senate floor.