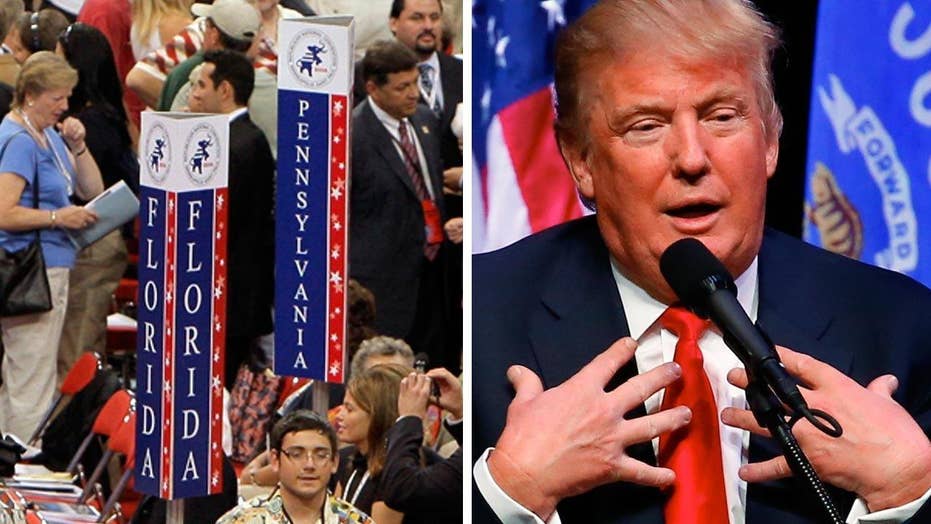 Republican convention delegates and operatives are creating a long-shot movement to change party rules so the convention can choose someone other than Donald Trump to run for president.

According to the Associated Press, more congressional Republicans are not endorsing Trump and are planning to skip the convention in Cleveland next month altogether. Rep. Duncan Hunter, R-Calif., one of Trump’s top House backers, says his support among lawmakers “has stalled.”

"We're acting to save the Republican Party from imminent disaster," said Steve Lonegan, who chaired Sen. Ted Cruz's New Jersey campaign and is helping organize an effort to let delegates chosen to back one candidate vote instead for another.

Lonegan says Cruz is not involved in the effort.

The Washington Post reported that Republicans believe Trump is letting the presidential race get away from him already with his attacks on a federal judge, his renewed calls to ban Muslims from entering the U.S. and his support for national gun law reform.

“This literally is an ‘Anybody but Trump’ movement,” Kendal Unruh, a Republican delegate from Colorado who is leading the effort, told the Post. “Nobody has any idea who is going to step in and be the nominee, but we’re not worried about that. We’re just doing that job to make sure that he’s not the face of our party.”

“The last thing I would do is tell anybody to do something that’s contrary to their conscience,” Ryan says in his interview with the news program Sunday, per The Post.

Others not supporting him or attending the convention include House Energy and Commerce Committee Chairman Fred Upton, R-Mich., who for the first time in his 30-year congressional career is not backing the party nominee.

Ryan, who has said he doesn't want to be an alternative should Trump falter, didn't know Unruh — like him — used the word "conscience," said Ryan spokeswoman Ashlee Strong.

Unruh's group, which Lonegan is helping, is using social media and emails and held a conference call Thursday night to organize efforts to find support.

There's a Plan B. If Unruh can win over one-fourth support from the rules committee — just 29 delegates — the full convention must vote on her proposal. So far she's got around 10 supporters though some prefer delaying the rule's impact until the 2020 convention, she said.

Randy Evans, Georgia's RNC committeeman, says his informal tally suggests it will be a "pretty tall order" to prevent the full convention from voting on unbinding delegates. But he said he expects Trump forces to win a convention floor showdown "pretty comfortably."

"They can make everything look tumultuous," Cindy Costa, South Carolina's RNC committeewoman, said of those attempting to let delegates vote freely. But it would be "a big mistake" and would lose, she said.

Trump has already dismissed any plots that seek to overtake his impending nomination in July in a statement released Friday.

“I won almost 14 million votes, which is by far more votes than any candidate in the history of the Republican primaries,” he said. “I have tremendous support and get the biggest crowds by far and any such move would not only be totally illegal but also a rebuke of the millions of people who feel so strongly about what I am saying.

“People that I defeated soundly in the primaries will do anything to get a second shot — but there is no mechanism for it to happen.”

Previous attempts to boot Trump from the nomination or change the rules to stop him haven’t panned out, but the new Hail Mary approach vows to get a contested convention.

Many say, like him or not, Trump won and efforts to dump him would be crushed and would devastate the GOP. According to The Associated Press, Trump has 1,542 delegates, including 1,447 required by party rules to back his nomination, well above the 1,237 needed for victory.

One catch: Delegates "bound" to one candidate can vote freely in convention rules fights. Delegates could sour on Trump and approve procedures opening the door to an alternative.

"It's a fantasy, it won't happen," said Morton Blackwell, a Republican National Committee member from Virginia who initially backed Cruz.

"We have a responsibility to respect our democracy, and that means we accept the outcome of the vote," said Rep. Austin Scott, R-Ga., who supported the presidential bid of Sen. Marco Rubio, R-Fla.