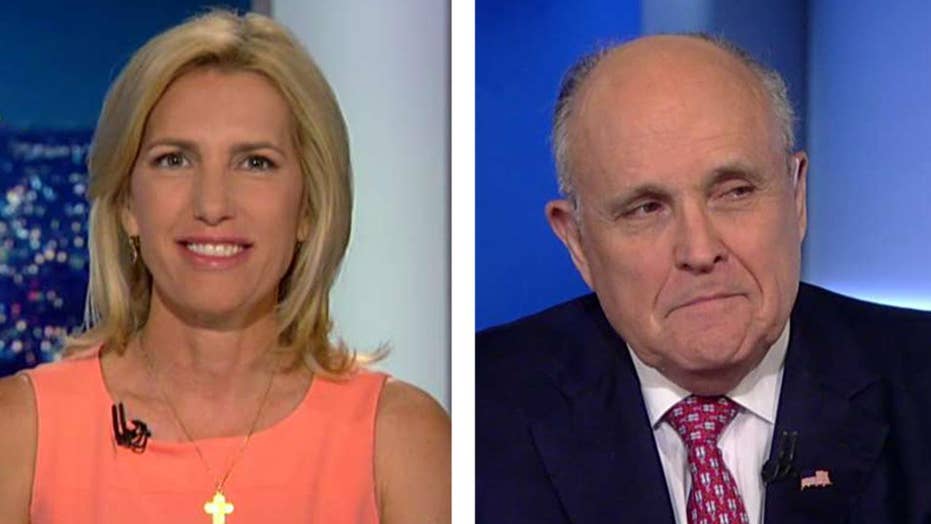 President Trump's attorney Rudy Giuliani says there's nothing for Cohen to cooperate about in regards to Trump and discusses the Mueller investigation on 'The Ingraham Angle.'

Rudy Giuliani, an attorney for President Trump, on Wednesday  tried to put to rest claims that the president's personal attorney Michael Cohen might cooperate with special counsel Robert Mueller's investigation.

“It’s not so. He’s not cooperating nor do we care because the president did nothing wrong,” Giuliani told Fox News’ Laura Ingraham on Wednesday night. “I am absolutely certain of that.”

Reports indicated that Cohen might have been looking for new lawyers.

“Michael Cohen I think would tell you he’s got nothing incriminating with the president,” he said. Giuliani said he would be “comfortable” if Cohen chose to cooperate with authorities.

Giuliani said a greater concern is the length and the costly investigation headed by Mueller.

Giuliani maintained that there is no evidence of collusion and that the claim of obstruction of justice is completely “negated” by the fact that “the president can fire anybody he wants for any reason he wants.”

Giuliani added that despite urging the president against it, Trump “wants to testify” because he believes he “did nothing wrong” and can stand up to any line of questioning.

Giuliani estimated that the ultimate decision on whether Trump will give his testimony to Mueller will come in the next week or two.

He further clarified that “the decision” could mean “battling over a subpoena” or preparing for a “small, tailored, limited interview” with the special counsel.

“What they are talking about is they were bitter over losing the election and some of the people right in Mueller's office were the ones crying -- crying like babies the night that Hillary lost,” Giuliani said. “They are trying to delegitimize him.”