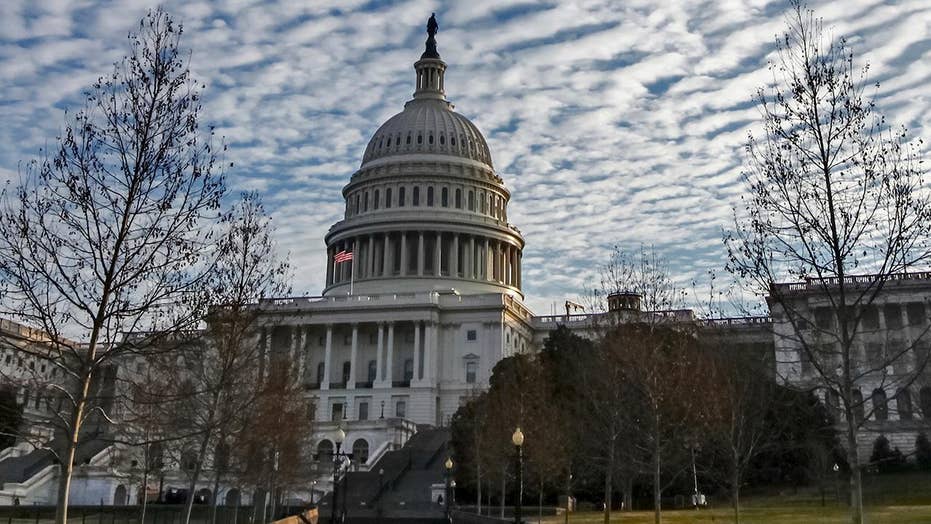 Conservatives and establishment Republican lawmakers clashed Thursday ahead of a key vote on a massive $1.3 trillion spending bill -- in particular over the funding of President Trump’s central campaign promise of a wall on the southern border.

Trump had requested $1.6 billion in funding for the border wall, with additional money for border technology, and appeared to have secured that in the spending bill. But a closer look indicates that it differs from what Trump requested.

Some $251 million for 14 miles of “secondary fencing” along the southwest border in the San Diego Sector.

It also funds $445 million for 25 miles of “primary pedestrian levee fencing” along the southwest border in the Rio Grande Valley Sector, as well as an additional $196 million for fencing along the same border. White House budget director Mick Mulvaney indicated this would be an additional eight miles, less than the 32 miles the White House requested.

It also gives $445 million for the “replacement of existing primary pedestrian fencing along the southwest border.”

An additional $38 million is for border barrier “planning and design” as well as $196 million for acquisition and deployment of “border security technology."

Yet even that money comes with strings attached. The omnibus says that the only designs that can be used are those already approved in 2017, “such as currently deployed steel bollard designs.”

Mulvaney said that in addition to the 63 miles of replacement barriers included, which the White House did not request, they also got more money than requested for technology and facilities. He said the White House was happy with the immigration provisions even as he conceded that they were not able to get everything they wanted.

"We asked for 74 miles worth of wall, we got 100," Mulvaney said. "Not exactly what we wanted, where we wanted. Congress chose to ignore some of the suggestions that [Customs and Border Protection] made on where the best kind of wall should go and that's unfortunate."

The omnibus also does not include the cutting of funding to sanctuary cities, nor does it increase the number of detention beds or ICE deportation agents -- two items that Trump had wanted in.

Both House Speaker Paul Ryan, R-Wis., and President Trump said the bill does, in fact, fund the wall. The White House said in a statement Wednesday that it funds "more than 100 miles of new construction for the border wall" while Trump tweeted that it would start the wall and that the rest would be "forthcoming."

He also played up the technology provisions: "You can't build a wall over a mountain, so you need cameras and you need drones up there, so it's a border wall system that the Border Patrol tells us they need."

He noted that at different parts of the border, different barriers are required, with fencing in some areas and levees in others, and that they had listened to Border Patrol officials about what they needed in different areas.

But conservatives pushed back, saying that the funding for the type of wall that Trump has promised, and previewed this month in California, was non-existent. Critics pushed back not only on the fact that it would be existing models, but also noting that the "100 mile" figure included areas that are being repaired.

"The money they have allocated for additional border security is woefully inadequate," Jessica Vaughan at the Center for Immigration Studies told Fox News. "It appears that Congress is allowing only 33 miles of new barriers, and only using the old-style fencing, not allowing a modern wall construction such as the prototypes that were developed."

"DHS will be able to do more planning, but the new wall project is basically stifled," she added, while also describing the failure to penalize sanctuary cities as "equally concerning."

Rep. Jim Jordan, R-Ohio., offered a list of concerns for the bill, noting its big spending and other features such as a failure to defund Planned Parenthood. But he challenged the narrative on the wall.

“The one thing we don’t fund is the one issue we all campaigned on -- a border security wall -- and that is not in the legislation,” he said. “So it can’t get any worse than this bill.”

“This bill does not provide adequate funding for border security. $1.5 billion will be minimally effective in delivering not just our promise, but your promise, to build a wall and keep our country safe,” the letter said.

“The American people elected us not to buckle, but to deliver,” the letter read.

The narrative was supported somewhat by Democrats, who cheered at the development, with House Minority Leader Nancy Pelosi hailing the money as a win for Democrats despite their failure to get a DACA fix in the bill.

“Democrats won explicit language restricting border construction to the same see-through fencing that was already authorized under current law,” she said. “The bill does not allow any increase in deportation officers or detention beds.”

She added that she was “disappointed” that they did not reach agreement on DACA.

The House was due to vote on the measure early Thursday afternoon as lawmakers rush to get the bill through Congress before Friday night in order to avoid another government shutdown.

A senior congressional GOP source told Fox News that the White House had proposed $25 billion for the wall in return for a three-year DACA fix, but talks had broken down when Democrats said they wanted citizenship for an expanded DACA population of 1.8 million people.

The source said that Ryan followed up with a second offer that moved toward Democrats by offering an age-in proposal to expand the DACA population. But Senate Minority Leader Chuck Schumer, D-NY, rejected that offer.