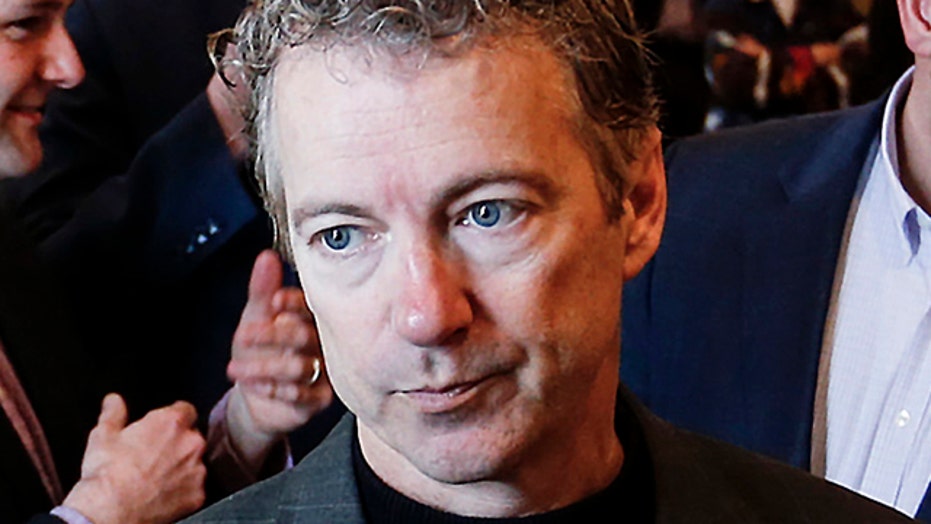 Will Rand Paul have an advantage in early primary states?

Chuck Rocha and Katrina Pierson on the Kentucky senator's 2016 chances

"If it weren't for Jesus, we'd all be one and done," a churchgoer at the Broadway United Methodist Church explained to nods of agreement at the start of Easter service.

When the service ended, Paul left the sanctuary, posed for one picture and shook a few hands while the other congregants quickly passed by without so much as a double take of the man in the nicely pressed suit. They were seemingly unaware that Paul, who had just worshipped with them, would in 48 hours announce his presidential ambitions in a nationally televised speech.

The Tuesday speech -- perhaps the most important of his political career -- didn't seem foremost on Paul's mind, either. Instead, it was getting behind the wheel of his American-made SUV and waiting for his wife Kelley and youngest son to emerge from the church tucked away inside an unassuming neighborhood.

The low-key family church outing (involving no aides, security or other hangers-on) is fully in line with the man Paul's Bowling Green friends describe.

"He's not the guy who makes a point of standing out in a crowd," Brian Strow explained.

In interviews with Fox News, Strow, an economics professor at Western Kentucky University, and other Paul friends talked about the man they've known for the past couple decades as simply "Rand" or "Dr. Paul" -- before he became the firebrand lawmaker known for his libertarian streak and, more recently, lofty ambitions.

"He was a good guy before he became senator," Rob Porter noted.

The Republican senator's arrival to Bowling Green, a place where people still wave to out-of-towners who pass by, has been fairly well documented. Growing up, Paul followed his parents from Pennsylvania to Texas before getting his medical degree in North Carolina with some time in Georgia, too. It was there that Paul met Kelley, but it's here in south-central Kentucky they've raised their three children.

"When I moved to Bowling Green -- [I was told if] you have a problem with your eye, you go see Dr. Paul," Travis Creed explained about his ophthalmologist friend and neighbor.

Another friend figures that Paul's early focus on his medical practice and parental responsibilities kept him from fully engaging in politics. But Paul still had his eye on shaping public policy.

In 2004, Strow was running for a spot on the city commission when he says Paul, whom he had never met, cold-called him offering assistance. Paul explained that he liked some of the positions Strow was taking -- especially on taxes -- and offered to host a fundraiser.

Strow won the race but says the measure of Paul's character shined through when the city was considering a proposal to publicly bankroll a $25 million stadium for a minor league baseball team. Paul opposed the idea. Strow voted for it anyway.

"That annoyed Rand to no end," Strow recalled with a slight chuckle. Strow then added that Paul didn't hold a personal grudge or needlessly needle his new friend about that vote. "It speaks well of him."

"I always found him direct and honest even when he disagreed with me," Buchanon said. "He's a very serious guy about the things you're supposed to be serious about."

While some were surprised about Paul's decision to run for Senate five years ago, Porter, a banker in Bowling Green, said he saw signs that Paul's political ambitions were calling.

First, Paul was regularly writing letters to newspaper editors -- usually about taxes since he founded an advocacy group dedicated to fighting increased taxation. Then in 2008, Paul's father, former Rep. Ron Paul, made a run for the White House.

"People saw in Rand, maybe, a place for him on the U.S. stage while speaking for his dad" during that campaign, Porter said.

The rap on Paul by some of his detractors is that he's out of the mainstream and in some ways an isolationist, though it's a label he denies. If he enters, as expected, on Tuesday, he'll automatically be in a race against the hawkish Texas Sen. Ted Cruz, who has announced his presidential bid and is sure to challenge Paul on his national security credentials.

Sen. Lindsey Graham, R-S.C., another security-focused Republican weighing a bid, took a few swipes at Paul during a local Chamber of Commerce event in South Carolina on Monday, accusing his fellow senator of having a foreign policy "to the left of President Obama." It's a narrative Paul would have to confront early on in the primaries.

But if Paul were to run and win the White House, there's at least one thing about him that's in the mainstream of modern presidents: He's a golfer.

Paul has a reputation as a good player, often shooting in the 80's. He likes to walk and is chatty on the course. Before his Senate election, he frequently played at the Bowling Green Country Club -- which is more country than club -- on the outskirts of town.

The Graves-Gilbert Clinic in Bowling Green, where Sen. Rand Paul worked for many years before starting his own practice. (FNC)

Fox News is told Paul can be competitive on the course where he'll work on a swing tip he's picked up or engage in some good-natured trash talking with a member of his foursome. This is especially true if there's something at stake on the outcome of the match -- often a Diet Coke.

When the round's done, Paul isn't likely to linger too long at the course. As one friend described, "daddy duty" encourages a swift departure to take his boys to sporting events, practices or other school-related activities.

The Paul family lives in a gated community 10 minutes from downtown. Friends describe it as a tight-knit neighborhood where summer cookouts are popular.

"Kelley is very engaging and social," Porter said. "She makes you feel at home in their house."

The kitchen and a back deck, which overlooks a community pond, tend to be the gravity points for everyone to gather. It's in this setting that Porter says "[Rand]'s really become a Kentuckian," sipping bourbon with his guests.

It shouldn't be a surprise that the friends Fox News spoke with support Paul's expected presidential bid.

"I want Rand to succeed in politics," Strow said. "But if he doesn't, I'll be happy to have my eye doctor back."