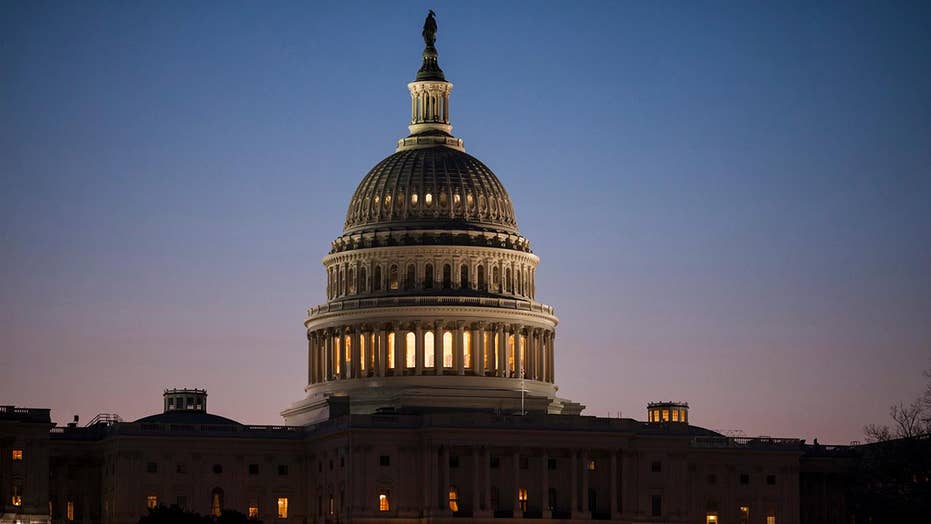 Balance of power in the Senate and House

Leland Vittert breaks down the state of the Senate and House races.

On the roster: Fox News Power Rankings: Finishing touches - I’ll Tell You What: Corn chips and butter - Scouting report - Audible: Donate here often? - Do it for the Insta

Same goes for the Halftime Report, too. We’ve been ranking and re-ranking races in the Fox News Power Rankings for 11 months. And along the way, we’ve been tracking the overall views of voters for which party they would like to see have control of the House.

And we are glad to say that today brings us to the end of that process. Tomorrow will be for tabulations and projections, early calls and late counting. On this election eve, we have just a few minor adjustments to make to the rankings and a few more polls to check – the equivalent of hanging our stockings by the chimney with care.

Before we get to those, let’s look at where we finished.

In the battle for control of the House of Representatives, we’re tracking 76 different races that we see as at least somewhat competitive. Republicans have a 23-seat majority, but start with less cushion that that. There are six seats expected to change hands – places where the parties are essentially not contesting a turnover. Five are Republican seats, one is Democratic, so that puts the GOP essentially down four before voting begins.

That means Democrats need just 19 more seats to take control of the House. Of the 76 districts where we see that battle unfolding, only six have Democrats playing defense. Out of those 76, there are 29 that appear to be the most competitive – the true toss ups. Among those, Democrats are only defending one district and playing offense in the other 18.

Now, maybe Republicans will pitch almost a shutout and manage not to lose 20 of the 70 seats they’re defending, but that would be quite a feat, especially given what we know about national voter attitudes. When we started keeping track of the so-called “generic ballot”

When we started back in January, Democrats’ average advantage stood at 8.4 points. Over the weeks, that number bounced around a bit, but generally stayed in the same register. Today, as we close up shop on the average until 2020, the Democratic advantage stands at 9.2 points

Given the political geography of the country, voter turnout proclivities and some gerrymandering Democrats have needed to be substantially outperforming Republicans in this measure to be competitive. But with a deficit of more than eight points, Republicans would need a larger degree of polling error than what we’ve seen before to comfortably hold the House. It might happen, but it looks like a pretty long shot.

In the Senate, it’s the Democrats who start with the deficit. Sen. Heidi Heitkamp, D-N.D., might somehow win, but we don’t see a path. That means that to have a shot at winning the Senate, Democrats would have to run the table elsewhere in order to gain the three net seats they would need to take control.

We have 11 Senate races that we see as at least somewhat competitive. Of those, six are held by Democrats – Montana, New Jersey, West Virginia, Florida, Indiana and Missouri – and five are held by Republicans – Nevada, Arizona, Texas, Tennessee and Mississippi. Of the five most competitive races, three are Democratic – Missouri, Indiana and Florida – and two are Republican – Arizona and Nevada.

Now, it’s certainly possible that Democrats will win in both Arizona and Nevada. But it sounds more far-fetched to think that they will do so but not lose anywhere else. And that’s related to another number we have been tracking all year: Voters’ average approval of the job President Trump is doing.

In January, Trump was almost 17 points underwater. A government shutdown, scandals, turmoil and general confusion had overshadowed good feelings among Republicans about the end-of-year tax cut the GOP had pushed through. But after 11 months of a rip-roaring economy and a second Supreme Court nomination win, the GOP has mostly reunited and helped trump improve his score by nearly 7 points.

Being 11 points underwater isn’t great, but not only is it better, it’s driven by higher satisfaction among Republicans. And it’s in Republican-heavy states where Democrats need to score. As our most recent round of polls showed, Trump is at 50 percent or better in many of the states where key contests are being held.

And with the president barnstorming those states with a fearsome message about a Hispanic invasion force populated by leprous murderers marching toward the border, one imagines that his core supporters are not going to sit this one out. Even if it’s a good night for Democrats overall, Republicans have a reliable red-state firewall in the Senate.

We have two small final changes to make in our ratings overall, and one that’s more significant.

The Illinois governor race isn’t competitive by any measure. Republican Gov. Bruce Rauner would have needed both luck and great skill as a candidate in order to survive against billionaire J.B. Pritzker in a Democratic state in a Democratic year. Rauner had neither. The race goes from “Lean Democratic” to “Likely Democratic.”

We’re also moving the race in Arizona’s 2nd Congressional District, the seat Rep. Martha McSally is leaving behind, from “Lean Democrat” to “Likely Democrat.” Former Democratic Rep. Ann Kirkpatrick appears to be too well known and too well funded in a Democrat-trending district for Republican Lea Marquez Peterson to catch up.

One of our favorite races this year is in South Dakota, where popular Republican Gov. Dennis Daugaard is term-limited. The race to replace him is between Republican Rep. Kristi Noem and state Senate Minority Leader Billie Sutton.

The candidates in South Dakota have run a civil, issue-oriented campaign. They have been truthful and focused on their state’s future, both casting themselves as pragmatic problem solvers willing to work across the aisle to address issues important to members of both parties. It has been a breath of fresh air and brought credit to both candidates.

It’s a heavily Republican state, but Sutton has managed to make a race of it. We move the race from “Likely Republican” to “Lean Republican.” But the people of the Mt. Rushmore State have already won by having candidates who aren’t talking down to them.

THE RULEBOOK: YOU CAN CHANGE YOUR MIND, BUTTTT…
“But the authority extends no further than to a GUARANTY of a republican form of government, which supposes a pre-existing government of the form which is to be guaranteed. As long, therefore, as the existing republican forms are continued by the States, they are guaranteed by the federal Constitution.” – James Madison, Federalist No. 43

TIME OUT: HOME HISTORY
Smithsonian: “In the 1960s, Lavern Meggett was growing up on Edisto Island, South Carolina, with her family. Her family members had lived on the island for generations, and there was one home on the island that was particularly special—her grandmother’s. It was a small cabin with no running water or electricity. … The cabin—home to Meggett’s grandmother and generations before her—became vacant in the 1980s when the last family member moved out. But a few years ago, the cabin saw new life when the empty dwelling became a centerpiece of the Smithsonian’s National Museum of African American History and Culture (NMAAHC). … It turned out that the Meggett’s home had a documented history dating to 1853, something the family knew little about. Their grandmother’s home was originally built as a cabin for those who had been enslaved on Edisto Island. … The small abode was accessioned into the Smithsonian because it conveys what [Mary Elliott, co-curator of the ‘Slavery and Freedom’ exhibition,] describes as ‘the harsh reality’ of America’s past.”

I’LL TELL YOU WHAT: CORN CHIPS AND BUTTER
And down the stretch they come… On a special episode of I'll Tell You What, Dana Perino and Chris Stirewalt discuss the many questions surrounding this Tuesday's midterm elections. LISTEN AND SUBSCRIBE HERE

SCOUTING REPORT
Tomorrow’s the day we’ve all been waiting for. Since Election Day is finally here that means final polls nationwide are in too. With that in mind, we decided to find the averages of some of the Senate and governor races we are watching.

We should point out, however, that there are other races we are watching too. Those races did not have enough polling available to find the averages (*ahem* looking at you Montana and West Virginia).

Below you will see the breakdown of the three to five methodologically sound polls we used to calculate the averages. Looking at the results of this experiment we can tell a couple of things. The first being that some candidates have a clear lead. The second is that some of these races are prettttty darn close.

The one thing we know for sure: The only poll that matters is the one on Election Day.

AUDIBLE: DONATE HERE OFTEN?
“Sometimes I hit up people in the lobby, and I fundraise from that. If you’re at a bar having a conversation with somebody, and you’re having a drink, [then] casually, the conversation can go to your campaign.” – Omar Navarro, the Republican attempting to unseat Maxine Waters, D-Calif., discussing how he enjoys spending time at Trump properties where he can interact with supporters and get donations.

DO IT FOR THE INSTA
Fox News: “One woman lent a helping hand to her newly engaged cousin in a now-viral photo. Twitter user @goodgaljenjen shared a photo on Saturday showing a couple apparently kissing -- with a manicured hand showing off the engagement ring in front of them. However, a second photo showed @goodgaljenjen -- who lists her name as Jenna -- was actually wearing the sparkler as part of an optical illusion while holding her phone in her other hand as she was next to the couple. ‘My cousin’s boyfriend proposed to her but she didn’t have her nails done lmao,’ Jenna, whose Twitter lists her as based in Melbourne, Australia, wrote when sharing the images in the tweet, which has been retweeted more than 207,000 times and liked more than 863,000 times. Jenna later posted the photo she captured on her phone, too. She also offered some background on the proposal in another tweet about the couple. ‘Diana is a nurse so she never has her nails done. José planned this surprise proposal & couldn’t really get her to do her nails without raising suspicion,’ she said.”

AND NOW, A WORD FROM CHARLES…
“In explaining any puzzling Washington phenomenon, always choose stupidity over conspiracy, incompetence over cunning. Anything else gives them too much credit.” – Charles Krauthammer (1950-2018) writing in the Washington Post on Oct. 19, 2007.