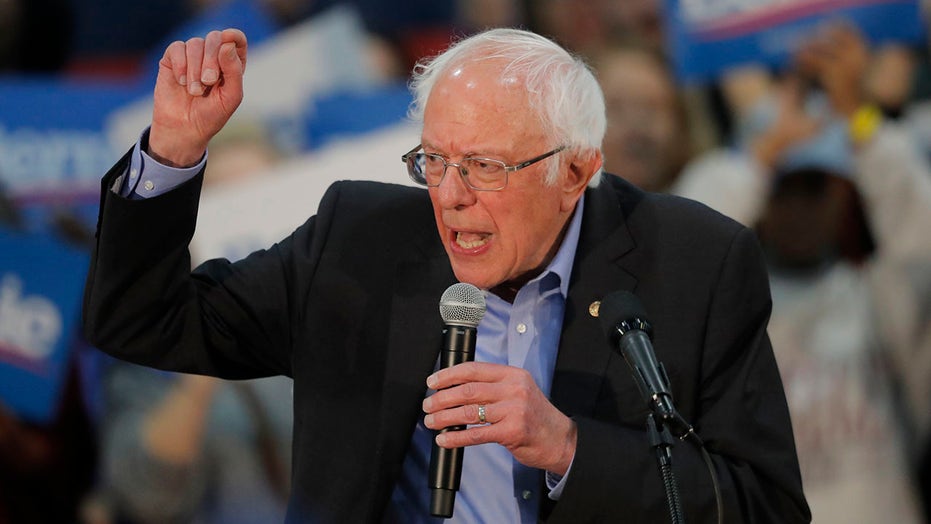 Study reveals why young voters may be flocking to Bernie Sanders

Bernie Sanders pushes Joe Biden out of the frontrunner spot for the Democratic nomination, capturing a record 31 percent support among primary voters in a new Fox News Poll. This is the first 2020 Fox national poll that finds Biden not leading the Democratic race.

The survey also finds a marked increase in the number of voters who think President Trump will win the election.

Sanders has gained 8 percentage points since January in the nomination race, while Biden drops into second with 18 percent, down 8 points. Close behind is Mike Bloomberg at 16 percent, up 6 points since last month and triple his 5 percent in December. Pete Buttigieg comes in at 12 percent (up 5), Elizabeth Warren at 10 percent (down 4), and Amy Klobuchar at 5 percent (up 2).

This is the first Fox News poll with five candidates in double digits. It was conducted Sunday through Wednesday. Sanders, notably, was the most attacked candidate during Tuesday’s contentious presidential debate in South Carolina.

Sanders performs well with groups across the board, with an extra boost from young voters, self-described liberals, whites without a college degree, and those looking for change.

Biden is strongest among women over age 45, voters who regularly attend religious services, and those who long for a return to the pre-Trump era.

The nomination race looks almost the same when narrowed to Democratic primary voters in the 14 Super Tuesday states: Sanders remains on top with 30 percent, followed by Bloomberg at 18 percent, Biden 17 percent, Warren 11 percent, and Buttigieg and Klobuchar each get 8 percent.

Overall, majorities of primary voters think Sanders (65 percent), Bloomberg (57 percent) and Biden (56 percent) can beat Donald Trump. Since December, the number believing Sanders can win is up 5 points (was 60 percent).

But Democratic voters’ faith in most of the other candidates is shaken since December. The portion saying Biden can win is down 21 points (from 77 percent), while Warren (-22 points) and Buttigieg (-12) also saw declines.

Democrats remain divided on central questions facing their party. By a 10-point margin, more want a nominee who will fundamentally change how the political system works (52 percent) than want someone who will restore the system to pre-Trump administration (42 percent).

There is a similar divide over whether they prefer a nominee who is a pragmatist or a visionary: by a 9-point margin, more are looking for a candidate who will pursue “practical centrist” policies (49 percent) than want someone who will pursue “bold liberal” plans (40 percent).

Those wanting change prefer Sanders by more than 20 percentage points. Biden is the favorite for those wanting to hit reset, although he leads by a narrower 9-point margin. It’s important not to overstate these differences, as Sanders is the second choice among restore voters and Bloomberg comes in second among change voters.

When asked if there is a candidate primary voters could not support, Bloomberg and Sanders (18 percent each) have the largest number saying they would refuse to vote for them in November, followed by Biden and Warren (13 percent apiece) and Tulsi Gabbard (10 percent).

Forty-five percent of Democratic primary voters say they would vote for any one of the current candidates over Trump.

There is no hurry to narrow the field. Fifty-four percent of primary voters want candidates to stay in the race even if they failed to finish in the top three in any of the early contests. What’s more, by a 50-38 percent margin, they say the Democratic Party should have the flexibility to nominate someone else if no candidate has a majority of delegates at the convention.

Sanders, as the candidate currently best positioned to win the most delegates, thinks the candidate with the delegate lead should win the nomination, even if it isn’t a majority. The other top candidates support flexibility if no candidate has a majority.

In general, 75 percent of all Democratic primary voters and 67 percent of Sanders supporters feel confident the Democratic Party’s process of picking a nominee is fair.

Among all voters, all six Democratic candidates tested top the president in trial ballots. Trump trails Biden and Bloomberg by 8 points and Sanders by 7. Those are the only leads outside the poll’s margin of error.  Warren (+3 points), Buttigieg (+3) and Klobuchar (+1) are barely ahead. And in each instance, there are enough undecided/third-party voters to move the race either way.

Forty-two percent would vote to re-elect Trump if the election were today. That’s up from 38 percent in May 2019 and the largest share he’s received to-date.

On the other side, a majority of 52 percent would vote for someone else. That puts the president underwater by 10 points, an improvement from a net negative of 16 points in May 2019.

Despite those findings, 56 percent think Trump will be re-elected. That’s up from 44 percent in October.  Expectations increased among Republicans (+9 points) and Democrats (+16). Eight years ago, 52 percent thought former President Obama would be re-elected.

Biden (50 percent) and Sanders (49 percent) have the highest favorable ratings -- and have more who view them positively than negatively. Biden’s net favorability rating is best (+4 points), followed by Sanders (+2), and Buttigieg (+1). Klobuchar is net neutral, and the ratings for Warren (-4), Steyer (-7), Bloomberg (-8), and Trump (-11) are underwater.

Voters favor giving everyone the option to buy into Medicare by a 67-23 percent margin and making minor changes to Obamacare by 58-32 percent. A 49-percent plurality opposes getting rid of private insurance and moving to a government-run health care system (42 percent favor).

The poll, released Thursday, asks Democratic primary voters if any candidates may not be physically healthy enough to carry out the job of president. Sanders is the most frequently mentioned at 30 percent, followed by Biden at 16 percent. Nearly one in five Sanders supporters thinks he may lack what it takes to do the job physically.

Among all voters, 63 percent think presidential candidates should be required to release their full medical records, and 70 percent say the same about tax returns.

Conducted February 23-26, 2020 under the joint direction of Beacon Research (D) and Shaw & Company (R), this Fox News Poll includes interviews with 1,000 randomly chosen registered voters nationwide who spoke with live interviewers on both landlines and cellphones. The poll has a margin of sampling error of plus or minus 3 percentage points for all registered voters and 4 points for Democratic primary voters (507).