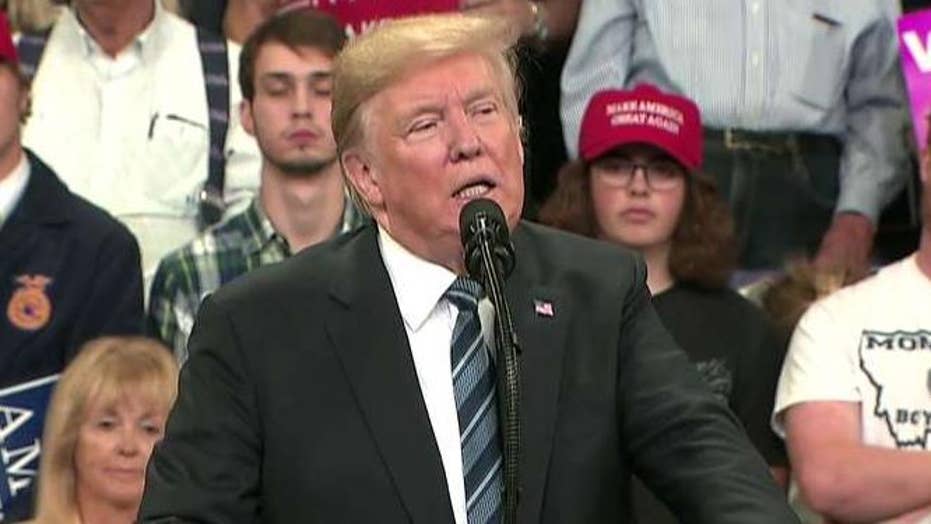 President Trump, in an exclusive "Fox & Friends" interview with Pete Hegseth, blasted the anonymous author who slammed his leadership in a New York Times op-ed, calling it “treason” and speculating a “deep state person” could be behind it.

The publication of the article, which described a secret inside effort to protect the country from Trump’s “misguided impulses,” has touched off a furious hunt for the author. A slew of Cabinet-level officials and others have scrambled to deny responsibility and condemn the writer.

Trump, in the interview which aired Friday morning, said the Times should not have even had the piece.

But he went on to complain that the author’s anonymity made the piece difficult to combat.

“What’s unfair, I don’t mind when they write a book and they make lies because it gets discredited,” he said, adding that it’s challenging “when somebody writes and you can’t discredit because you have no idea who they are.”

He speculated, “It may be a deep state person who’s been there a long time. It’s a very unfair thing.”

He said there are thousands of people who could be considered a White House senior official.

“So they take one person out of thousands,” Trump said.

Trump said it appears that the individual is fairly low level. He said despite the claims in the piece, the White House is running like a “well-oiled machine.”

Trump spoke to Fox News before his Thursday rally in Billings, Mont.

“I guess when you get right down to it, it is up to me. But I don’t want to do anything that’s going to hurt us or potentially hurt us,” he said. “I have a feeling that the Republicans are going to do very well.”

Trump blasted Nike’s decision to tap Colin Kaepernick as one of the faces of its 30th anniversary "Just Do It" campaign.

“I don't like what Nike did,” Trump said. “I don't think it's appropriate what they did. I honor the flag. I honor our national anthem. And most of the people in this country feel the same way.”

Asked about Special Counsel Robert Mueller’s Russia probe, the president insisted his campaign did not work with the Russians in the 2016 campaign.

He hit the media for its coverage of his White House, arguing they focus on negative stories and don’t give adequate attention to positive developments, like North Korean leader Kim Jong Un recently saying he’s committed to denuclearization during Trump’s first term.

“They don't want to write that. They only want to write bad when it comes to us and it's a shame,” Trump said. “The level of unfairness and bias in the press is actually incredible. But, in the meantime, we are winning, folks, be happy because we are winning.”