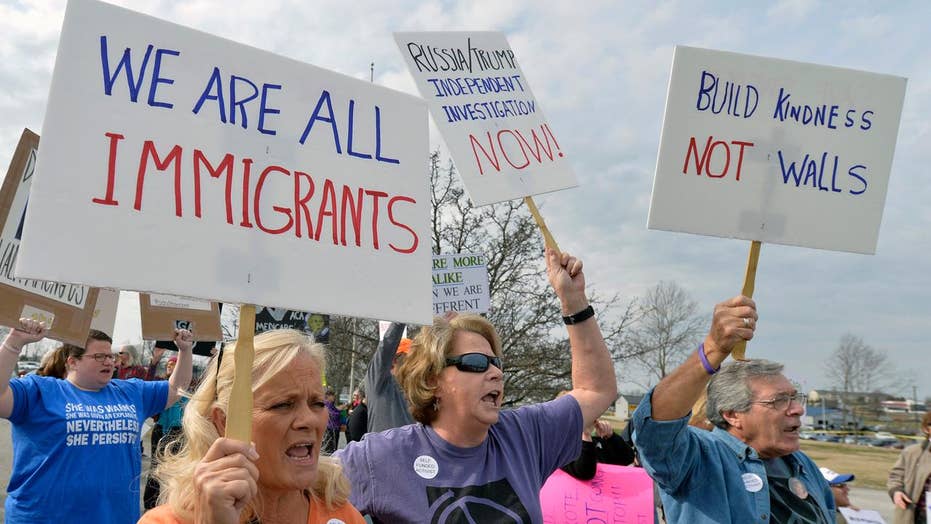 Is the left's Trump outrage backfiring?

Protests could be having opposite effect

Since President Trump’s inauguration, Republicans have triggered a steady churn of outrage from the left over perceived gaffes, errors and omissions.

Some of it has been rightly deserved (see: erroneous Trump tweet on Gitmo prisoners). Some of the desk-thumping, however, has more than a hint of hypocrisy -- as that outrage machine was largely silent when similar comments were made by the Obama administration.

Here are just a few examples of statements met with thunderous criticism when uttered by Republicans, yet crickets when made by Democrats:

HUD Secretary Ben Carson, speaking to department employees earlier this week, sparked outrage when he referred to slaves as “immigrants.”

The NAACP and Chelsea Clinton were both among those offended by Carson’s comparison. Actor Samuel L. Jackson tore into Carson in an R-rated tweet.

The problem was, then-President Barack Obama made a similar comparison before.

"It wasn't always easy for new immigrants. Certainly, it wasn't easy for those of African heritage who had not come here voluntarily and yet in their own way were immigrants themselves," he said at a 2015 naturalization ceremony.

Lots of nastiness directed @RealBenCarson - but in 2015 President Obama also referred to the slaves as immigrants https://t.co/0sinrwgQs3 pic.twitter.com/OSzfbrweHb

The Federalist went so far as to dig up 11 times Obama had referred to slaves as immigrants, and noted there was barely a peep of outrage each time. What changed?

Lay off the iPhones

Twitter was apoplectic when Rep. Jason Chaffetz, R-Utah, recently said Americans may have to choose between buying a new iPhone and health insurance.

"Well, we're getting rid of the individual mandate. We're getting rid of those things that people said that they don't want. ... Americans have choices, and they've got to make a choice," he said on CNN. "So rather than getting that new iPhone that they just love and want to go spend hundreds of dollars on that, maybe they should invest in their own health care.”

Chaffetz was accused of everything from being OK with poor people dying to “reviving the ‘poverty is a choice’ argument."

Yet the criticism glossed over similar remarks made by Obama in 2014.

Asked in a Spanish-language town hall about those who said they can’t afford premiums, Obama speculated about someone making $40,000-$50,000 a year, who thinks an insurance option that costs $300 a month is too much.

“I guess what I would say is if you looked at that person’s budget and you looked at their cable bill, their telephone … cell phone bill, other things that they’re spending on, it may turn out that they just haven’t prioritized health care because right now everybody is healthy," he said.

Some were put out after the Trump team recently put out green versions of his famous “Make America Great Again” hats, branded with a four-leaf clover. While said clover is considered a symbol of good luck, some Irish news outlets and others on Twitter grumbled that the three-leaf clover was more appropriate.

“The shamrock is a three-leaf sprig of clover and is associated with St Patrick's Day,” The Irish Independent complained. “The four-leaf clover is a plant, that's rarer in abundance. It's also a sugary, oat piece that's usually found in a box of Lucky Charms cereal.”

Yet Obama did something similar in 2012 when his campaign produced an “O’Bama” shirt with a four-leaf clover. While the error was noted, it produced little outrage, and even some apologists.

“I think that’s creative license,” Kevin O’Neill, a professor of Irish History at Boston College, told The New York Times.” If you can add an apostrophe, why not a leaf.”

A Trump White House statement on International Holocaust Remembrance Day provoked condemnation when it left out any reference to Jewish people – the main target of Hitler’s genocidal atrocities.

“It is with a heavy heart and somber mind that we remember and honor the victims, survivors, heroes of the Holocaust. It is impossible to fully fathom the depravity and horror inflicted on innocent people by Nazi terror,” the statement said.

A number of Jewish groups were critical of the omission. But former Democratic vice presidential candidate Tim Kaine, D-Va., went further by comparing the statement to Holocaust denial.

White House Press Secretary Sean Spicer blasted the controversy as “nitpicking.” He said: "To suggest that remembering the Holocaust and acknowledging all of the people -- Jewish, gypsies, priests, disabled, gays and lesbians -- it is pathetic that people are picking on a statement."

But Kaine’s comments in particular were striking considering his former running mate – former Secretary of State Hillary Clinton – released a statement in 2013 that also did not mention the Jewish people.

The statement said: "Each year, we gather together to commemorate the victims of one of the worst tragedies in human history. Indeed, almost 70 years after the end of World War II, we continue to honor those lives that were brutally taken during the Holocaust by the Nazis. This machinery of systematic extermination also took the lives of Roma, gays, persons with disabilities, and others deemed inferior or undesirable by the Nazis."

The statement did condemn Holocaust denial, while also mentioning other genocides, including in “Cambodia, Srebrenica, Rwanda and Darfur.” 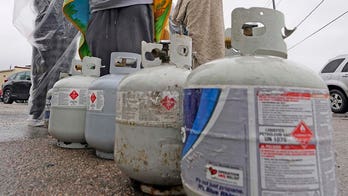