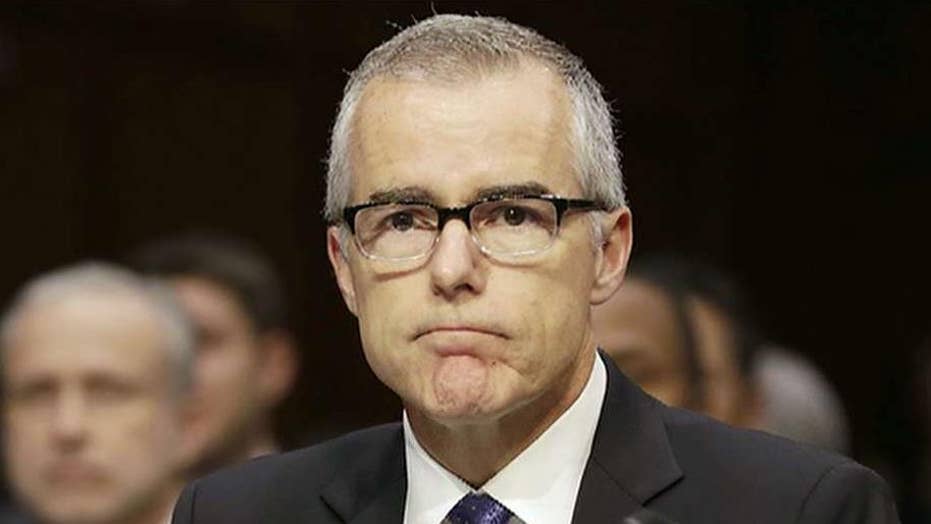 Lawyers representing former FBI Deputy Director Andrew McCabe filed a suit against the Justice Department and FBI on Tuesday, alleging that they wouldn't give up files connected to his ouster.

McCabe’s lawyers claimed the Justice Department has denied access to the sought-after information out of concern that the documents could be later used against them, the lawsuit said. The suit also named the office of the DOJ inspector general.

“We don’t create or adjudicate under secret law or procedure,” David Snyder, a lawyer representing McCabe, told The Associated Press.

A representative for the Justice Department did not immediately respond to Fox News' request for comment.

McCabe was fired in March just a few days shy of his retirement by Attorney General Jeff Sessions after it was reported that McCabe leaked a story to the press and later lied about it to former FBI Director James Comey.

His dismissal followed a report from the inspector general's office earlier this year that concluded McCabe repeatedly deceived investigators. It referred the matter for potential criminal prosecution to the U.S. attorney's office in Washington. McCabe has denied the allegations and said that when he thought his answers were being misunderstood during interviews with investigators, he tried to correct the record.

According to the lawsuit, McCabe's firing came after "proceedings that violated federal law and departed from applicable administrative rules, standards, policies and procedures." It noted that the Freedom of Information Act (FOIA) requires related documents to be produced for review.

"Defendants, however, have not disclosed those materials, whether proactively or upon request from Plaintiff as counsel for Mr. McCabe. That failure is contrary to law," the lawsuit said. "It is incongruous with Defendants' public, and repeated, representations to the effect that Mr. McCabe was dismissed from the FBI following an 'extensive and fair investigation' which was carried out 'according to Department of Justice procedure.'"

McCabe's lawyers signaled they wanted "immediate" access to documents including an inspector general manual outlining the guidelines governing the office and FBI policy guides on how disciplinary matters should be handled.

McCabe's lawyers said they wanted the records as they "seek to vindicate Mr. McCabe's rights and restore his good name," and as they weighed whether to take more legal action.