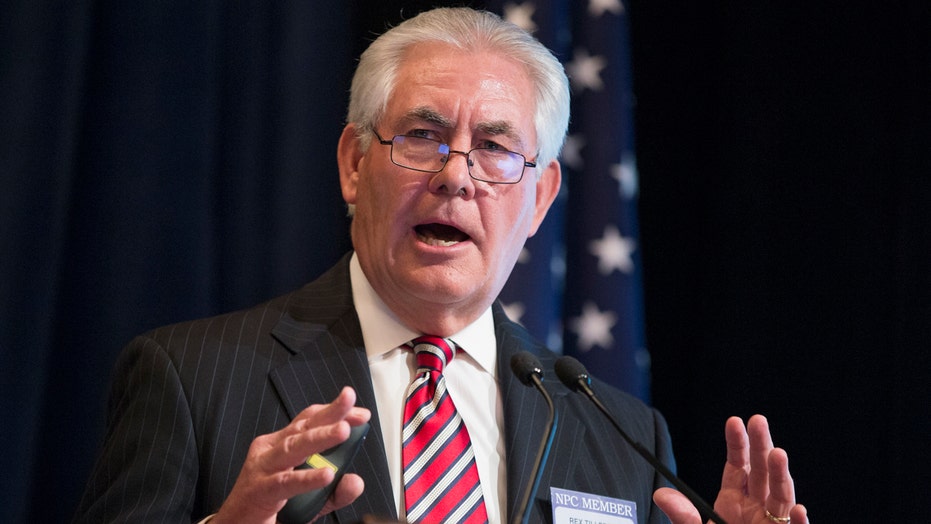 President-elect Donald Trump’s expected pick of ExxonMobil CEO Rex Tillerson for secretary of state would mark the latest blow for Democrats and environmentalists trying to turn the energy giant into a pariah over its alleged role hiding the threat of global warming.

Democratic attorneys general have pursued a high-profile, multi-state probe into ExxonMobil that has sputtered in recent months.

With transition sources saying Trump plans to nominate Tillerson to lead his State Department, environmentalists are condemning the selection. May Boeve, executive director of 350.org, called Tillerson an “unfathomable” pick.

“We can’t let Trump put the world’s largest oil company in charge of our international climate policy,” Boeve said in a statement. “Tillerson may be a friend of Putin’s, but he’s no friend of the planet. ExxonMobil is still a leading funder of climate denial and is pursuing a business plan that will destroy our future. Tillerson deserves a federal investigation, not federal office.”

Tillerson's selection as top American diplomat also would mark another notch for the company over the Democratic attorneys general, led by New York’s Eric Schneiderman, who have accused ExxonMobil of misleading investors by downplaying the risks of climate change.

Schneiderman subpoenaed the company for documents related to the probe in November 2015, with Massachusetts' and the Virgin Islands' attorneys general announcing similar investigations in March.

Yet the movement has been hit by a number of setbacks, as Exxon fights back and puts the AGs on the defensive.

In June, Virgin Islands Attorney General Claude Walker dropped his subpoena on the condition Exxon agreed to drop a related lawsuit, shortly after Walker withdrew a connected subpoena against the Competitive Enterprise Institute – a libertarian think tank – for climate documents relating to the probe.

Also in June, Exxon sued Massachusetts Attorney General Maura Healey in a Texas federal court, later adding Schneiderman to the lawsuit in November, claiming the probes were conducted for political reasons and in bad faith.

In its lawsuit against Healey in June, ExxonMobil said the attorney general’s probe was “a pretextual use of law enforcement power to deter ExxonMobil from participating in ongoing public deliberations about climate change.”

“Attorney General Healey is abusing the power of government to silence a speaker she disfavors,” the lawsuit said.

Since the lawsuit, Schneiderman has shifted his position somewhat, saying in a Aug. 19 interview with The New York Times that the probe is to focus less on what ExxonMobil knew in the past, and more on what it has been predicting more recently about its assets, namely the value of its oil reserves.

Schneiderman said Exxon’s claims in 2014 that it would not have to leave oil reserves in the ground as “stranded assets” as part of a global effort to end climate change may be false, meaning that the company could be overvaluing its assets and could point to securities fraud.

“If, collectively, the fossil fuel companies are overstating their assets by trillions of dollars, that’s a big deal,” Schneiderman told the Times.

Should Tillerson be nominated, and confirmed, the anti-Exxon attorneys general could be heading for a showdown with the new secretary of state. In the August interview with the Times, Schneiderman pointed to comments Tillerson made in 2010 testimony in which he said it's not yet clear to what extent humans affected the climate “and therefore what can you do about it.”

Schneiderman’s office declined to comment on the reported Tillerson pick, but had strong words about Exxon’s pushback.

“Exxon will do everything it can to distract, delay, and deflect the NY AG’s investigation. Exxon’s unprecedented litigation in Texas represents nothing more than a blatant attempt to avoid accountability under New York law in New York courts where—just the other day, in open court—Exxon again acknowledged the legitimacy of our investigation and agreed to comply with the Attorney General’s subpoenas,” a spokeswoman for the AG told FoxNews.com.

Schneiderman and Healey were handed a victory Monday when a federal court judge canceled a scheduled deposition of Healey by ExxonMobil lawyers. The judge had initially ruled that Healy would have to appear for a deposition in Texas on Tuesday.

“We are pleased that the federal judge has canceled this unprecedented deposition order. Our office has argued strongly that the Texas court has no jurisdiction over our investigation and we will continue to urge it to dismiss Exxon’s lawsuit against us,” Chloe Gotsis, deputy press secretary at Healy’s office, told FoxNews.com.