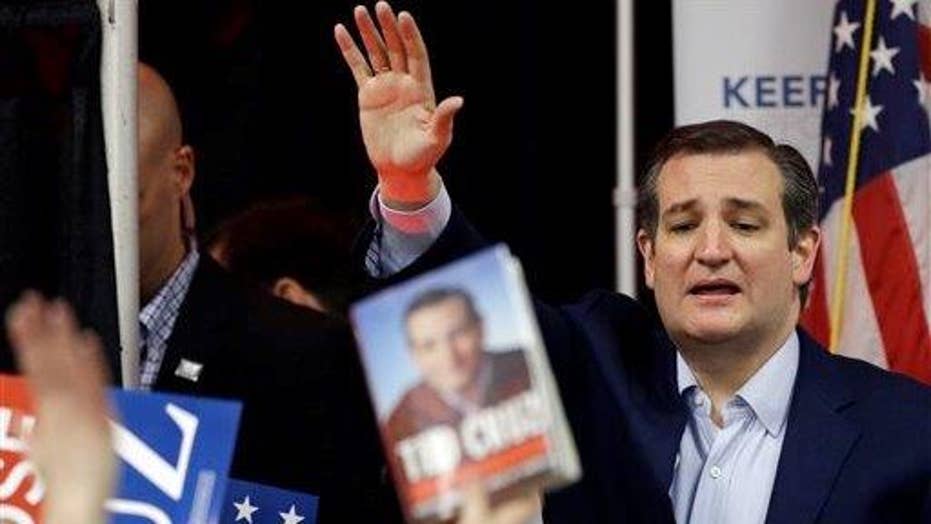 That no doubt pleases Sen. Ted Cruz, R-Texas, who is riding a lead of almost 7 points in the Real Clear Politics average of polls for Tuesday’s Badger State contest. But as South Carolina Republicans proved in 2012 when they broke for Newt Gingrich, such streaks aren’t usually causal.

Every GOP nominee of the past 52 years has won Wisconsin (and the streak might go back 64 years if it hadn’t been for favorite son Rep. John Byrnes in 1964) because they looked inevitable when they got to Wisconsin, not because Wisconsin made them that way. There is no magic wheel of cheese in Wauwatosa that holds the Republican Excalibur.

In fact, late primary states usually fall to the eventual nominee because the contests are usually substantially over.

Party unity is particularly valuable in Wisconsin where the GOP was founded and where party loyalty and order are prized, but there is a premium on unity in every late-voting state. Even if the frontrunner isn’t your brand of brew, his argument that it’s time to close ranks and focus on the general election makes for a powerful message.

And by April, when most of the delegates have already been awarded, it gets harder for trailing candidates to get their voters to the polls. Rick Santorum grabbed a third of the vote in Wisconsin four years ago, but came up short and officially ended his campaign one week later. Santorum’s bid had been broken by his defeat in Illinois two weeks prior, and everybody knew it. As John Kerry might have said, “How do you ask a Republican to be the last one to vote for a lost cause?”

Those two forces – the high premium on unity and the demoralization of other candidates’ supporters – usually create powerful electoral currents. A candidate wins because he is inevitable; a candidate is inevitable because he wins. But this year, neither of those forces is intact as the race rolls into Wisconsin.

The frontrunner, Donald Trump, looks like a losing bet for the general election. He certainly can argue, as he did to the WaPo, that he will change the course of the contest before November, but right now the electoral roadmap looks like 31 weeks of bad road. Even Trump’s designated surrogates acknowledge some, er, deficiencies.

And neither can Trump rely on the despair of his rivals’ supporters. As Cruz demonstrated in Sunday’s Republican convention in North Dakota, his strength with party stalwarts gives him a stronger-than-usual claim to viability. And in states like Louisiana, Tennessee and now Arizona, the Texan’s superior organization continues to deprive Trump of much-needed delegates.

No one is more likely to be the Republican nominee than Trump, but his chances look worse, not better, than a month ago.

Money, the other major factor that usually shuts down contests at this point, isn’t a factor either. Trump doesn’t spend much and Cruz has more than enough to take this sucker all the way to Cleveland.

Denied of the chance to play their usual ratifying role, how will Wisconsin Republicans respond? And if they, in fact, choose Cruz what would it mean?

Despite the kvetching of many, the (reputable) polling this cycle has been pretty spot on. There’s no reason to believe that Cruz isn’t really ahead in Wisconsin. What’s in doubt is whether he can win by a large enough margin to turn a primary hat trick: get the momentum from a first-place finish, win an outright majority to get his sixth of eight majority wins needed to have his name entered into nomination and to win in all eight congressional districts to make the state truly winner-take-all.

For Cruz, if the polling proves correct, he would come up short of an outright majority and also probably lose at least a few delegates on the district level to Wisconsin spoiler, Ohio Gov. John Kasich. None of that particularly helps Trump since he is playing a zero sum-game: every delegate that either Cruz or Kasich wins increases Trump’s deficit.

What seems to be at stake is whether the nominating process just turns against Trump or really shifts towards Cruz. Polls suggest the national frontrunner will fall short Tuesday, and that will reinforce Trump’s mounting troubles, whatever the margins. But if Cruz wins with an overhead smash, the race will be reset if not in his favor, at least in a way that reinforces his status as the man to beat Trump.

WITH YOUR SECOND CUP OF COFFEE…
As candidates on both sides gear up for a contentious primary in Wisconsin on Tuesday, many in the Badger State are also gearing up…for the return of fishing season and the traditional Friday Night Fish Fry. Travel Wisconsin has the story: “When Catholic immigrants such as the many Irish, Polish, and Germans, settled in Wisconsin, this practice came with them. During Prohibition, taverns – which could no longer sell the products that kept them in business, turned to serving food to keep the doors open (and perhaps sneak a few pints under the table). Fish was abundant and cheap, and frying didn’t exactly require cooking school.”

DEMS HAVE THEIR CLAWS OUT IN THE BADGER STATE
Who would have thought the Democratic primary would still be simmering? Certainly not presumptive nominee Hillary Clinton, who is facing a possible loss in Tuesday’s Wisconsin primary.

Clinton had a strong lead in the state until recently when she fell 2 points behind Sen. Bernie Sanders in the Real Clear Politics average for Wisconsin. As evidenced in other contests, Sanders does well in young college towns, and the scent of patchouli hangs heavy in many precincts of Madison, but that doesn’t mean he’s got it in the bag.

With Sanders’ growing margin in the polls, Clinton might be having flashbacks to 2008 when she actually did lose the Badger State to then-Sen. Barack Obama by 18 points. So far though, this cycle’s primary doesn’t seem like a landslide for her opponent at all. Indeed, it will actually be more like a nail biter.

In 2008, Wisconsin voted in February when Clinton was mounting a comeback after early losses and dealt her campaign a stinging rebuke. In April 2016, however, Sanders’ severe delegate deficit might motive those Democrats on the fence towards a safe bet with Clinton.

If Clinton can deliver a comeback this cycle, it will be a sturdy nail in Sanders’ coffin. But if Sanders can pull out the win like the one he nabbed in neighboring Michigan, the Democratic contest will roll on and on and on…

[RCP breaks down how delegate math and momentum might decide voters’ preference in Wisconsin.]

Hillary says ‘unborn person’ doesn’t have rights - Weekly Standard: “On Sunday, Hillary Clinton told Chuck Todd that no unborn child has constitutional rights. ‘The unborn person doesn’t have constitutional rights,’ under our current laws, said Clinton. She also said that ‘the woman’s right to make decisions’ is most important when it comes to abortion. Most notable perhaps is Clinton’s use of ‘person.’ Oftentimes, when talking about a woman’s right to choose, pro-choicers will use terminology that suggests the unborn is not a person or human, but a ‘fetus.’”

Hillary, Bernie can’t agree on NY debate - WSJ: “Democratic presidential candidates Hillary Clinton and Bernie Sanders sounded hopeful that they could break an impasse and hold a debate before the New York primary on April 19, though their campaigns made clear Sunday that sticking points remain unresolved. ‘I want it. Look, I’m confident that there will be’ a debate, Mrs. Clinton said on NBC. But as the day wore on, a standoff continued. The Sanders campaign said Sunday afternoon that it had accepted an invitation to take part in a prime-time debate next Sunday on NBC. However, the Clinton campaign hasn’t agreed to show up.”

POWER PLAY: HOW TO DEFEAT THE REPUBLICANS
With a Donald Trump nomination the opposition research pretty much writes itself, but the Democrats are still getting their information together to defeat the Republicans this fall. President of the Democratic PAC American Bridge, Jessica Mackler, joins Chris Stirewalt to discuss the different tactics her group might use against a Trump verses another Republican nominee. WATCH HERE.

HE’S HER KING CRAB AND SHE’S HIS QUEEN
NBC Connecticut: “Police in Connecticut arrested two people after an argument at Royal Buffet got out of hand Saturday night. Manchester police say they were called to 410 West Middle Turnpike for a dispute that started verbally over crab legs at the buffet table and escalated into a physical confrontation. During the scuffle, a 21-year-old man was punched in the face and lost a tooth. That man’s mother jumped in and deployed pepper spray at her son’s attackers. Her actions were in self-defense and she is not facing any charges, according to police. Police arrested two people, identified as Clifford Knight, 45, and Latoya Knight, 38, both of Windsor…Police say the suspects are husband and wife.”