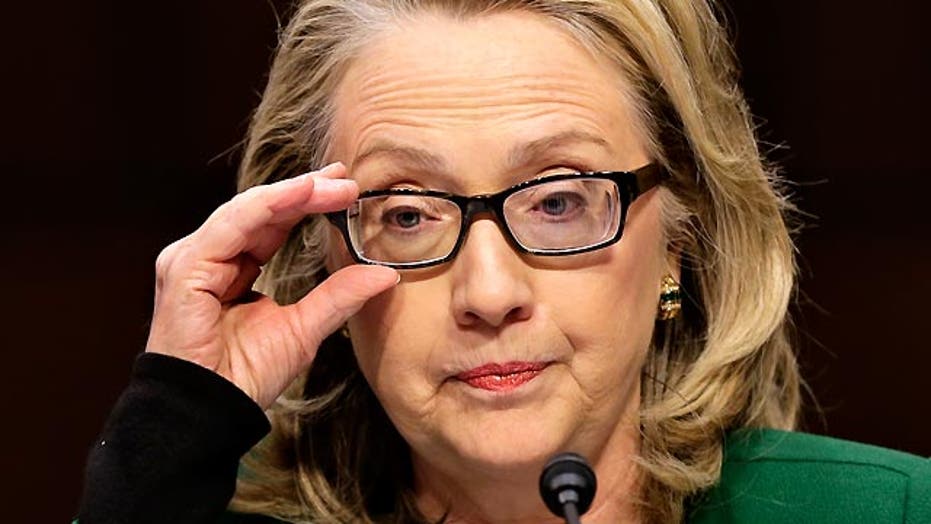 The account from Raymond Maxwell, former head of the Bureau of Near Eastern Affairs (NEA), was first published in The Daily Signal. Rep. Jason Chaffetz, R-Utah, confirmed to FoxNews.com on Monday that Maxwell told him and other lawmakers the same story when they privately interviewed him last year about the attacks and their aftermath.

Chaffetz said that Maxwell claimed Clinton's chief of staff and deputy chief of staff were overseeing the document operation, which allegedly took place on a weekend in a basement office of the State Department.

"What they were looking for is anything that made them look bad. That's the way it was described to us," Chaffetz said.

According to Chaffetz' account of his interview with Maxwell, as well as the Daily Signal report by Sharyl Attkisson, Maxwell said those scrubbing the documents were looking for information that would cast Clinton and senior leaders in a "bad light."

Chaffetz said such documents were said to be removed, so that Congress and the Accountability Review Board -- the board probing security lapses as well as the attack's aftermath -- would not see them.

Chaffetz described Maxwell's account as "consistent" all this time. The congressman said he is speaking publicly about Maxwell's allegations because Maxwell himself has gone public with them.

State Department spokesman Alec Gerlach denied the allegations in a statement to FoxNews.com.

"That allegation is totally without merit. It doesn't remotely reflect the way the ARB actually obtained information," he said in an email. He explained that an "all-points bulletin"-type request went out department-wide instructing "full and prompt cooperation" for anyone contacted by the ARB, and urging anyone with "relevant information" to contact the board.

"So individuals with information were reaching out proactively to the Board. And, the ARB was also directly engaged with individuals and the Department's bureaus and offices to request information and pull on whichever threads it chose to. The range of sources that the ARB's investigation drew on would have made it impossible for anyone outside of the ARB to control its access to information," Gerlach said. He further noted that the leaders of the ARB have claimed they had unfettered access to information and people.

Maxwell was one of four State Department officials disciplined in the wake of the 2012 Benghazi attack, in which four Americans were killed. He was put on administrative leave, and has spoken out before about how he felt he was scapegoated.

According to The Daily Signal report, Maxwell walked in on the weekend session on a Sunday afternoon after hearing about it. He reportedly claims he saw stacks of documents when he arrived as well as an office director who worked for him -- but who hadn't told him about the assignment.

Maxwell reportedly claimed she told him they were instructed to go through the stacks and pull out items that could put anybody in the NEA "front office" or seventh floor -- where the secretary's office is -- in a "bad light."

Maxwell said he "didn't feel good about it" and left a short time later.

Chaffetz said that he was told then-Clinton Chief of Staff Cheryl Mills and Deputy Chief of Staff Jake Sullivan were there and overseeing the operation.

"For Hillary Clinton's personal chief of staff and deputy chief of staff to be making a concerted effort to hide documents, make sure that the Accountability Review Board and Congress did not see those documents is unbelievable and absolutely wrong," Chaffetz said.

Requests for comment to representatives for Clinton, Sullivan and Mills have not yet been returned.

The new allegations have surfaced as the House select committee on Benghazi prepares to hold its first open hearing on Wednesday.

Scheduled to testify are Greg Starr, the department's assistant secretary for Diplomatic Security, and Mark Sullivan and Todd Keil, members of the Independent Panel on Best Practices, created to review the accountability board's efforts.

The board was led by former Ambassador Thomas Pickering and Adm. Michael Mullen, who have already testified before Congress and are expected to be called before the select committee.

Maxwell told Attkisson that the ARB probe was "at best, a shoddily executed attempt at damage control."