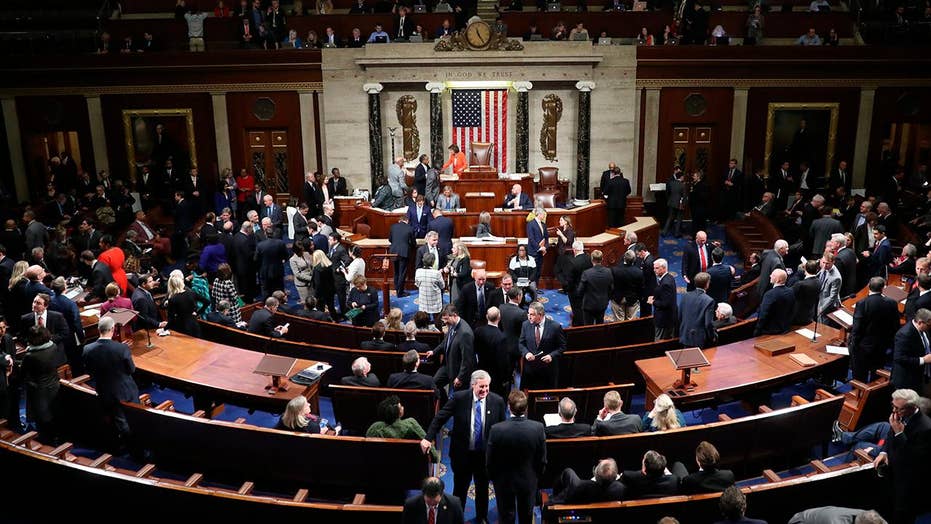 Former U.S. envoy to Ukraine Kurt Volker, according to transcripts released Tuesday, pushed back on the claim that President Trump sought to withhold a meeting with Ukrainian President Volodymyr Zelensky until Kiev committed to investigate allegations concerning the 2016 election -- while also denying that Trump was seeking “dirt” on former Vice President Joe Biden.

The deposition transcripts, though, also reflect officials' concerns about the involvement of Trump attorney Rudy Giuliani in seeking politically related investigations out of Ukraine. Further, they offer varying accounts of whether a quid pro quo of some kind -- involving either a meeting or the release of U.S. military aid -- may have been presented.

One of the most significant revelations from Tuesday's release is that E.U. Ambassador Gordon Sondland revised his prior testimony to say that he told a top Ukrainian official that U.S. aid would likely not resume until the country issues a corruption statement -- a revelation that was quickly hailed by Democrats of proof of the quid pro quo they have been alleging took place.

Other sections presented a muddier picture. In the transcript of his closed-door deposition last month with lawmakers conducting the impeachment probe, Volker was asked if Trump withheld or delayed a meeting with Zelensky absent a pledge to probe concerns Ukraine had interfered in the 2016 U.S. presidential election.

“The answer to the question is no, if you want a yes-or-no answer. But the reason the answer is no is we did have difficulty scheduling a meeting, but there was no linkage like that,” he said.

Recently revealed text messages showed Volker appearing to link the investigations to a D.C. visit by Zelensky. The deposition transcript seems to reflect Volker asserting the contrary. Sondland, too, testifying about a conversation he had with White House Acting Chief of Staff Mick Mulvaney, said he didn't tell him the investigations were needed in order for there to be a White House visit. 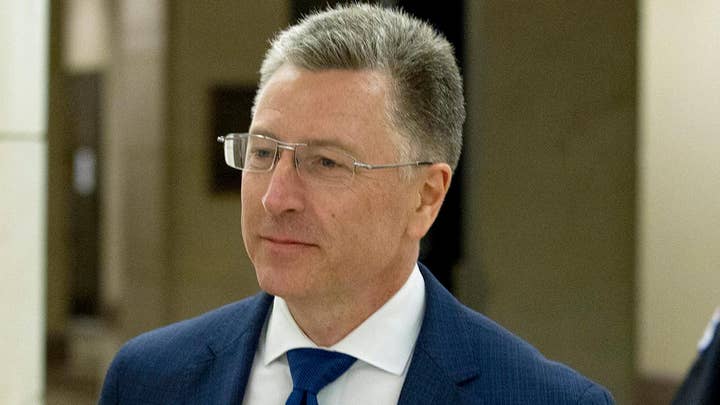 "That was never linked," he said. "That was only specifically brought into the press statement for a brief period of time through Mr. Giuliani when we were negotiating a press statement."

At another point in the transcript, though, Sondland said he eventually thought "there might be a link between the White House visit and aid to the Ukraine that was being held up."

House Democrats established the impeachment inquiry to investigate the circumstances surrounding President Trump’s July 25 call with Zelensky, in which he urged him to “look into” allegations surrounding the 2016 election and the Biden family’s activities in the country. Democrats have alleged that a quid pro quo took place, with Trump leveraging military aid until the Ukrainians investigated the claims. Trump and Zelensky have claimed that no pressure was placed on them, but statements from certain officials have challenged that narrative.

While the White House released the transcript of the call, and a House committee released the original complaint by the whistleblower that sparked the process, much of the inquiry is now focusing on what officials understood to be the president’s intent at the time. While military aid was initially locked, it was eventually unblocked by Congress.

Acting U.S. Ambassador to Ukraine Bill Taylor recently testified that he understood the White House was willing to hold up both military aid and a prospective White House meeting to extract a public announcement from the country that probes were underway.

“By mid-July it was becoming clear to me that the meeting President Zelensky wanted was conditioned on the investigations of Burisma and alleged Ukrainian interference in the 2016 U.S. elections,” Taylor testified, referring to Burisma Holdings -- a Ukrainian energy firm where Joe Biden’s son Hunter sat on the board. A transcript of the July call shows Trump sought an investigation concerning Joe Biden’s involvement in seeking the ouster of a prosecutor looking into that firm. 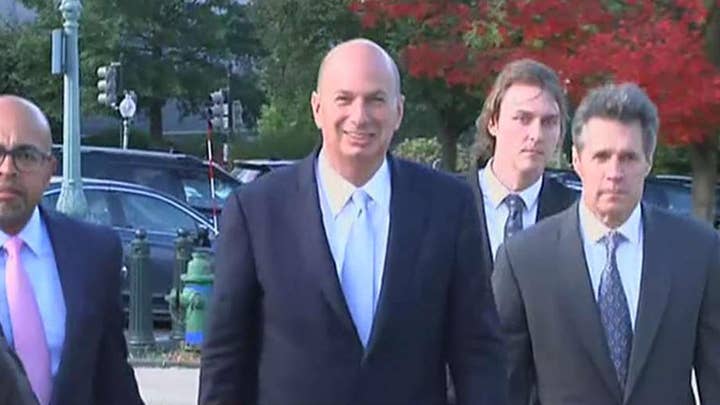 Yet while Sondland had texted Taylor in September saying there was no quid pro quo, the transcripts released Tuesday of his deposition include a supplemental declaration, in which he says that “by the beginning of September 2019, and in the absence of any credible explanation for the suspension of aid, I presumed that the aid suspension had become linked to the proposed anti-corruption statement.”

He also acknowledged telling one of Zelensky’s advisers that “resumption of U.S. aid would likely not occur until Ukraine provided the public anti-corruption statement that we had been discussing for many weeks.”

In a statement released Tuesday afternoon, White House Press Secretary Stephanie Grisham still said the transcripts show less evidence for the "illegitimate impeachment sham than previously thought." She noted that Sondland said he "presumed" there was a link to the aid—"but cannot identify any solid source for that assumption."

In another excerpt from the testimony, Sondland described how the discussions about a statement on corruption in general in Ukraine became more explicitly about Biden-Burisma as a "continuum" amid the involvement of Giuliani, who was pushing the Biden-Burisma agenda.

"It kept—it kept getting more insidious as [the] timeline went on, and back in July, it was all about just corruption," he said.

"He didn’t even -- he wasn’t even specific about what he wanted us to talk to Giuliani about. He just kept saying: 'Talk to Rudy, talk to Rudy,'" he said.

Volker too spoke about Giuliani's involvement, telling lawmakers that "the negative narrative about Ukraine which Mr. Giuliani was furthering was the problem."

Democrats seized on the testimony as proof of a quid pro quo, saying it was a sign that "the president's scheme comes into clearer focus."

“It is clear from their testimony that, in exchange for the statement, President Trump would award the Ukrainian president with a highly coveted White House meeting and, later, with millions of dollars in critical military aid being withheld," the statement from the chairs of the Foreign Affairs, Intelligence and Oversight committees said. "Ambassador Sondland called this changing U.S. policy toward Ukraine a ‘continuum’ that became ever more ‘insidious’ over time."

The statement from Sondland contrasts with his texts with Taylor, who had expressed concern about what he saw as a quid pro quo.

"As I said on the phone, I think it's crazy to withhold security assistance for help with a political campaign," Taylor said in a text exchange in September.

“The President has been crystal clear: no quid pro quo’s of any kind,” Sondland texted back. “The President is trying to evaluate whether Ukraine is truly going to adopt the transparency and reforms that President Zelensky promised during his campaign.”

Sondland, though, explained to the committees that Trump said something similar to him during a phone call, in which he said Trump was in a "bad mood" and nearly hung up on him.

"I want nothing. I want no quid pro quo," Trump said, according to Sondland. "I want Zelensky to do the right thing."

Volker, meanwhile, on the morning of a planned July 25 phone call between Trump and Zelensky, seemed to link a White House visit with the investigations, despite his more recent testimony. He texted a Zelensky aide: "Heard from White House -- Assuming President Z convinces trump he will investigate / ‘get to the bottom of what happened’ in 2016, we will nail down date for visit to Washington."

In his testimony, Volker was also asked if he would say that Trump asked Zelensky to “manufacture dirt on the Bidens.”

“No,” he said. “And I’ve seen that phrase thrown around a lot. And I think there’s a difference between the manufacture or dig up dirt versus finding out did anything happen in the 2016 campaign or did anything happen with Burisma. I think – or even if he's asking them to investigate the Bidens, it is to find out what facts there may be rather than to manufacture something.”

On the question of the hold placed on aid, he said it struck him as "unusual" but that "no reason was ever given as to why that was."

When Volker testified last month, Republicans said his testimony did not comport with what they called “Democrats’ impeachment narrative.”

Meanwhile, two witnesses were scheduled to give depositions on Tuesday, but didn’t show up to the House Intelligence Committee. They are Michael Duffey, an associate director for National Security Programs at the office of Management and Budget, and Wells Griffith, director of international energy and environment at the National Security Council.