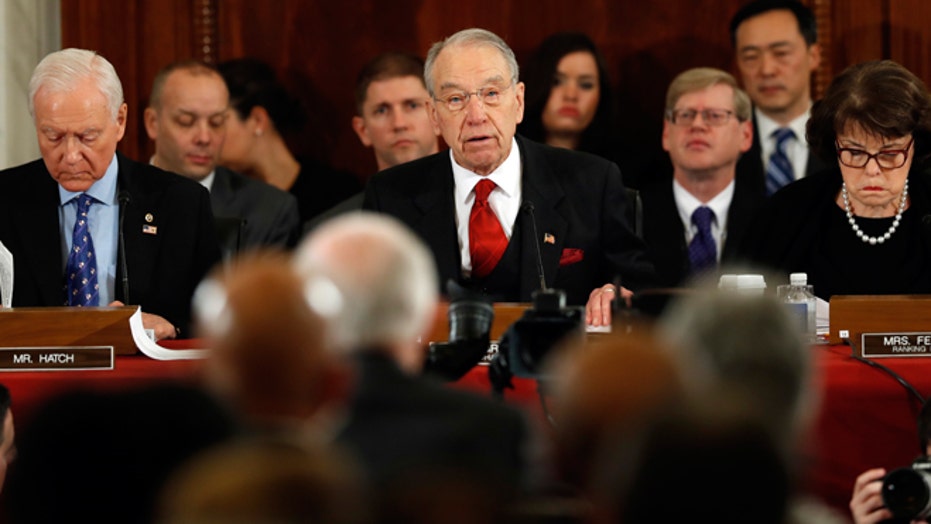 The director of the Office of Government Ethics fueled Democrats’ concerns about Donald Trump’s Cabinet picks over the weekend by accusing Republicans of rushing their hearings. But one conservative group says Walter Shaub was just showing his partisan stripes – and claims his office even “covered for” Hillary Clinton when Congress sought records on her speech income more than a year ago.

America Rising PAC claims Shaub’s office displayed “utter incompetence” when it came to documenting then-Secretary of State Hillary Clinton’s income -- which Shaub, in a House Oversight Committee hearing in December 2015, said the office did not have to disclose.

At the time of the Clinton questions, Republicans complained Clinton had not disclosed compensation for at least five speeches that was then sent to the Clinton Foundation between 2014 and 2015. They pressed the OGE for answers, but Shaub told the House oversight committee the funds were not required to be disclosed.

The Washington Examiner first reported on the PAC’s concerns.

“For as long as I remain Director, OGE’s staff and agency ethics officials will not succumb to pressure to cut corners and ignore conflicts of interest,” Shaub wrote in the letter.

Shaub’s letter outlined concerns regarding the speed of the Senate confirmation hearings schedule, and that several nominees had not completed the ethics review process. Shaub wrote that the announcement of nominees prior to consulting OGE for an evaluation of ethics issues also complicated this “normally intensive process.”

“The Senate and American people deserve to know that these cabinet nominees have a plan to avoid any conflicts of interest, that they’re working on behalf of the American people and not their own bottom line, and that they plan to fully comply with the law,” Schumer said in a statement. “Senate Republicans should heed the advice of this independent office and stop trying to jam through unvetted nominees.”

Some hearings have since been delayed, a development cheered by Schumer.

“I worked with Walter when he was at OGE and I was at the Bush White House,” Richard Painter, former White House Ethics Counsel under President George W. Bush, told FoxNews.com in an email. “He bent over backwards to get things done – he was a strong supporter of our ethics program.”

Painter told Foxnews.com that the attacks on the OGE are “disturbing” and that the motives seem “quite transparent.”

“Director Shaub has served presidents of both parties with distinction – sometimes we agreed and sometimes we disagreed, but he always tries to do the right thing – I say to those smearing him, have they no shame?” Eisen said.