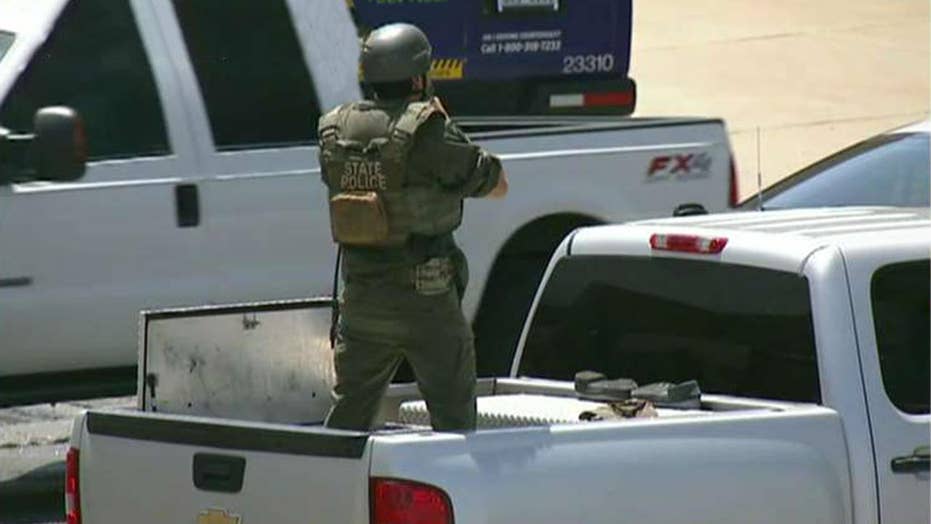 President Trump has been in contact with Attorney General William Barr and the Texas governor; Mark Meredith reports.

President Trump and his potential White House rivals led the political reaction to Saturday's mass shooting at an El Paso, Texas Walmart store, condemning what the president described as "a hateful act."

"Today’s shooting in El Paso, Texas was not only tragic, it was an act of cowardice," Trump wrote on Twitter. "I know that I stand with everyone in this Country to condemn today’s hateful act. There are no reasons or excuses that will ever justify killing innocent people. Melania and I send our heartfelt thoughts and prayers to the great people of Texas."

Vice President Mike Pence said he was "[s]addened by the loss of so many innocent lives in El Paso, TX. Our prayers are with the victims, their families, and the entire community. Grateful for the courageous efforts and swift action by federal law enforcement and local first responders."

The Walmart corporate account tweeted "We're in shock over the tragic events at Cielo Vista Mall in El Paso, where store 2201 & club 6502 are located. We’re praying for the victims, the community & our associates, as well as the first responders. We’re working closely with law enforcement & will update as appropriate."

Attorney General William Barr released a statement saying, “The Justice Department joins in mourning with the people of El Paso, Texas. Those who commit such atrocities should be held accountable swiftly and to the fullest extent the law allows.”

El Paso Mayor Dee Margo also tweeted his sympathies for his city on behalf of himself and his wife, Adair.

"Adair and I are devastated by the tragic events unfolding in our City. Our hearts go out to the victims and gratitude to our first responders. We will continue to keep you updated," he said on Twitter, attaching a more lengthy statement with details about the unfolding situation referring to the shooting as a "senseless act of violence" and saying "My condolences and prayers go out to all of El Paso as we mourn those impacted by this tragedy."

Rep. Veronica Escobar, D-Texas, who represents El Paso, released a statement saying, "Today, El Paso is facing indescribable pain and horror that too many other American communities have had to endure. Our hearts are completely broken by this needless loss of life, especially here in our beautiful home. We mourn for the victims and everyone involved."

Escobar also thanked first responders and law enforcement adding "I am imploring that we come together, and once and for all address the gun violence epidemic that plagues our nation."

"Heidi & I are praying for everyone in El Paso," Sen. Ted Cruz, R-Texas, tweeted. "As events continue to unfold, please heed any warnings from local authorities and law enforcement and stay safe." Cruz added the hashtagged statement "Pray4ElPaso."

"Our hearts go out to the families of those killed and injured in El Paso today," tweeted Sen. John Cornyn, R-Texas. "We stand with all El Pasoans in the face of this senseless violence and thank the brave @eppolice officers & first responders. I stand ready to help @ElPasoTXGov and @Mayor_Margo any way I can."

"Stay safe, El Paso," his message continued. "Please follow all directions of emergency personnel as we continue to get more updates."

Similarly, 2020 candidate Pete Buttigieg, mayor of South Bend, Ind., wrote, "My grandmother used to take me to Cielo Vista Mall. Now it's one more mass shooting scene. How many more must grieve before we act? #ElPaso."

She went on to point fingers at Trump saying “The individuals who do the shootings are responsible but I do think Trump's rhetoric has fueled more hate in this country.”

“The individuals who do the shootings are responsible but I do think Trump's rhetoric has fueled more hate in this country.”

"The tragedy of all these situations is we hear the stories we feel so deeply with the families and the communities and that has to change. This is the issue the American people overwhelmingly support action on," 2020 candidate Rep. John Delaney, D-Md., said at a presser, pushing for universal background checks.

"Today’s horrific mass shooting in El Paso breaks the hearts of all Americans," House Speaker Nancy Pelosi said in a statement. "Our prayers are with the friends and families of the victims and the entire El Paso community which has been devastated by this brutal act of terror and murder.  We are grateful for the courage and heroism of our brave first responders who kept people safe and cared for those in need, and whose swift action brought the suspects into custody and prevented further harm.

“Too many families in too many communities have been forced to endure the daily horror of gun violence," Pelosi went on.  Enough is enough.  The Republican Senate’s continued inaction dishonors our solemn duty to protect innocent men, women and children and end this epidemic once and for all."

New York Gov. Andrew Cuomo said "How many more tragedies, how many more families will be destroyed, how many more children will grow up without their parents before Washington acts? NY's heart breaks for the victims of the horrific shooting in El Paso. But our thoughts and prayers will not stop this madness."

The New York Police Department's Counterterrorism unit said that they "deployed additional Counterterrorism Units to shopping areas out of an abundance of caution," adding that there is no immediate threat to New Yorkers.

Police responded to reports of an active shooting at the Cielo Vista Mall area shortly before 11 a.m. and asked people to stay clear of the active scene. An El Paso police spokesman told reporters shortly before 1 p.m. that there was no longer an "imminent threat" to the area.

The Texas mass shooting was the second in less than one week, following the Gilroy food festival in Northern California where a gunman opened fire, killing three people.