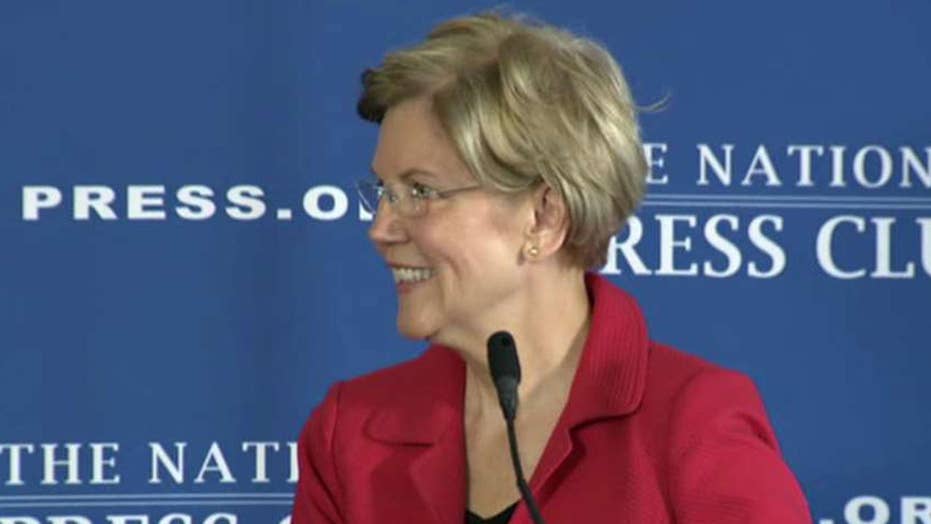 U.S. Sen. Elizabeth Warren, D-Mass, drew criticism Tuesday after sharing a clip of Supreme Court nominee Brett Kavanaugh discussing his days at Georgetown Preparatory School. The editing of the clip seemed designed to fuel the fire over the sexual misconduct allegations against the judge.

In the short video posted on Warren's Twitter page, Kavanaugh is heard speaking at Columbus Law School at the Catholic University of America in 2015 about his school years.

“But fortunately we had a good saying that we’ve held firm to, to this day,” Kavanaugh says in the video. “As the dean was reminding me before the talk, which is ‘What happens at Georgetown Prep, stays at Georgetown Prep.’ That’s been a good thing for all of us, I think.”

Warren quickly jumped to denounce Kavanaugh’s comments, which were revealed in the wake of the allegations of sexual misconduct raised by Christine Blasey Ford, who claims the high court nominee drunkenly forced himself on her during a house party nearly four decades ago.

“I can't imagine any parent accepting this view,” Warren tweeted. “Is this really what America wants in its next Supreme Court Justice?”

But the clip shared by Warren, though first unearthed by MSNBC, cuts out Kavanaugh’s previous remarks indicating he’s talking about his three friends.

“I, by coincidence, three classmates of mine at Georgetown Prep were graduates of this law school in 1990 and are really really good friends of mine,” Kavanaugh said in a recording of the full speech, naming his friends.

Mark Hemingway, a writer for the conservative Weekly Standard, slammed Warren for trying to suggest Kavanaugh was admitting improper behavior in the video rather than making a joke.

“This has zero bearing on whether Kavanaugh sexually assaulted Ford, and the party of underage abortion and birth control on demand suddenly becoming neopuritans is a tad pathetic,” he tweeted.

“Like MSNBC, Sen. Warren is passing around a truncated version of the Kavanaugh video, in which he makes a joke about three ‘really, really good friends of mine,’ in order to smear him,” Oklahoma attorney Gabriel Malor tweeted.

“As we know, Warren is very comfortable misleading people. Her constituents deserve better,” he added, comparing Warren’s clip to a video posted by U.S. Sen. Kamala Harris, D-Calif., which recently came under fire for depicting Kavanaugh as anti-women.

Harris, a member of the Senate Judiciary Committee -- which will decide if Kavanaugh gets a lifetime appointment to the nation's highest court -- tweeted out the clip earlier this month, which shows Kavanaugh mentioning the term “abortion-inducing drugs,” a term that Harris slammed as “a dog whistle for going after birth control.”

But the fact-checkers didn’t find Harris’ commentary or the edited video even remotely accurate. The Washington Post gave the senator four Pinocchios, its most egregious rating, saying the post omitted crucial facts such as that Kavanaugh was actually quoting the terminology used by the plaintiff in a 2013 court case rather than stating his personal views.

Even more partisan fact-checkers such like PolitiFact also found Harris’ attack wasn’t based on truth.

“In Harris’ tweet, Kavanaugh appears to define contraception as abortion-inducing. But the video failed to include a crucial qualifier: ‘They said.’ In fact, he was citing the definition of the religious group Priests for Life. He has not expressed his personal view,” PolitiFact’s check said.