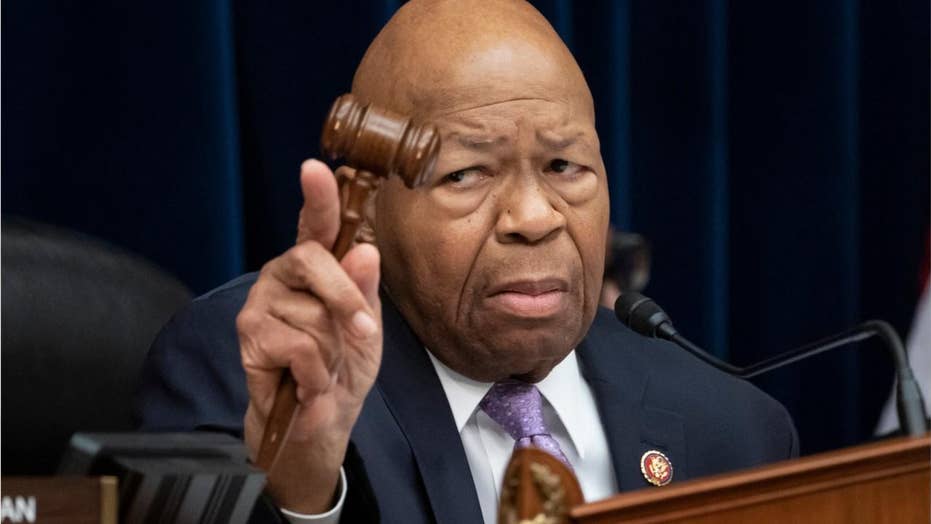 As news spread that powerful House Democrat Elijah Cummings, D-Md., died early Thursday, tributes from colleagues, admirers and critics poured in, expressing shock and sadness that the 68-year-old champion of Baltimore was gone.

President Trump tweeted. "My warmest condolences to the family and many friends of Congressman Elijah Cummings. I got to see first hand the strength, passion and wisdom of this highly respected political leader. His work and voice on so many fronts will be very hard, if not impossible, to replace!"

Senate Minority Leader Chuck Schumer, D-N.Y., speaking on the MSNBC program, "Morning Joe," praised Cummings as "an amazing man. He was not just a great congressman; he was a great man."


Former President Barack Obama and former first lady Michelle Obama said they were "heartbroken over the passing" of Cummings. The nation's 44th president said Cummings work as chairman of the powerful House Oversight Committee and "showed us all not only the importance of checks and balances within our democracy, but also the necessity of good people stewarding it."

Obama also called Cummings "steely yet compassionate, principled yet open to new perspectives" and "steadfast in his pursuit of truth, justice, and reconciliation."

Hillary Clinton tweeted that "America lost a giant with the passing of Rep. Elijah Cummings, a man of principle who championed truth, justice and kindness. He fiercely loved his country and the people he served."

"Elijah Cummings was a man of principle, patriotism and conviction, whose loss will be deeply felt throughout the State of Maryland and our country. I will never forget my dear friend."

Former Vice President Joe Biden tweeted Cummings "was a true public servant, his life defined by the love of his community and a fierce commitment to ensuring truth wins over power."

Sen. Elizabeth Warren, D-Mass., remembered Cummings fondly on Twitter, writing, "Good people everywhere will miss his rumbling voice, his kind heart, and his deep conviction that every human being has worth."

Former House Oversight Committee Chairman Trey Gowdy tweeted glowingly about Cummings, saying he "was one of the most powerful, beautiful & compelling voices in American politics. The power and the beauty came from his authenticity, his conviction, the sincereity with which he held his beliefs," adding "We rarely agreed on political matters."

Maryland Gov. Larry Hogan released a statement calling Cummings "a fierce advocate for civil rights and for Maryland for more than three decades," adding the congressman "leaves behind an incredible legacy of fighting for Baltimore City and working to improve peoples lives."

"He was a passionate and dedicated public servant whose countless contributions made our state and our country better," the statement said.

In a later tweet, Hogan announced he had ordered Maryland flags to fly at half-staff to honor the life and legacy of Cummings.

In a series of early-morning tweets, Cummings' congressional colleague, Sen. Ben. Cardin, D-Md., said Cummings "guaranteed a voice to so many who would otherwise not have one, and stood as a symbol for the heights one could reach if they paid no mind to obstacles, naysayers and hate."

In another tweet, he remembered his friend, saying, "The death of Chairman Cummings leaves an irreplaceable void in our hearts, in our Maryland and in our Congress."

Former Republican National Committee Chairman Michael Steele said his "heart is saddened at the loss of a colleague and friend. Elijah cared deeply about public service and the importance of 'representing your people.'"

Hakeem Jeffries, chairman of the House Democratic Caucus, said he was deeply saddened by Cummings' passing, adding, "he spoke truth to power, defended the disenfranchised," adding, "Congress has lost a Champion. Heaven has gained an Angel of Justice."

U.S. Rep. Liz Cheney, R-Wyo., said in a statement Cummings' passing "marks a sad day for the members of the United States Congress, the people of Baltimore and the entire nation."

The statement continued: "Elijah’s passion for serving his beloved city was easy to see in everything that he did, and his determination to fight for equality and civil rights will never be forgotten.  He was a friend to all and sought to use his position in Congress to bridge divides, not widen them.

Sen. Kamala Harris, D-Calif., eulogized Cummings as "a fearless leader, a protector of democracy, and a fighter for the people of Maryland. Our world is dimmer without him in it."

Sen. Cory Booker, D-N.J., said Cummings "was a friend, a passionate fighter for justice, and a powerful voice of moral conscience in our government who served his country for decades with dignity and integrity. I'm blessed to have known him."

Former U.S. Rep. Beto O'Rourke remembered Cummings as "one of our best," saying the congressman "always led with love - Elijah Cummings was everything right about America. He is already missed, but his legacy will be with us forever,."

Sen. Amy Klobuchar, D-Minn., tweeted, "We've lost a leader like no other. Elijah Cummings was a lion standing up for his beloved Baltimore & rights and truth." She described the late congressman as being "so kind, including to brand new senators like me a decade ago. His advice was as true as his love for his country."

Stacey Abrams, who lost the Georgia gubernatorial race in 2016, said, "Our nation has lost a mighty fighter for democracy, accountability, equity and justice with the tragic loss of Congressman Elijah Cummings." She praised him for never forgetting his was a borrowed power, which he wielded in defense of the vulnerable and on behalf of the American people."

Former Democratic National Committee Chairman Howard Dean, a former governor of Vermont, tweeted about what he described as "a terrible tragedy."

"Elijah is one of the most honest, thoughtful, decent people I ever met in politics," Dean wrote. "His moral compass was unfailing throughout his life in and out of politics. My deepest thanks to elijah's family for lending him to our country for all these years.

"My condolences to the family of Rep. Elijah Cummings of Maryland who went to be with the Lord early this morning at 68 years of age," Sen. Marco Rubio, R-Fla., wrote. "May God grant his family strength & peace in these diffivult moments & his soul eternal rest."

Rep. Mark Meadows remembered Cummings on Twitter, saying "There was no stronger advocate and no better friend than Elijah Cummings. I am heartbroken for his wonderful family and staff - please pray for them. I will miss him dearly."

House Intelligence Committee Chairman Adam Schiff called Cummings "the heart and soul of our caucus, a dignified leader with a voice that could move mountains," praising him as "our moral and ethical North Star."

He added, "The best way we can honor him is to carry on his tireless work in both Baltimore & Congress."

Quoting Cummings, Reiner said: "When we're dancing with the angels, the question will be asked in 2019, what did we do to make sure we kept our Democracy in tact. Faced with the greatest corruption in US history, we honor him by honoring his words."

Actress Piper Perabo shared her thoughts: "Very sad to learn of the passing of Rep. Elijah Cummings this morning," she wrote. "@RepCummings chaired the powerful House Oversight Committee. His booming voice rins in my ears, from when he demanded decency from the head of Homeland Security, for the treatment of children at the border."

Fox News correspondent Mark Meredith tweeted flags above the White House were ordered to be flown at half-staff in Cummings' memory.

Bishop Talbert Swan, an author and talk show host, wrote: "Saddened to hear of your passing. Thank you for your service to our nation. Rest with the ancestors."

Florida Rep. Debbie Wasserman Schultz mourned the death, saying "When our nation can ill-afford to lose such a kind, principled leader one of my dearest friends and mentors has left us. My heart is broken, as I weep personally and for his family and community." 'She praised Cummings' "unmatched integrity and leadership," saying he leaves "a remarkable legacy."

Scott Dworkin, co-founder and host of the podcast "The Dworkin Report," wrote Cummings was "a true American patriot," calling him a "true American hero who will never be forgotten.

Rep. Joe Kennedy III, D-Mass., said Cummings "refused to be told what he could become or where his dreams might end," adding "His towering presence will be missed but his legacy will live on with us all."

Eric Holder, who served as U.S. attorney general under President Barack Obama, called Cummings "the rarest of politicians - he was a man of substance and of grace; fierce in his determination to protect those without a voice and implacable in his search for the truth. Our nation has lost a truly great public servant."

In a Coalition to Stop Gun Violence tweet, the group called Cumming's passing "incredibly sad news," describing him as not only "an icon for justice and peace," but a voice for the voiceless and a warrior for his city & community."