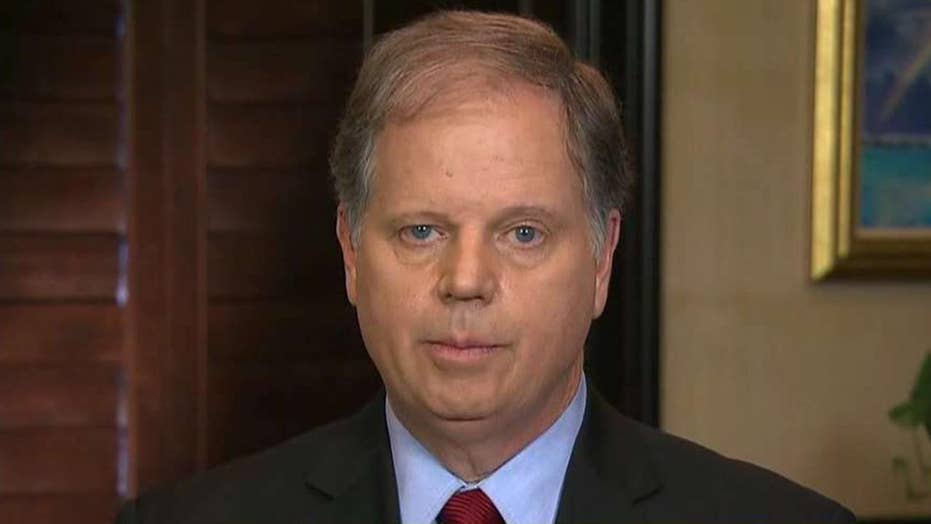 For the first time in more than 20 years, Alabama has a Democratic senator – Doug Jones.

Jones beat out controversial Republican Roy Moore in a special Senate election last month. Jones, a former prosecutor, is the state's first Democrat elected to the U.S. Senate since Richard Shelby in 1992. Shelby, who is still in the Senate, later became a Republican.

Jones was sworn in to the U.S. Senate Wednesday. He is expected to be escorted by former Vice President Joe Biden, a Biden aide confirmed to Fox News.

When asked by Fox News if he had a message for Alabama voters, Jones simply responded, “Thank you.”

What is Doug Jones’ background?

A former U.S. attorney during the Clinton administration, Jones, 63, is perhaps best known for successfully prosecuting two members of the Ku Klux Klan accused of bombing a Birmingham church in 1963 that killed four young girls.

“I may have the honor of serving Alabama as your senator, but the most important thing I have done is prosecuting those klansmen who killed 4 little girls at 16th St Baptist Church,” Jones said in a November tweet ahead of his election.

Because of his resume, Steven Taylor, a political science professor at Alabama’s Troy University, said Jones is considered to be a “quality candidate” in the political science world. He's “someone who is credible and, therefore, competitive,” Taylor told Fox News.

“We’ve not seen a lot of quality Democratic candidates for Senate because Sen. [Richard] Shelby and Sen. Sessions, they were so strongly ensconced in their positions that the Democratic nominee was most often a more fringe candidate and not taken very seriously,” Taylor said. “Jones doesn’t fall in that category – he has a background as a prosecutor, he has linkage to civil rights prosecution for the bombers in Birmingham. This makes him a more serious and significant candidate.”

What about his politics?

He also made it clear during the special election that he is opposed to Republicans’ efforts to repeal former President Barack Obama’s signature health care overhaul. He called those efforts a “nonstarter.”

“There are a lot of people who didn’t vote for me, and I hope they will keep an open mind because I am going to try to be the best senator I can for the state to try to move the state forward as a whole and not just one particular group or philosophy,” Jones said.

"I will be an independent voice and work to find common ground with my colleagues on both sides of the aisle..."

Jones will represent one of the most conservative states in the nation and has already expressed his strong desire to work with both parties while in office. He will be under some pressure to find areas of agreement with Republicans and has hinted that infrastructure improvements could be one such arena.

“I will be an independent voice and work to find common ground with my colleagues on both sides of the aisle to get Washington back on track and fight to make our country a better place for all,” Jones previously said.

Before the Senate seat belonged to now-Attorney General Jeff Sessions – whom Jones is replacing – it belonged to the man Jones considered his mentor, the late Sen. Howell Heflin. Jones worked for Heflin as a staffer after graduating from law school in 1979.

Alabama House Minority Leader Anthony Daniels, a Democrat, praised Jones for being “a fighter for his entire career.” He previously told Fox News that Jones would bring “unity and civility” to the Senate and would work with lawmakers across the aisle to better Alabama.

How did Jones handle the allegations against Roy Moore?

During the campaign, Roy Moore, Jones’ Republican opponent, was accused of having inappropriate sexual relations with minors while Moore was in his 30s. Moore, now 70, adamantly denied allegations of misconduct but did tell Fox News’ Sean Hannity that he “generally” didn’t date women who were teenagers when he was in his 30s and would not date someone without her mother’s permission.

While Jones initially stayed away from the accusations against Moore, the Democratic candidate came out swinging during a speech the week before the election.

“I damn sure believe that I have done my part to ensure that men who hurt little girls should go to jail and not the United States Senate,” Jones said.

Jones received surprising financial backing from a Senate Republican – Jeff Flake. The Arizona senator tweeted a photo of a check made out to Jones with the subject line saying, “Country over Party.”

Flake, who has announced he will not seek re-election in 2018, was openly critical of Moore and called on the Republican candidate to “step aside” from the race.

What has Trump said about Jones?

After Moore won the Republican primary in the special election, President Trump offered his support. But once Moore lost, Trump congratulated Jones and attempted to distance himself from the beleaguered former judge.

“Congratulations to Doug Jones on a hard fought victory. The write-in votes played a very big factor, but a win is a win,” Trump said. “The people of Alabama are great, and the Republicans will have another shot at this seat in a very short period of time. It never ends!”

Fox News’ Guerin Hays and Mike Emanuel contributed to this report, along with The Associated Press.