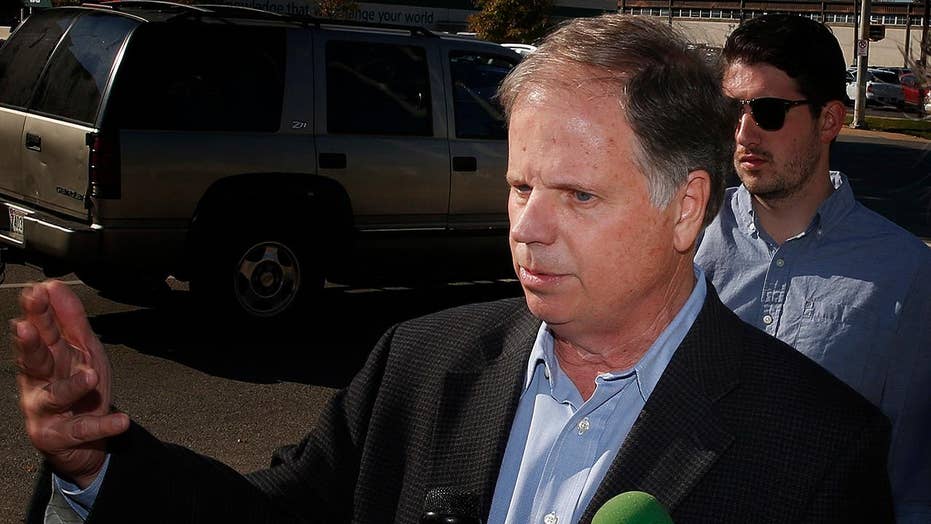 Doug Jones tries to raise his profile amid Moore fallout

The Democratic candidate released a new ad, featuring quotes from prominent GOPers who say they believe the women, as his Republican opponent questions the account of one of his accusers.

BIRMINGHAM, Ala. – A racially charged campaign flyer sent to black residents in Alabama’s Senate race is provoking a social media backlash for Democratic nominee Doug Jones, who is scrambling to mobilize black voters against Republican Roy Moore ahead of Tuesday’s election.

The flyer, which has been circulating on social media and reportedly came from the Jones campaign, shows a young black man with a skeptical look on his face.

“Think if a black man went after high school girls anyone would try to make him a senator?” it reads.

Multiple people who received it have posted photos of the flyer on Twitter, with some condemning it as out of touch and insensitive.

Michael Harriot, a writer for TheRoot.com, an African-American culture website, wrote that “it has upset black voters across Alabama.”

“Someone, probably a white man, thought that the image would resonate with black people and motivate them to get out the vote,” he said.

One Twitter user who apparently received the mailer wrote: “I just got this in the mail. This is *NOT* how do outreach to Black voters! I don’t know who thought this was going to help, but this campaign has engaged Black voters despicably.”

The flyer was meant as a reference to the multiple women going on record to say Moore pursued romantic relationships with them as teenagers when he was in his 30s. He denies the accusations.

The Jones campaign did not immediately return a request for comment from Fox News.