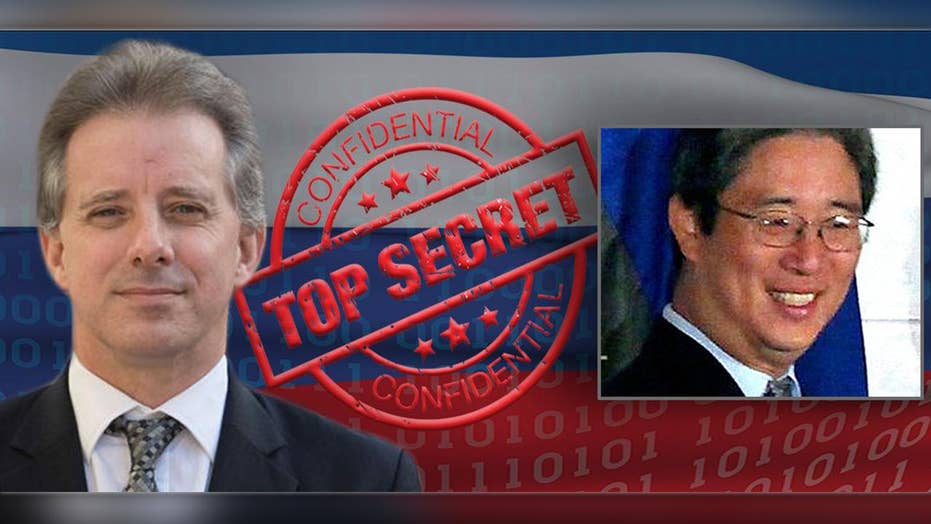 A collection of Justice Department official Bruce Ohr's emails, texts and handwritten notes, reviewed by Fox News, reveals that he was deeply connected to the unverified Steele dossier as well as its author and, during the presidential election campaign, the alleged government surveillance abuses involving a Trump campaign official.

The dossier, which was used by federal officials to justify the surveillance of a top Trump aide, Carter Page, was created by Fusion GPS and paid for by Hillary Clinton's campaign and the Democratic National Committee.

Ohr wrote that Christopher Steele, the ex-British spy who wrote the salacious dossier, was "very concerned (abt) about [former FBI Director James] Comey's firing -- afraid they will be exposed."

The Ohr documents shed more light on Steele's activities before the presidential election. While Steele shopped the dossier to multiple media outlets, he also appeared to ask Ohr for help with a Russian oligarch -- Oleg Deripaska -- after rumors the U.S. might impose sanctions.

Ohr had a conflict of interest during the presidential campaign and transition, congressional investigators say, because his wife  Nellie worked for Fusion GPS. Steele, an ex-British spy, was a key source cited by the FBI and Department of Justice to obtain a FISA (Foreign Intelligence Surveillance Act) warrant to monitor Page.

After the FBI dropped Steele as a source in November 2016 over his contacts with the media, the Republican-led House Intelligence Committee found that Steele had maintained contact with government officials by effectively using Ohr as a back channel.

On Wednesday, White House Press Secretary Sarah Sanders announced that President Trump had terminated former CIA Director John Brennan's security clearance, and was reviewing the clearances of several other former officials. Sanders read a statement from Trump that cited what he described as Brennan's misleading testimony before Congress and his increasingly partisan rhetoric, saying Brennan improperly traded on his access to classified information.

Ohr is the only official on that list still working in the U.S. government.

During closed-door congressional testimony last year, the co-founder of Fusion GPS, Glenn Simpson, claimed he had no contact with Ohr until after the presidential election. But Ohr's work emails conflict with Simpson's testimony, and show contact months earlier.

Ohr's notes also indicate that in December 2016, there was a meeting in Washington, D.C.'s Chinatown between Fusion GPS’ Simpson and Ohr, with Ohr writing, "Glen(n) gave me a memory stick."

Reacting to the news late Thursday, President Trump suggested the disclosures were more proof of a "witch hunt" against him.

The DOJ declined to comment on this story. There was no response from Simpson’s lawyer to a Fox News request seeking comment. Ohr can tell his side of the story on Aug. 28, when a closed-door interview is scheduled with the House oversight and judiciary committees as part of their joint investigation into the FBI and DOJ's conduct during the presidential election.