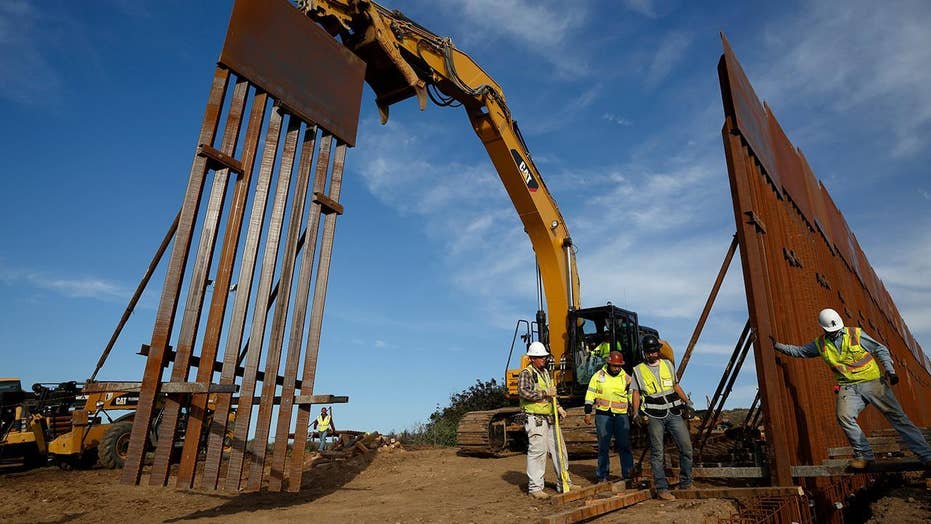 In its budget request for the upcoming fiscal year, the Justice Department said it needs over $72 million to fund the “stronger enforcement of the nation’s immigration laws,” according to materials released Monday, in an aggressive move intended to reduce the nation's backlog of asylum cases dramatically.

As part of his fiscal year 2020 budget plan totaling $4.7 trillion, which was unveiled Monday and faced immediate pushback in Congress, President Trump is also seeking billions more in funding for a border wall and controversial work requirements for Americans collecting a variety of welfare benefits.

The materials noted that the jump would represent a “36 percent increase in [immigration judges] since FY [fiscal year] 2018.”

WHAT ELSE IS IN TRUMP'S BUDGET?

“At the beginning of FY 2019, there were nearly 790,000 cases pending in immigration courts nationwide, a nearly 20 percent increase from October 2017 and by far the largest pending caseload before the agency, marking the 12th consecutive year of increased backlogs,” the materials stated.

In this Dec. 2, 2018 file photo, a Honduran migrant helped a young girl cross to the U.S. side of the border wall, in Tijuana, Mexico. (AP Photo/Ramon Espinosa, File)

“These investments will also improve our ability to conduct immigration hearings to help combat illegal immigration to the United States by expanding capacity, improving efficiency, and removing impediments to the timely administration of justice,” according to the DOJ. “This budget supports the Department’s efforts, along with our partners at the Department of Homeland Security, to fix our immigration system.”

The bar for receiving a favorable determination on an asylum applicant is high, and most applicants do not end up receiving asylum. Citing widespread fraud and abuse of the process, the Trump administration last year rolled back an Obama-era expansion of potential asylum justifications, which extended protections to those alleging domestic abuse or gang-related attacks back home.

The White House has argued that the asylum system is heavily overburdened, and that asylum law never was meant to provide safe haven to everyone suffering unfortunate circumstances in their homelands. The number of asylum seekers has ballooned in recent years, and immigration officials say it's in part because migrants have known they'd be able to live and work in the U.S. while their cases play out.

That process could take years, in part because the immigration court has a backlog of over 700,000 cases.

In a ruling last week, the left-leaning San Francisco-based 9th Circuit Court of Appeals threatened to extend the backlog even further, in a ruling that would provide a constitutional right to asylum applicants to be heard by a federal judge. The ruling, which conflicted with another appellate court opinion, appeared destined for an eventual Supreme Court challenge.

The DOJ also announced it was seeking $290.5 million in program enhancements and transfers to “fight the opioid crisis and support law enforcement safety,” as well as to fight “transnational criminal organizations, known for supplying illicit substances to the United States.”

The department also pushed for $137.9 million to strengthen “federal law enforcement’s ability to reduce violent crime,” including $6 million for the so-called Southwest Border Rural Law Enforcement Violent Crime Reduction Initiative, designed to “assist law enforcement agencies serving rural jurisdictions along or near the Southwest Border to address increases in crime, with a special focus on violent crime, in border communities.”

Additional funds were requested for a variety of law enforcement services, including $4.2 million for the FBI's background check system for firearms purchases and transfers, as well as $5.8 million for more paralegals and support staff for U.S. attorneys offices, which prosecute most federal crimes.

The DOJ request also included another $132 million in program enhancements to address “critical national security and cyber threats,” and $4.3 billion in discretionary and mandatory funding for federal grants to state, local, and tribal law enforcement and victims of crime “to ensure greater safety for law enforcement personnel and the people they serve.”

Included in the counterterrorism budget: $16.6 million, plus 48 positions, in the National Vetting Center (NVC), which would allow the FBI to coordinate with other agencies to vet people “seeking to enter or remain within the United States.”

The NVC, according to the materials, “will increase the government’s ability to identify terrorists, criminals, and other nefarious actors and allow the FBI to provide timely information regarding the risk an individual poses. ... The NVC will strengthen, simplify, and streamline the complex way that intelligence and law enforcement information is used to inform operational decisions and allow departments and agencies to contribute their unique information, all while ensuring compliance with applicable law and policy and maintaining robust privacy, civil rights, and civil liberties protections.”

Should those efforts fail to stop an incoming threat, the DOJ added that it was requesting another $17.1 million and 41 positions in order to help improve the FBI's capability to “access, diagnose, and render safe a chemical, biological, radiological, or nuclear device within the United States and its territories.”