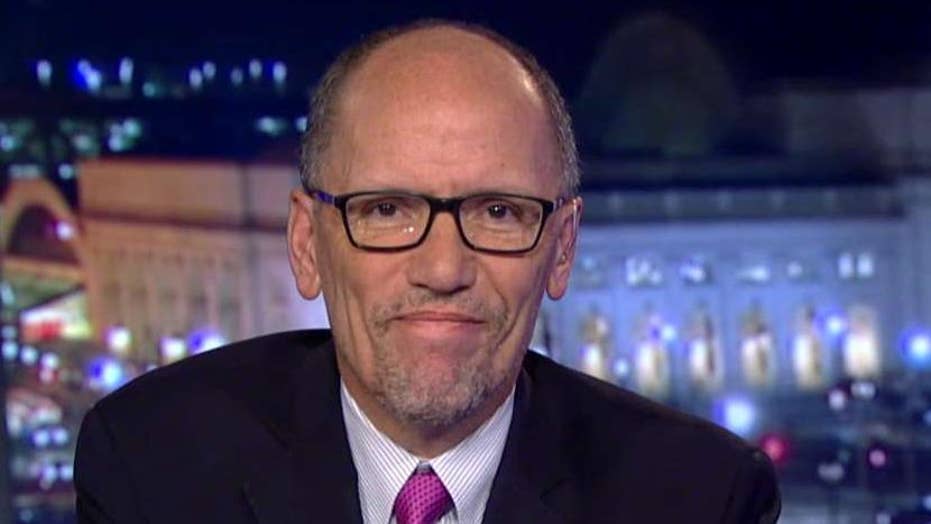 Tom Perez: No debate within the Democratic Party that health care should be a right for all

DNC Chairman Tom Perez on Democratic strategy for the 2020 election.

Democratic National Committee Chairman Tom Perez told Fox News' "Special Report with Bret Baier" on Tuesday that there is "no philosophical debate" in the party that universal health care is necessary, although he conceded there is no consensus on how to achieve that goal.

His comments came one day after California Democratic Sen. Kamala Harris, who has announced her intention to run for president, turned heads at a town hall event by embracing a 'Medicare for All' plan that would eliminate not only the private health insurance industry, but also hospital waiting times.

"There is no philosophical debate about the notion that health care should be a right for all and not a privilege for a few," Perez told host Bret Baier. "The Democratic primary will have a debate about how do we get from 90 percent coverage to 100 percent coverage. There are some who advocate for 'Medicare for All,' there are some who will advocate for a market-based approach."

He added: "We believe that if you have a preexisting condition, you shouldn't lose your health care. We believe we've got to bring down the exorbitant cost of prescription drugs."

Former Starbucks CEO Howard Schultz, a lifelong Democrat who is contemplating an independent bid for the White House, on Tuesday bashed Harris' proposal as unrealistic and un-American. He has similarly characterized self-described Democratic socialist Alexandria Ocasio-Cortez, the freshman New York congresswoman, as “misinformed," and his advisers have cautioned that Democrats risk losing the 2020 election by shifting too far to the left.

Rhode Island Rep. David Cicilline weighs in on the future of health care in America.

"I have respect for Howard Schultz, if he chooses to get in the race, I hope he gets in the Democratic Party," Perez said. "We'll treat him very fairly."

Citing a recent comment by former New York City Mayor Michael Bloomberg, Perez added: "What an Independent run would do in 2020 is simply split the anti-Trump vote and help Donald Trump get re-elected. And Howard Schultz himself said he would only run if there was a real pathway to victory, as opposed to being a spoiler."

But the consternation among Democrats about Schultz's potential bid suggested to some observers that the party is aware that far-left progressive proposals might alienate large swaths of the electorate.

"If 21 months before an election you don’t believe your candidate’s platform is strong enough to win an election with independent candidates, you might want to rethink who you support," billionaire businessman Mark Cuban wrote on Twitter on Tuesday.

Responding to Cuban's comment, Perez told Baier: "I welcome anyone who wants to get in the Democratic primary race for president of the United States. That's why we have built a process that's fair and open and transparent.

"We're going to have double-digit field of candidates in our first debate, in all likelihood, and that's why we've set forth a very, very open process so we'll do it on two nights in a row, if necessary, and we'll draw lots so that it's totally far," Perez continued. "And if it's Howard Shultz, or Michael Bloomberg, or any other one of the potential candidates decides to run, we're going to make sure they have a fair shake."

The DNC faced withering criticism, including from the White House, under the leadership of its former chairwoman, Donna Brazile, after a series of leaked documents showed party leaders apparently favoring the candidacy of Hillary Clinton over Vermont independent Sen. Bernie Sanders. Brazile has since apologized for leaking CNN town hall debate questions to the Clinton team while she was DNC vice chairwoman and a CNN contributor.

Regardless of who wins the nomination, Perez told Baier, the focus will be on health care. A Kaiser Family Foundation poll this month found that while 56 percent of Americans supported 'Medicare for All,' only 37 percent backed the proposal if it might eliminate all private health insurance.

Pressed on those figures, Perez said the party is working to determine how best to expand health care coverage -- and, he added, the party has a strong mandate.

"What Speaker Pelosi correctly said is that health care was on the ballot, and health care won," Perez said, referring to the 2018 midterm elections, in which Democrats gained control of the House.