Howard Schultz on Ocasio-Cortez: There is a problem shes identified but.. she's a bit misinformed

Former Starbucks CEO Howard Schultz, who is seriously considering running a run for president as an Independent, called the billionaire-bashing ideas of Rep. Alexandria Ocasio-Cortez, D-N.Y., “misinformed” and “un-American” at the first stop of his book tour Monday night in New York City.

When asked about how her advisers have said American billionaires are evidence of policy failures and a failure of the system, he replied: “It’s so un-American to think that way.”

He continued about taking advantage of the opportunities in life presented to him: “I am self-made. I came from the projects and took advantage of the promise of the country. I am living proof of the American Dream.”

Just last week, Ocasio-Cortez told a crowd in New York City that “a world that allows for billionaires” is immoral, although she did point out that not all billionaires themselves are immoral, noting the philanthropy of Warren Buffett and Bill Gates.

Schultz on Monday criticized far-left Democrat proposals for single-payer health care and free tuition at public colleges as unrealistic and instead emphasized expanding the economy and curbing entitlements to get the national debt under control.

“If I ran as a Democrat I would have to say things in my heart I do not believe,” he said of the increasingly popular liberal policies: universal health care and a 70 percent marginal tax rate on the wealthy. 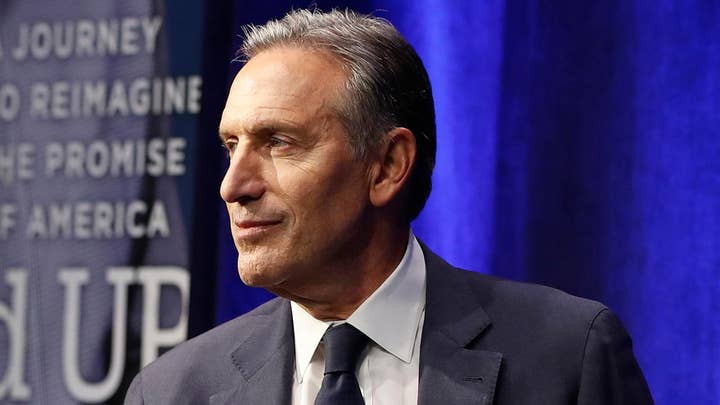 OCASIO-CORTEZ: A WORLD THAT ALLOWS FOR BILLIONAIRES IS IMMORAL

The 65-year-old Seattle billionaire launched a tour Monday in Manhattan to promote his latest book, “From the Ground Up: A Journey to Reimagine the Promise of America.” After New York City, he has stops this week in Tempe, Arizona; Seattle; and San Francisco — but no dates listed for the early voting states of Iowa or New Hampshire.

On paper, Schultz offers a number of qualities that might appeal to voters. He grew up in public housing in New York City’s Brooklyn borough and became the first person in his family to graduate from college.

However, many Democrats have warned Schultz may do little more than play spoiler should he decide to run.

No third-party or independent candidate has won over 5 percent of the popular vote since Ross Perot in 1996. Schultz has argued that a majority of the electorate has been “exhausted” with politics.

President Trump himself weighed in on Monday, tweeting that Schultz “doesn’t have the ‘guts’ to run for President!”