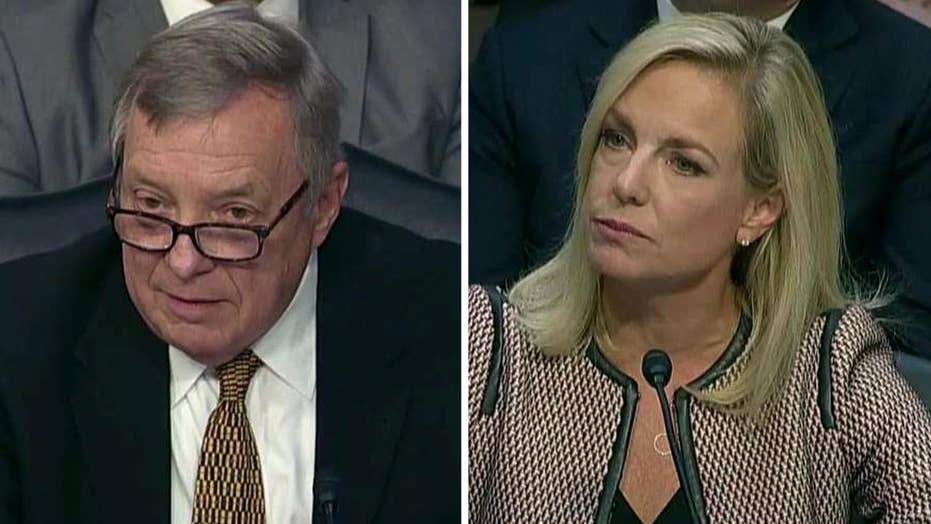 Homeland Security Secretary Kirstjen Nielsen says she remembers 'a lot of rough talk' and 'general profanity' during immigration meeting at the White House with President Trump and members of the Senate.

Kirstjen Nielsen came to Capitol Hill Tuesday to talk about key issues like border security and terrorism, but the Department of Homeland Security secretary instead found herself repeatedly answering questions about President Trump’s language during a recent meeting.

Members of the Senate Judiciary Committee sought Nielsen's description of the president's language at a White House immigration meeting she attended last week, where he reportedly referred to impoverished nations as 's---hole' countries.

“Sir, respectfully, I have answered this question repeatedly,” Nielsen finally told Connecticut Democratic Sen. Richard Blumenthal, who was at least the third lawmaker to raise the issue.“I have nothing further to say about it.”

She acknowledged several times that the meeting, aimed at reaching a bipartisan immigration deal, was “very impassioned” and said several of the lawmakers including Trump used “tough language.” However, she said she did not hear Trump use the racially-tinged word or words attributed to him.

Sen. Dick Durbin, D-Ill., emerged from the meeting saying Trump had made the crude reference about Haiti and African nations in a way that came off as racist. Republicans Tom Cotton, of Arkansas, and David Perdue, of Georgia, claimed Trump had used a variant of the term and in a less offensive manner. Sen. Lindsey Graham, R-S.C., has refused to say exactly what he heard, though he said he confronted Trump about it.

Trump and Republicans want funding for a wall on the sourthern border and an end to chain migration and the visa lottery. Demcorats want amnesty for DACA reclipients, known as "Dreamers."

“What I heard him say was that he’d like to move away from a lottery (based immigration system) to a merit-based one,” Nielsen said.

To be sure, Nielsen confirmed to the DHS post just last month, was hoping to tout a report released earlier in the day by the White House that found that federal courts haves convicted at least 549 people on international terror-related charges since the 9/11 terror attacks.

Durbin emerged from the meeting accusing Trump of a racist slur (Copyright 2017 The Associated Press. All rights reserved.)

But even that finding, which the administration presumably wanted to announce to make a case about the dangers of illegal immigration, was picked apart.

Vermont Democratic Sen. Patrick Leahy questioned why Nielsen didn’t know how many of those convicted came from countries on which Trump is imposing an immigration ban.

Democratic senators also questioned Nielsen about Trump’s apparent suggestion that the U.S. should allow in more people from Norway -- a remark some have interpreted as racist, considering his displeasure for allowing poor, unskilled immigrants from third-world countries in Haiti or from African nations. He had met with the Norwegian leader the day before.

Nielsen said that she thought the president was repeating what the Norwegian Prime Minister Erna Solberg had told him -- that Norwegians are “work very hard.”

Still, Nielsen said, even the president raised concerns about allowing more people from Europe into the country to move America’s diversity-based immigration program to a more skilled-based system, saying being from Norway is not a "skill."

Nielsen argued for the president’s call to build a complete U.S.-Mexico border wall, and knocked back criticism that a physical wall is obsolete.

She cited border security, permanent protection for young illegal immigrants, eliminating the diversity lottery and ending so-called chain migration, in which extended-family members can follow into the U.S. those with Green Cards.

Still, Nielsen’s hardest questions were about Trump’s comments, which some think have set back such talks.

The sharpest criticism came from New Jersey Democratic Sen. Cory Booker, who said: “I’m seething with anger. You are under oath … and you and others cannot remember.”