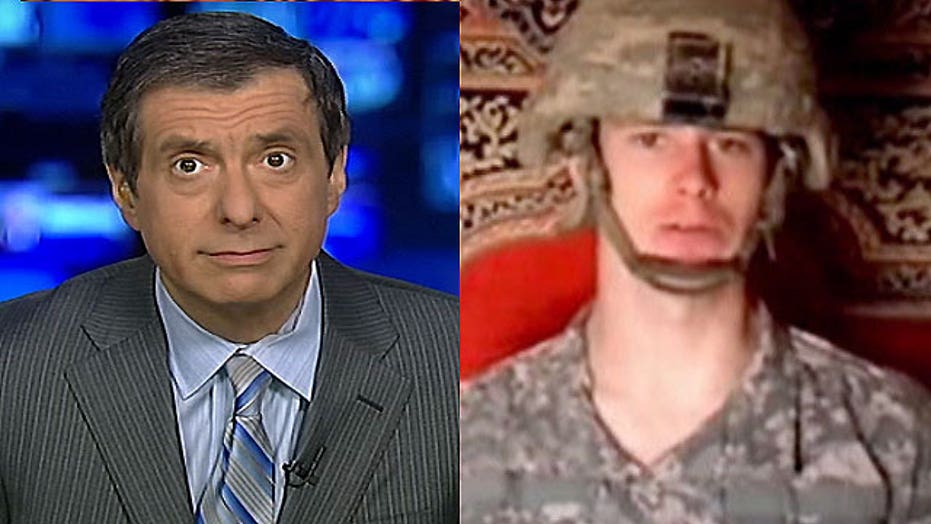 Kurtz: Why the press wasn't AWOL on Bergdahl

It’s hard to imagine now, but the Obama administration initially tried to present the freeing of Bowe Bergdahl as a good news story.

Now that the Army has charged the sergeant with desertion and misbehavior, it’s worth looking back at whether the media bought that narrative. The answer, by and large, is no. And the reason, I believe, is that they felt bamboozled by the White House whitewash of what had taken place, and that fueled the effort to find the real story.

This continued months later, when the Army tried to knock down reports by Fox News and NBC that a decision had been made to charge Bergdahl.

Within 24 hours of Bergdahl’s release last May 31, major news organizations were aggressively raising questions about the way he abandoned his Army unit in Afghanistan.

Initially, the media uproar was about two other issues: why the administration had traded Bergdahl for five Taliban commanders being held at Gitmo—in effect negotiating with terrorists—and why Congress wasn’t fully informed. Most journalists weren’t outraged by the trade, but they did cover the controversy.

Inexplicably, the White House decided to stage a Rose Garden ceremony with Bergdahl’s parents, as if he were some returning hero, and Susan Rice, even more incredibly, said he had served with “honor and distinction.”

But the media unraveled that laughable claim in a hurry. That night, David Martin reported on the “CBS Evening News”: “At some point, Bergdahl will have to explain the circumstances of his capture. When he disappeared in 2009, officials said he had simply wandered off his base by himself without even a weapon.”

“Army Sgt. Bowe Bergdahl’s recovery after five years in captivity has rekindled anger among some of his military peers over how he came to fall into enemy hands and the price the United States has paid to get him back.

“Bergdahl, 28, is believed to have slipped away from his platoon’s small outpost in Af­ghanistan’s Paktika province on June 30, 2009, after growing disillusioned with the U.S. military’s war effort. He was captured shortly afterward by enemy ­forces and held captive in Pakistan by insurgents affiliated with the Taliban. At the time, an entire U.S. military division and thousands of Afghan soldiers and police officers devoted weeks to searching for him, and some soldiers resented risking their lives for someone they considered a deserter.”

The night after that, Jim Miklaszewski reported on “NBC Nightly News” that “serious questions have been raised about just how Bergdahl fell into the hands of the Taliban,” given that he “simply disappeared.” He played a sound bite from Joshua Cornelison, the platoon’s medic:

“He willfully left. He had premeditated, planned out, and left.”

On ABC’s “World News Tonight,” Martha Raddatz aired a clip from Bergdahl’s former team leader, Evan Buetow: “He walked away. He walked right off the base. The fact of the matter is he deserted us in the middle of Afghanistan to go and find the Taliban.”

What really turned the tide that week, though, is when Fox’s Megyn Kelly interviewed six of Bergdahl’s platoon members, all of whom raised their hands when she asked whether they considered him a deserter.

Cody Full, Bergdahl’s former roommate, said: “It doesn't matter what his motives were. We all took an oath and had to abide by orders, and you don't just leave your fellow Americans to join somebody else.”

The Bergdahl unit members had no political ax to grind, they told the truth, they used their names, they appeared on camera—and they were right.

On balance, the media did a solid job. And part of the reason, I think, is that the coverage was led in by such veteran Pentagon reporters as Miklaszewski, Raddatz and Martin. They are well-sourced, understand the issues and instinctively grasp the importance of military loyalty in a war zone.

In January, retired Lt. Col. Tony Shaffer told Bill O’Reilly that he’d been told by senior defense officials that a decision had been made to charge Bergdahl. NBC reported the same information that evening.

Not only did an Army spokesman call those reports “patently false,” but a CNN report took a mocking tone toward what it called “an inflammatory Fox News segment and an anonymously-sourced NBC News story.” Not looking so inflammatory right now.

The media can hardly be accused of playing down the desertion charge now. Despite the German plane crash being the day’s big story, the network newscasts all ran good pieces, and the New York Times and Washington Post gave the decision front-play play, with the Post making it the lead story.

NBC’s Chuck Todd said last year that unnamed White House aides were surprised by the blowback because they didn’t know Bergdahl’s fellow soldiers would “Swiftboat” him, as Todd put it—referring to the former Navy folks who mounted a campaign to torpedo John Kerry in the 2004 campaign over the circumstances in which he won his Vietnam medals.

The Bergdahl furor is an inherently important controversy, to be sure. But I think journalists were sufficiently offended by the “honor and distinction” spin that they made doubly sure to dig up what really happened.