Trump defends Kellyanne Conway after recommendation to remove her from office

President Trump in a phone call with 'Fox &amp; Friends' says he will not fire his counselor amid accusations that she violated the Hatch Act, saying her freedom of speech is trying to be taken away.

House Democrats voted Wednesday to subpoena White House adviser Kellyanne Conway in a fiery hearing over alleged violations of the Hatch Act -- as furious Republicans called it a “political spectacle” and an example of double standards.

The House Oversight Committee voted 25-16 to subpoena Conway to appear before it over a Special Counsel report finding that she violated the Hatch Act. Rep Justin Amash, R-Mich., was the sole Republican to join the Democrats in what was otherwise a party-line vote.

The Office of the Special Counsel, which is separate from the office with a similar name previously run by Robert Mueller, said in a scathing report this month that Conway violated the Hatch Act by “disparaging Democratic presidential candidates while speaking in her official capacity during television interviews and on social media," and recommended she be fired.

But the White House showed no sign of taking action against Conway, calling the OSC ruling “unprecedented” and suggesting it was politically influenced.

The Hatch Act's purpose is to ensure federal programs are “administered in a nonpartisan fashion, to protect federal employees from political coercion in the workplace, and to ensure that federal employees are advanced based on merit and not based on political affiliation,” according to the OSC. The office is an independent federal agency that monitors compliance with that law and others.

Wednesday’s vote came after a testy hearing in which Republicans and Democrats threw back and forth accusations about the findings. Chairman Elijah Cummings, D-Md., said the case was not about whether Conway was a good advisor but “a question of whether they obeyed the law, period.”

“This is about right and wrong, this is about the core principle of our precious democracy that nobody...in this country is above the law,” he said. “Contrary to claims by Ms. Conway and President Trump, this is not a conspiracy to silence her or restrict her First Amendment rights, this is an effort to enforce federal law.”

Other Democrats noted Special Counsel Henry Kerner was appointed by President Trump, and backed his findings.

But Rep. Jim Jordan, R-Ohio, said the findings were “outrageous, unfair and...flat-out wrong.” He also alleged double standards, saying that Obama administration employees had done the same thing but had never been found to have violated the act.

“But a senior adviser to the President of the United States can sure as heck go on cable news shows and answer questions -- David Plouffe did it, David Axelrod did it, John Podesta, they all did it for President Obama, but now it’s a strong-willed Republican helping President Trump, oh can’t have that,” he said.

Things got even more heated when Rep. Mark Meadows, R-N.C. accused Democrats of a political spectacle.

WATCHDOG DEFENDS EXPLOSIVE REPORT SEEKING CONWAY'S FIRING, SAYS HE HAS NO 'ANIMUS' TOWARD HER

Cummings shot back and said that: ‘We have gotten to a point, sadly, where disobeying the law is OK.”

“But it’s not breaking the law,” interjected Meadows, causing Cummings to shout, “Yes it is!”

The committee had requested that Conway testify at the hearing, but the White House wrote to Cummings on Monday declining the request, citing a precedent it said had been adhered to by multiple administrations.

Amid the partisan back and forth, Special Counsel Kerner told lawmakers that his office was not trying to assist anyone in silencing Conway. He went on to say that they had received “numerous, separate” complaints about Hatch Act violations. He said that Conway chose not to respond to his office, and her violations only increased.

He cited in particular, comments she made about Democratic candidates, including on “Fox & Friends” in February where she called Sen. Cory Booker, D-N.J., “tinny” and “sexist.” 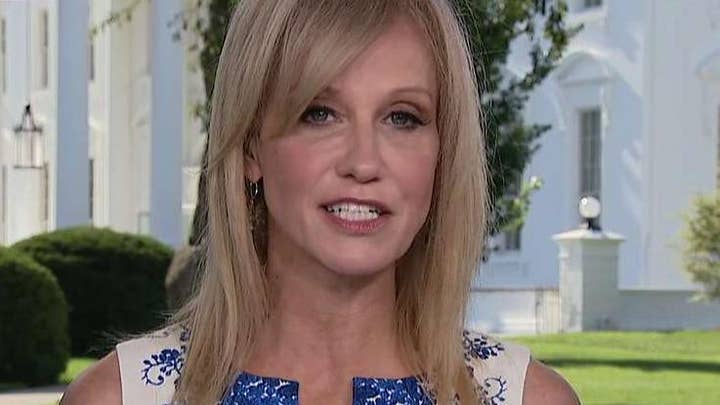 “Those statements are not facts, they are campaign rhetoric and they are forbidden by the Hatch Act when she says them in her official capacity,” he said.

The OSC had previously referenced several examples of Hatch Act violations, including two already reported in a March 2018 report during separate television interviews. The OSC said that at the time, Conway advocated for and against candidates in the 2017 Alabama Senate special election between controversial GOP candidate Roy Moore and Sen. Doug Jones—the first Democrat elected to represent the state in the Senate in decades.

While the OSC recommended Conway be removed, Kerner said in an interview with Fox News this month that the decision to remove her is Trump's alone.