The Office of Special Counsel recommended Thursday that Kellyanne Conway be fired from the federal government for violating the Hatch Act on “numerous occasions.”

The Hatch Act is a federal law that limits certain political activities of federal employees.

The OSC, which is separate from the office with a similar name previously run by Robert Mueller, said in a scathing report released Thursday that White House Counselor Conway violated the Hatch Act by “disparaging Democratic presidential candidates while speaking in her official capacity during television interviews and on social media.

“Ms. Conway’s violations, if left unpunished, would send a message to all federal employees that they need not abide by the Hatch Act’s restrictions. Her actions thus erode the principal foundation of our democratic system—the rule of law,” the OSC said in a statement Thursday, noting that Conway has been a “repeat offender.”

But the White House showed no sign of taking action against Conway in response, calling the OSC ruling “unprecedented” and suggesting it was politically influenced.

“The Office of Special Counsel’s (OSC) unprecedented actions against Kellyanne Conway are deeply flawed and violate her constitutional rights to free speech and due process. Others, of all political views, have objected to the OSC’s unclear and unevenly applied rules which have a chilling effect on free speech for all federal employees,” deputy press secretary Steven Groves said in a statement Thursday.

“Its decisions seem to be influenced by media pressure and liberal organizations – and perhaps OSC should be mindful of its own mandate to act in a fair, impartial, non-political manner, and not misinterpret or weaponize the Hatch Act.”

The letter, dated June 11, delivered a point-by-point rebuttal of the OSC report and said it is “based on multiple fundamental legal and factual errors, makes unfair and unsupported claims against a close adviser to the President, is the product of a blatantly unfair process that ignored statutory notice requirements, and has been influenced by various inappropriate considerations.”

The Hatch Act's purpose is to ensure federal programs are “administered in a nonpartisan fashion, to protect federal employees from political coercion in the workplace, and to ensure that federal employees are advanced based on merit and not based on political affiliation,” according to the OSC. The office is an independent federal agency that monitors compliance with that law and others.

The OSC opened two cases focused on allegations Conway violated the Hatch Act by engaging in “both official and political activity” -- during her media appearances and on her Twitter account, @KellyannePolls.

The report stated, "Ms. Conway regularly participated in official media interviews in her capacity as a White House spokesperson to answer reporters’ questions about the Administration. Beginning in February 2019, Ms. Conway, during official media appearances, engaged in a pattern of partisan attacks on several Democratic Party candidates shortly after they announced their candidacy for President,” detailing instances involving Sens. Cory Booker and Elizabeth Warren, and former Rep. Beto O’Rourke.

The OSC stated that in one Feb. 19 interview on "Fox & Friends," Conway “insinuated that Senator Booker was ‘sexist’ and a ‘tinny’ ‘motivational speaker,’” and claimed Warren, D-Mass., was “’lying’” about her ethnicity. Conway also “attacked” O’Rourke for not “thinking the women running are good enough to be President.” 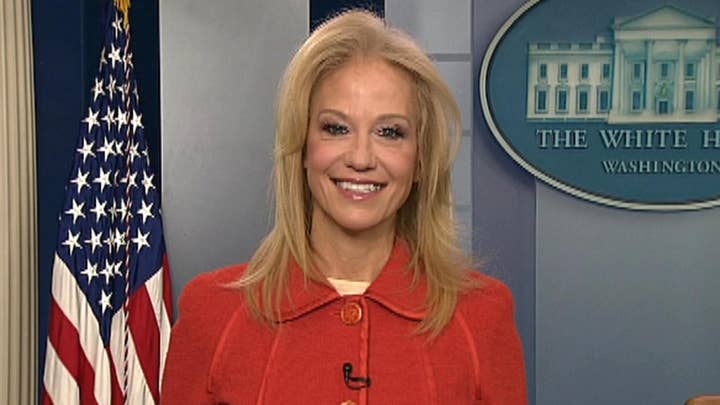 “Each of these actions constitutes a violation of the Hatch Act’s prohibition on the use of official authority to interfere with or affect an election,” the report stated, adding that the comments “were clearly aimed at influencing voters and the election.”

With respect to Twitter, the report referenced tweets mocking Booker, D-N.J., for sounding “like a Hallmark card,” and a tweet Conway re-tweeted that referred to Biden as “Creepy Uncle Joe.”

“Ms. Conway’s advocacy against the Democratic candidates and open endorsement of the President’s reelection effort during both official media appearances and on her Twitter account constitute prohibited political activity under the Hatch Act,” the report said.

The case stemmed, in part, from two complaints about Conway's media conduct and use of Twitter filed by Citizens for Responsibility and Ethics in Washington (CREW). The watchdog group echoed the OSC's calls for Conway to be removed and said the "violations will not be taken lightly."

The OSC referenced several examples of Hatch Act violations, including two already reported in a March 2018 report during separate television interviews. The OSC said that at the time, Conway advocated for and against candidates in the 2017 Alabama Senate special election between controversial GOP candidate Roy Moore and Sen. Doug Jones—the first Democrat elected to represent the state in the Senate in decades.

According to the report, the OSC “repeatedly requested that Ms. Conway comply with the law,” and stated that it “sent a letter” to Conway “about her impermissible” Twitter use.

The OSC called her violations “egregious, notorious, and ongoing.”

“Ms. Conway failed to comply with OSC’s requests and, in fact, escalated her partisan critiques of candidates after OSC had communicated to the White House that her conduct violated the law,” the report stated. “In sum, Ms. Conway continues to violate the Hatch Act and signals that she will not comply with the law.”

As noted by the OSC, Conway later downplayed the law in a media interview, saying: “If you’re trying to silence me through the Hatch Act, it’s not going to work,” and “Let me know when the jail sentence starts.”