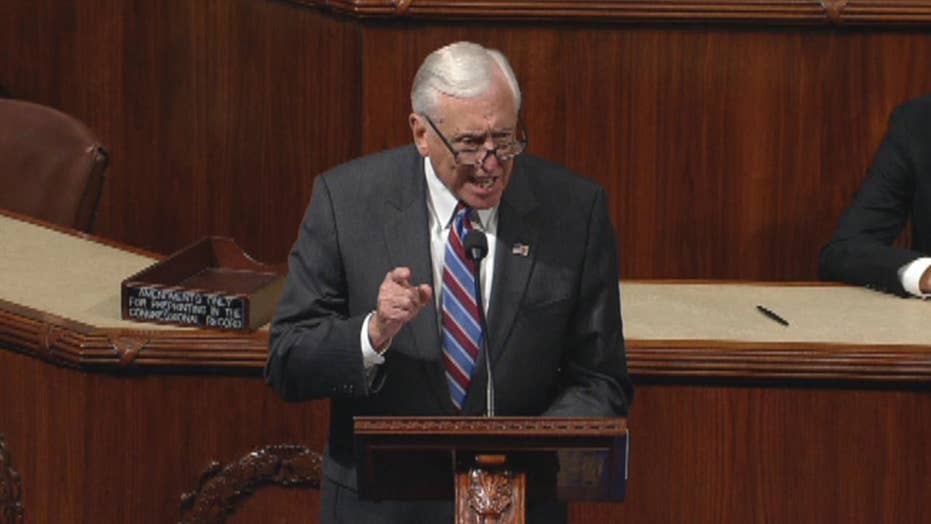 Raw video: Thunderous reaction after Rep. Steny Hoyer proposes an amendment to 'slam the door in the face of the Russian bear' and other adversaries that seek to steal the integrity of our elections.

They began chanting “USA, USA, USA”-- but it wasn't a Trump rally.

House Democrats on Thursday erupted into the chants on the floor of the House of Representatives after House Minority Whip Steny Hoyer, D-Md., delivered a fiery speech condemning Russian President Vladimir Putin for election meddling and accusing Republicans of not doing enough to ensure security of future elections.

“Surely, we can rise above pandering to party and Putin to act on behalf of our freedom and our security,” Hoyer said to applause from Democrats, over the bangs of the gavel as the House was called to order by the speaker.

It came as the House moved forward with a spending bill that eliminates new funding for election security grants to states, amid protests by Democrats who say Republicans are not doing enough to prevent Russian meddling in U.S. elections.

“We have sworn an oath to defend our constitution and our liberty against all enemies foreign and domestic,” Hoyer said.

Congress approved $380 million in the current budget for a grant program overseen by the federal Election Assistance Commission. Democrats want to continue funding through 2019, but Republicans say money is still available to states and new spending is not needed.

A Democratic amendment to extend funding was defeated, 182-232.