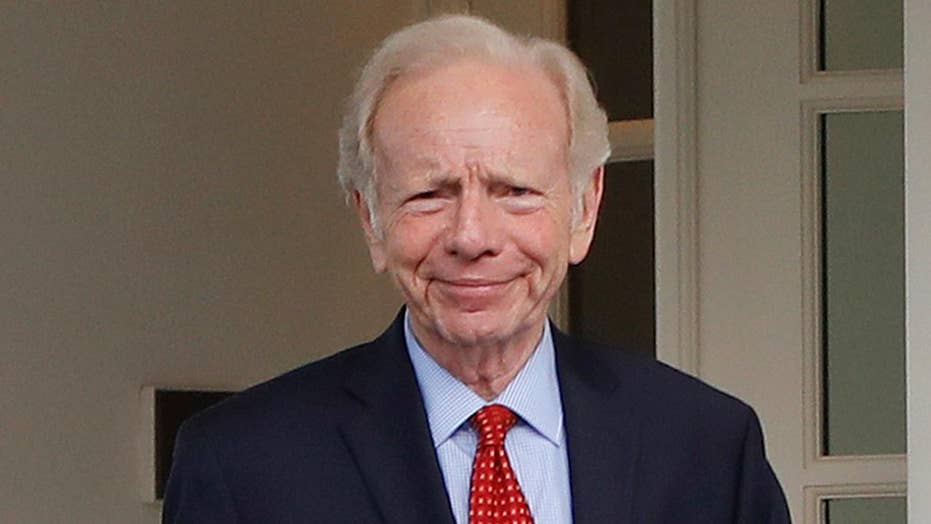 Why is the left rejecting Lieberman as a possible FBI chief?

Congressional Democrats already are speaking out against the prospect of former Sen. Joe Lieberman being nominated for FBI director, though President Trump has not announced his decision.

The timetable for a nomination is unclear, with Trump leaving for his first international trip as commander-in-chief without naming his pick.

Lieberman emerged a day earlier as the apparent front-runner, though, a development that received a largely positive response from Republicans.

“Lieberman is probably the only person who can get 100 votes in the Senate,” Senate Majority Whip John Cornyn, R-Texas, said on Capitol Hill on Thursday, after a Senate briefing with Deputy Attorney General Rod Rosenstein. Cornyn had been on the White House shortlist to replace Comey, but with withdrew himself from consideration.

But without Democrats, those “100 votes in the Senate” would not materialize.

“There couldn’t be a worse time to take the unprecedented step of handing the FBI over to a politician—that includes Sen. Lieberman,” an aide for Senate Democratic leadership told Fox News on Friday.

Senate Minority Leader Chuck Schumer, D-N.Y., argued against a “career politician” of either party to lead the FBI on Thursday morning on the Senate floor, but he did not specifically name Lieberman.

Sen. Claire McCaskill, D-Mo., also expressed disapproval, telling reporters on Capitol Hill Thursday that it would be “a mistake” to nominate him.

“I don’t think there’s going to be much excitement about that from our side of the aisle. Not because we don’t respect Joe Lieberman. But we need a law enforcement professional, not someone who’s run for office before,” McCaskill said. “We don’t need anyone who’s put on a red shirt, or a blue shirt – or who’s campaigned for president.”

Lieberman, 75, has extensive political, and law enforcement experience. He was a two-term attorney general for the state of Connecticut, spanning from 1983 until his resignation in 1989 when he was elected to the U.S. Senate, serving from 1989 until 2013—first as a Democrat, then as an independent.

Lieberman ran as a vice president on Al Gore’s 2000 ticket, and ran for president in 2004. He then became an independent after losing the Connecticut Democratic primary in 2006. He won re-election, and two years later, further angered Democrats by endorsing Sen. John McCain, R-Ariz., for president against the eventual winner, Barack Obama. Lieberman even spoke at the 2008 Republican National Convention.

Democrats considered tossing Lieberman out of their caucus after learning he spoke at the 2008 Republican National Convention, and years later, resentment still lingers.

When he was in Congress, Lieberman joined forces with Sens. McCain and Lindsay Graham, R-S.C.—they were referred to as the “Three Amigos,” especially at the time that they were pushing for the surge in Iraq, and during President Obama’s first term.

Graham celebrated the prospect of Lieberman replacing Comey and said: “If the president picked Joe Lieberman, he’d be doing the country a good service and, I think, the FBI, a good service.”

But Sen. Chris Murphy, D-Conn., who holds Lieberman’s old seat, repeated the same sentiment heard from other Democrats on the Hill, including moderate Sen. Joe Manchin, D-W.Va., who praised the ex-senator but suggested a preference for an apolitical figure leading the FBI.

“He has a history of angering Democrats and Republicans, which is probably a good experience for being FBI director,” Murphy said. “But my concern is about someone with a political background. This is a moment for someone with a law enforcement background.”

Trump said Thursday that he was “very close” to naming a new FBI director, and said his leading contender was Lieberman, but White House officials told Fox News on Friday there would be no FBI announcements before the president’s overseas trip.