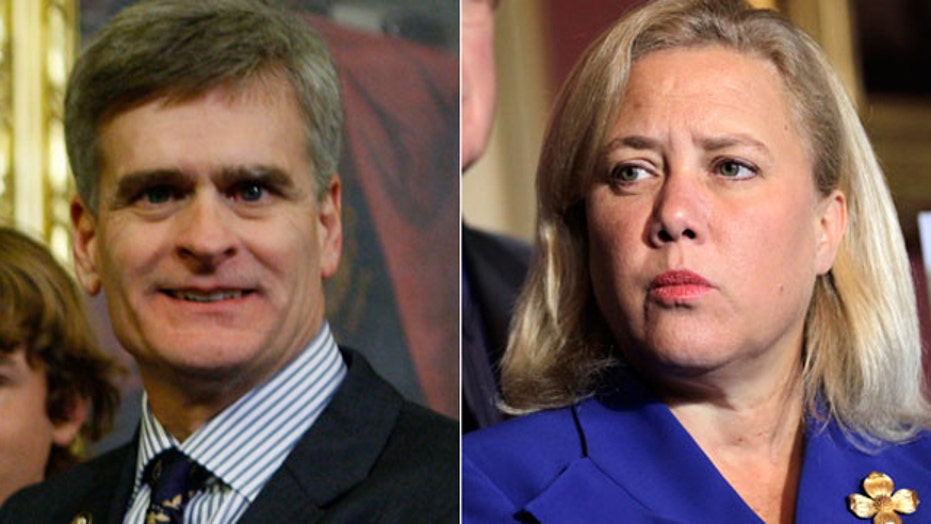 Louisiana Sen. Mary Landrieu faces the run-off of her political life next month to keep her seat after nearly 20 years in office. But more than just a hard-driving Republican opponent, she faces the reality that Democrats -- particularly white Democrats -- are a vanishing breed in the Deep South, and she might be one of the last.

“It looks like we are entering a new era,” said Ed Chervenak, professor of American politics at the University of New Orleans, “where she is the last of the Southern Democrats.”

Landrieu got barely 42 percent of the vote Tuesday, followed by Republican Bill Cassidy, with nearly 40 percent, and Republican Rob Maness, who came in third with 14 percent. According to state rules, the two top vote-getters will compete in a run-off scheduled for Dec. 6.

On election night, faced with the prospect of another 30 days of brutal campaigning, the 58-year-old Landrieu took a positive tone that has since become a mantra for her supporters: that the run-off is about Louisiana and not about the unpopular president in Washington.

“And now we have the race that we have wanted, for months," Landrieu said during a speech in New Orleans. "Cassidy can no longer just spout President Obama's name at debates and think that's enough." She promptly called for six debates in the next month. So far, Cassidy has agreed to only one.

But election observers say Landrieu faces difficult odds on two key fronts: the sheer numbers are against her, and the Democratic Party appears to be losing interest now that the majority in the Senate has been lost. According to media reports Thursday, Democrats' Senate campaign arm is pulling its planned advertising spots for Landrieu in the state through Dec. 6, indicating a lack of confidence. The Democratic Senatorial Campaign Committee responded by saying they support Landrieu “100 percent.”

A recent NBC/Marist poll showed that in a head-to-head matchup, Cassidy would get 50 percent of the vote while Landrieu would draw just 45 to 46 percent.

“She is going to have a hard time explaining to people why she voted with Obama over 90 percent of the time, and convincing enough voters – Republicans and Independents – that they should send her back there (to Washington),” said Henry Barbour, RNC committee member and GOP strategist in Mississippi.

According to exit polling and analysis after Tuesday’s election, Landrieu’s numbers problem goes way deeper than one race.

“She is basically confronting the long-term loss of Democratic identifiers throughout the state,” and the entire Deep South, said Chervenak. “What we have seen is a realignment in a region that was once dominated by the Democratic Party, which is now solidly Republican.” He said in 1996, two-thirds of Louisiana was Democratic, today that number is 47 percent.

But the losses weren’t confined to the Senate: Rep. John Barrow, a conservative Democrat from Georgia, lost his seat to a Republican after five terms.

According to Chervenak, most white voters in Louisiana today are Republican -- in 1996, 58 percent of white voters were Democrats, today only 33 percent are. It’s like that all over the Deep South. That’s why Democrats had seen the turnout of African-American voters, who typically vote Democratic by vast majorities, as key to winning on Tuesday.

According to exit polling in Louisiana, African-Americans made up 30 percent of the vote, and cast their ballots 94 percent for Landrieu. But Landrieu received only 18 percent of the white vote, which was 64 percent of the total on Tuesday.

Parmley acknowledged that Democratic turnout on all fronts could have been better. He added that Republicans were great about “nationalizing” every race, using scare tactics and cleaving to anti-Obama talking points that had nothing to do with local bread-and-butter concerns. If Democrats could keep the issues local, he said, “we could win in the South.”

Barbour said conservative southern voters feel that the urban power centers of the country are “out of touch” with ordinary Americans. Democrats, especially, have no clue.

“I think the Democrats are struggling because the Democratic Party, certainly nationally, has become out of touch with our values in the South and I particularly think that first and foremost, President Obama in the White House, he was what this election was all about.”

But Republicans can’t let their guard down in Louisiana, he said. “Landrieu is not to be underestimated. She has proven in the past if you take her for granted she will beat you.”