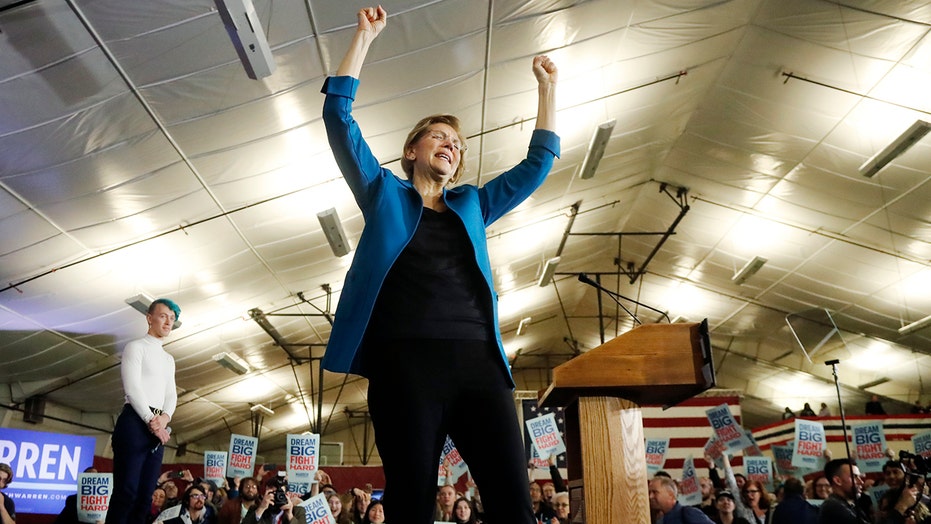 Sen. Elizabeth Warren’s presidential campaign appears to be concentrating its firepower on Nevada rather than South Carolina – with those two states on deck in the presidential-nomination calendar.

Warren’s campaign confirmed to Fox News on Wednesday that they will not continue their current TV ad buy in South Carolina when it expires on Feb. 16. Instead, they’ll use the money -- plus additional spending – to beef up the current TV spots running in Nevada and to also run TV spots in Maine, which is one of the 14 Super Tuesday states that hold contests on March 3.

Sen. Elizabeth Warren of Massachusetts taking selfies with supporters at the University of New Hampshire on primary day, in Durham, N.H.

While the Warren campaign said it still would go up with radio, digital and print ads in South Carolina, the move served as a clear sign that for now, Nevada’s Feb. 22 caucuses outweigh the primary in South Carolina a week later. That’s not the case for former Vice President Joe Biden, who finished an extremely disappointing fifth in New Hampshire. He considers South Carolina as his campaign’s firewall.

Sen. Amy Klobuchar of Minnesota – whose strong third-place finish in New Hampshire exceeded expectations and gave her a major boost – has been beefing up her operation in Nevada.

Klobuchar’s campaign confirmed to Fox News it’s going up with a seven-figure TV ad buy in Nevada starting Wednesday. The campaign touted it’ll have 50 staffers on the ground in the state by later this week. And, officials said they’ll start deploying troops to the Super Tuesday states starting this weekend.

Former South Bend, Ind., Mayor Pete Buttigieg, who came in a close second to primary winner Sen. Bernie Sanders of Vermont, is also pouring more troops into Nevada. His campaign announced on Wednesday that they’ll double their staffers in the state to nearly 100 and boost their investment in TV and digital ads.

“The vote in New Hampshire last night was not enough for us to create the practical wind at the campaign’s back to go on to the next round of voting. So I have decided to suspend the campaign, effective immediately,” Patrick said in a statement.

Even though he was relatively well known in New Hampshire as the two-term governor from a neighboring state – and he heavily campaigned in the first-in-the-nation primary state since declaring his candidacy in mid-November -- Patrick grabbed less than 1 percent of the vote, according to the latest results. His departure means there are no longer any other African-Americans in the race.

Tech entrepreneur Andrew Yang dropped out of the race after a poor showing New Hampshire, and now Hawaii Rep. Tulsi Gabbard has been moving to win over his supporters by emphasizing her support for a universal basic income.

In a tweet Wednesday, Gabbard wrote: “To our many #YangGang friends, I hope that you will join our campaign.”

Yang, a relative unknown before the 2020 campaign, rose to fame in large part due to the popularity of his proposed "Freedom Dividend" – a universal basic income (UBI) that would pay each adult American $1,000 per month. Yang said Thursday he no plans to endorse any other candidate yet, but it’s hard to imagine him backing anyone who doesn’t embrace a UBI.

“I'll continue to carry this torch of Universal Basic Income that will re-invigorate our middle class and those struggling just to make ends meet, bridge the income gap and unleash an era of entrepreneurship and productivity,” Gabbard tweeted.

As for Yang, there’s already speculation about what’s next for him, ranging from running again for president in four years to making a bid for another office, like mayor of New York.

President Trump – as expected – handily won New Hampshire’s Republican primary, as he had no serious challenger. But what’s raising eyebrows are the total of votes he got in a noncompetitive race.

Trump secured more than 120,000 votes in the Granite State. As Fox News’ Tyler Olson reported, that’s more than double what incumbent President Barack Obama got in the state’s 2012 primary, when he managed to win 49,080 total votes.  It also dwarfs the total of other incumbent presidents: then-President George W. Bush received 53,962 votes in the largely-uncontested GOP primary in New Hampshire in 2004. And in 1996, incumbent President Bill Clinton received 76,797 votes in New Hampshire's primary.

Why did this happen?

It follows a coordinated effort by the Republican National Committee and the Trump campaign to drive up turnout for Trump in New Hampshire -- something the other incumbent presidents didn't do. Trump himself revved up his supporters at a packed and fiery rally in Manchester, N.H., on Monday, the eve of the state's primary.

But it also is an indication that the Republican base is all-in on Trump as he prepares to face the Democrats’ eventual nominee in a reelection battle this November.

Trump lost New Hampshire by fewer than 3,000 votes to Hillary Clinton in the 2016 election – and his campaign sees the Granite State as one of the few opportunities flip a state from blue to red.

The prospect of Bernie Sanders making it to the convention as the Democrats’ nominee for president just got real for some factions of the party after his popular vote victories in both Iowa and New Hampshire. An anti-Sanders push has been escalating, previewing the sort of attacks likely to appear between the democratic socialists and the more establishment wings of the party.

“The Sanders socialist issue is real and dangerous,” read a memo this week from a super PAC supporting Biden’s White House bid.

The memo on Monday from the Unite the Country super PAC, which was obtained by Fox News, added: “Biden is 100 percent correct. Democrats in swing areas in the country will have to hide from Sanders. In 2018, Sanders-backed candidates went 0-40 in swing areas. We cannot risk the house, state houses, and also have no shot of dislodging McConnell with Bernie at the top of the ticket.”

There also were reports that the Democratic Majority for Israel – a pro-Israel group – has been planning to run ads against Sanders in Nevada – which will be the next state to hold caucuses on Feb. 22. The group spent nearly $700,000 to target Sanders with ads leading up to the Iowa caucuses.

Reacting to those efforts, Sanders spokesman Mike Casca told Mediaite the ad campaign was evidence of the candidate’s viability. “Hard to think of a better measure of electability than winning the first two states.”