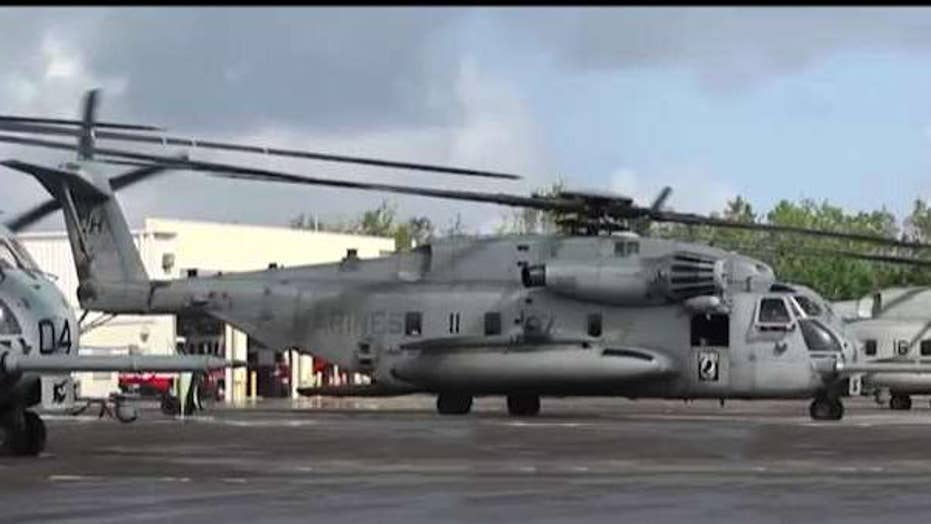 Military could suffer in next year's budget

Billions of dollars meant for defense may never make it to the armed forces if Congress doesn't act when it returns to work next month.

President Trump signed a $700 billion defense budget earlier this month, but budget caps put in place in 2011 remain on the books, robbing the Pentagon of much-needed money to rebuild the military. That drew concern from Senate Majority Leader Mitch McConnell, R-Ky., on Capitol Hill Friday.

"Defense has actually been hit harder under the Budget Control Act than domestic programs have," McConnell said. "So, I think there's an urgency there."

A short-term spending plan keeps the military funded through Jan.19, but unless the cuts are repealed next month, roughly $100 billion will be axed from the budget and Trump's goal of rebuilding the military will be in jeopardy.

"We make the best military product in the world. Nobody is even close," Trump said Friday while signing both the spending measure and the massive tax reform plan into law. "So we are ordering $4 billion worth of missile defense," he added, referencing emergency funding to counter the threat from North Korea’s ballistic missiles.

The chairman of the House Armed Services Committee says both parties are to blame for the looming defense cuts.

"Most everybody agrees that we need to spend more on defense, but you've got Republicans who want to cut other parts of the budget, you've got Democrats that want to increase other parts of the budget," Mac Thornberry, R-Texas, told Fox News in a recent interview. "So everyone's trying to use the defense budget as leverage for these other things. I think that's wrong."

Today, Army helicopter pilots are flying fewer hours than at any time in the past 30 years, according to testimony by Maj. Gen. William K. Gayler -- the head of Army aviation -- before a House Armed Services subcommittee on readiness.

Problems extend to the other services as well. According to the head of naval aviation, just 31 percent of the Navy's 542 F-18 Super Hornet jets are fully mission capable and fully half of them can't fly at all.

Meanwhile, Air Force Secretary Heather Wilson says her force is approximately 2,0000 pilots short of the number required and officials say only half its fleet of B-1 and B-2 bombers can fly.

Only 37 percent of available Marine Corps heavy-lift helicopters can fly and that's not even counting the roughly 60 CH-53E helicopters missing on the flight line.

Even more sobering, twice as many American troops have been killed in non-combat aircraft crashes this year compared to last year

"Last year in aviation, we had a horrible safety year, probably the worst year in 10 years,” Commandant of the Marine Corps Gen. Robert Neller told a Reagan National Defense Forum panel hosted by Fox News' Jennifer Griffin earlier this month. While Neller wouldn’t link the spike in recent crashes to the condition of the jets and helicopters, he echoed what other U.S. military leaders have said about fewer hours of training for his pilots because of the shortage of aircraft.

At the same forum, the shortage of ready aircraft drew a stark warning from a former top Pentagon official.

"Were we to find ourselves in a high end conflict with Russia or China," said former Under Secretary of Defense for Policy Eric Edelman, quoting a RAND study released earlier this month, "we could lose."