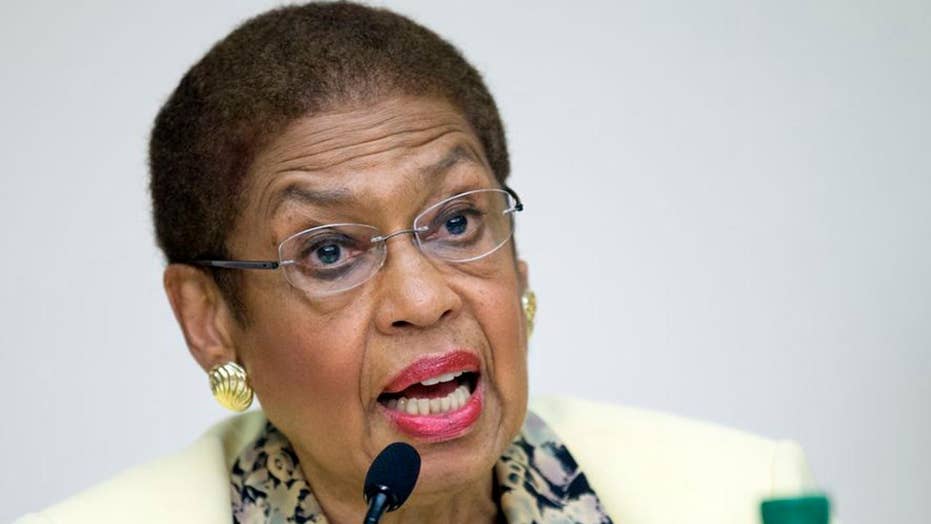 With Democrats in control of the House, the move for D.C. statehood has once again gained momentum; Doug McKelway reports from Washington.

Holmes Norton cited the statue’s “problematic depiction of the fight to achieve emancipation” as grounds for its removal. The statue shows Lincoln standing over a shackled slave holding the Emancipation Proclamation.

“Although formerly enslaved Americans paid for this statue to be built in 1876, the design and sculpting process was done without their input and it shows,” Holmes Norton said in a statement. “The statue fails to note in any way how enslaved African Americans pushed for their own emancipation.”

Holmes Norton claimed that the former slaves who funded the statue “were only recently liberated” and were “grateful for any recognition of their freedom.”

The delegate said the statue was on National Park Services (NPS) land, and she would first work to see if NPS could remove the statue without an act of Congress and move it to a museum.

Historic monuments and statues have become the targets of anger and vandalism during Black Lives Matter protests in the wake of George Floyd's police custody death in Minneapolis at the end of May.

Holmes Norton’s push came one day after officials announced the renowned Teddy Roosevelt statue outside the Museum of Natural History in New York City would be removed. That statue depicts Roosevelt on horseback and a black man and indigenous person standing behind him, said to make them appear “racially inferior.”

Over the weekend protesters tied ropes and tried to topple a statue of former president Andrew Jackson in Lafayette Square Park, but were stopped by law enforcement.

President Trump has repeatedly expressed his opposition to removing statues of any kind and called on law enforcement to crack down hard against it.

The president said Monday that he will soon issue an executive order meant to protect public statues and monuments from being damaged or destroyed.

On Tuesday, New York Gov. Andrew Cuomo said protesters taking it upon themselves to remove statues was a “healthy expression,” though acknowledged it could be overdone.

“It’s a healthy expression of people saying let’s get some priorities here and let’s remember the sin and mistake that this nation made and let’s not celebrate it,” said Cuomo. “Can you overdo it? Of course you can. I don’t think we’ve done so in New York.”