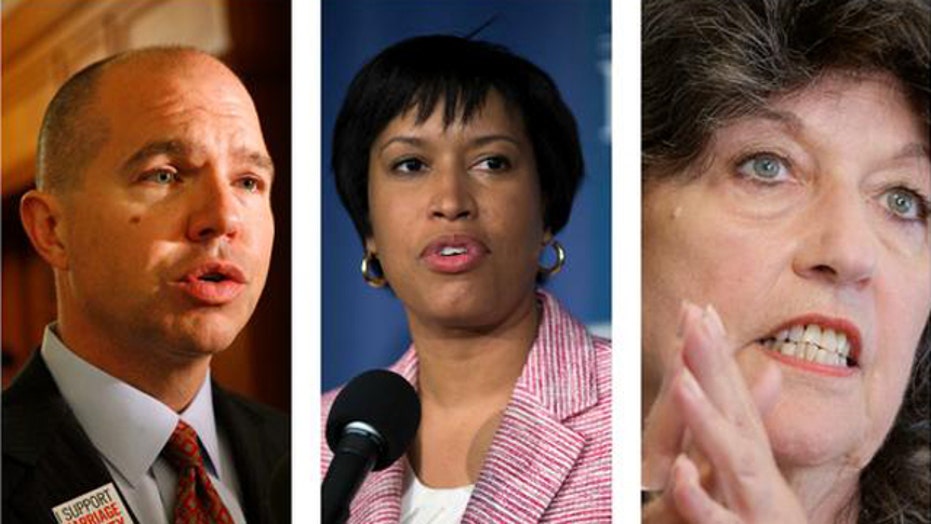 Independent tries to knock off Democrat in DC mayor race

WASHINGTON – David Catania is trying to do something historic -- convince Washington, D.C., voters to elect a non-Democrat as mayor.

Catania, a District of Columbia council member, is a former Republican turned independent. This automatically makes his mayoral bid an uphill climb -- but as he tries to break Democrats’ hold on power, he's mounting an aggressive campaign promising to improve the city’s struggling public school system and reform a City Hall racked with corruption.

“I think the timing is perfect because voters tell me they are sick and tired of this political machine,” Catania told FoxNews.com this week. “They want a government that listens to them.”

Catania claims to offer a fresh start for residents weary of the corruption and decades of ward politics. Over the past three years, three of Catania’s fellow council members, all Democrats, and five people connected to Democratic Mayor Vincent Gray’s 2010 reelection effort have pleaded guilty to federal and other corruption or campaign-finance charges.

Catania, who is white, also is an openly gay candidate in a city considered one of the most liberal in the country. He touts a progressive agenda at a time of economic development in which commuter bike lanes and joints selling $14 Paloma cocktails are rapidly replacing corner liquor stores. Catania also has led efforts to legalize same-sex marriage and helped save the only hospital in the city’s two poorest, mostly black, wards -- all of which could endear him to a wide range of voters.

However, the 46-year-old Catania’s biggest challenge might just be political history.

The nation’s capital has elected only Democratic mayors since it started holding public elections in 1974.

In addition, the District never has elected a white or openly gay mayor. And Democrats still account for 76 percent of the city’s 456,633 registered voters, according to most recent figures from the city election board.

With just six weeks remaining before Election Day, an NBC4/Washington Post/Marist poll shows Catania behind 17 percentage points against Democratic frontrunner Muriel Bowser, who is black and a fellow council member.

“The Democrat label still carries a lot of weight,” said Will Sommer, who covers D.C. politics for The City Paper, an alternative weekly.

He thinks Catania remains “saddled” with the Republican brand. And he argued a vote for him is not necessarily a vote to clean up City Hall, considering Bowser was the candidate who ousted Gray in the party’s April primary. (Gray has denied wrongdoing and has not been charged in the ongoing federal probe.)

Catania contends the race is much closer based on other polling, including one commissioned by his campaign that shows him and Bowser separated by just 3 percentage points.

Beyond the city’s political history and headwinds, Catania also appears to be a victim of his own zealousness toward improving the city and taking down those who stand in his way.

Since the start of the race, he relentlessly has attacked Bowser’s council record in the same take-no-prisoners way that he has addressed many issues and political detractors since getting elected in 1997.

Last week, in their first debate, Catania zeroed in on Bowser’s efforts to reform public schools, whose students lag behind those in essentially every other major U.S. city in math and reading scores, despite making some gains in the past few years.

“When you ran for council in 1997, you promised to make education your No. 1 priority, and in seven years … you have not introduced a single measure, nor is there a footprint on the subject,” said Catania, calling Bowser’s single resolution on the issue a “platitude.”

Bowser, in an attempt to spotlight Catania’s approach to politics, pointed out that he was on the losing end of a 2007 City Hall battle to approve taxpayer funding to build a stadium for the Washington Nationals and has yet to visit the ballpark.

“That kind of speaks to his temperament and how he will represent our city,” she said.

In 2012, Catania and Marion Barry, a fellow council member and former mayor, infamously engaged in a profanity-laced exchange over the hospital issue that nearly turned physical.

Catania, a Georgetown University law school graduate, essentially accused Barry of turning his back on the under-served population he represents and allowing his personal problems to interfere with his commitment to public service. “Elvis has been to United Medical Center more than Marion Barry,” said Catania, according to The Washington Post.

Barry, who served prison time after being caught on a 1989 FBI surveillance video smoking crack, said Catania’s behavior was part of pattern of him being “rude” and “disrespectful.”

“If I wasn’t on the council, there would be fisticuffs,” Barry also said.

Sommer thinks Catania’s occasionally “caustic” behavior has alienated some voters, pointing to a recent poll showing likely voters said roughly 2-to-1 that Bowser has a better “personality and temperament.”

“But you can see he’s made a concerted effort to change after 17 years of hard charging, maybe after starting to think about running for mayor,” Sommer said.

Still, turning up the heat on Bowser in the closing stages of the race may not be a bad strategy, considering District voters have a history of electing come-from-behind candidates.

A second independent in the mayoral race, Carol Schwartz, also a former Republican, now pulls 16 percent of the vote in the latest poll, which stands to hurt Catania the most in a close finish with Bowser. Fourteen percent of likely voters remain undecided, according to the survey.

Other factors include voter turnout.

The city has 456,633 eligible voters. However, just 27 percent of registered Democrats voted in the April primary, the lowest turnout for a mayoral primary in more than three decades. And just 12 percent of them voted for Bowser. And those percentages are not expected to increase in November, without a presidential race to bring out voters, which could help Catania.

“I call it the ‘yuck factor,’” Chuck Thies, who managed Gray’s unsuccessful re-election campaign, told The Associated Press. “People get tired of hearing about one scandal after the next after the next, and they say, ‘You know what? Yuck. I’m not participating.’”

Bowser, meanwhile, is sticking with her motto of “if Democrats vote, Democrats win. Period, end of story.”

Bowser campaign spokesman Joaquin McPeek said Tuesday that the candidate's closing strategy is no different than what got her to this point -- going door to door, hosting meetings and connecting with voters at the ground level.

“Muriel continues to do what won her the primary and what we believe will win in November,” he said.

Another factor is the strong local economy, which also helped bring to the city roughly 80,000 more registered voters in the past four years, among them many who appear to have a vested interest in cleaning up City Hall.

Catania points out that the prosperity never reached the two poorest wards, where the unemployment rate hovers at about 18 percent.

“Nothing has really changed there,” Catania said. “I think the population is so ready for an independent outsider.”