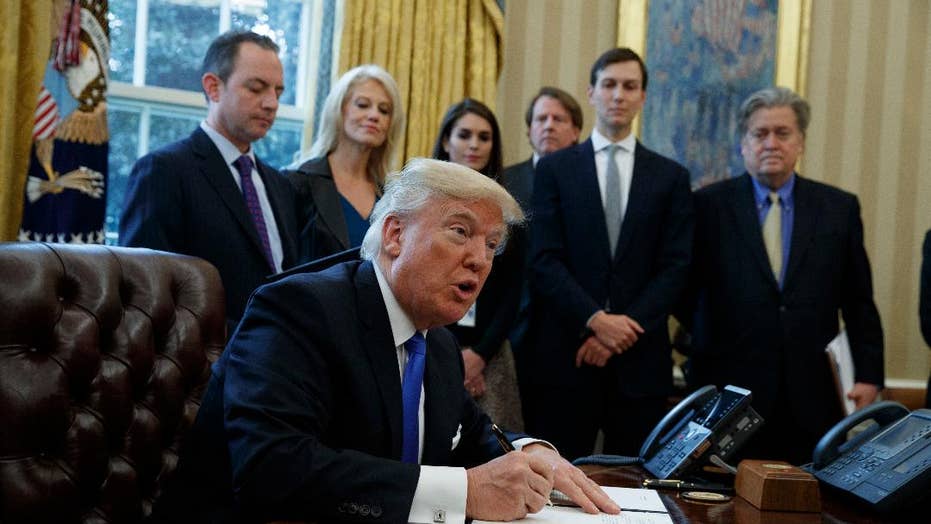 Strategy Room: David Mercer and Brad Blakeman weigh in on what could come of the Dakota Access Pipeline after President Trump signed executive orders today

North Dakota is expected to gain $100 million or more annually in tax revenue once crude oil begins flowing through the Dakota Access Pipeline, according to an Associated Press report released on Thursday.

That’s money the sparsely populated northern state, which struggles with declining tax revenue, can use.

North Dakota has a police bill of $33 million from the cost of dispatching officers and security personnel to the pipeline site to respond to sometimes violent protests.

As soon as next week, Dallas-based Energy Transfer Partners’ $3.8 billion pipeline could begin shipping crude oil on the more-than 1,000-mile journey to Illinois.

While the revenue the state expects to gather in just one year will far exceed North Dakota's higher police expenses, experts say the extra revenue shouldn’t be considered a payoff.

“This is just one benefit a state gets if it is able to make these pipelines work,” Nick Loris, research fellow in energy and environment policy at the Heritage Foundation, told Fox News. “It’s a cherry on top economically, for something that gets Americans and businesses reliable, safe sources of energy — these are good things.”

But Fox News contributor and former Rep. Dennis Kucinich, D-Ohio, who opposes the pipeline, said the real cost may be higher than state officials know.

“North Dakota and other states may soon discover that the temporary financial benefits of pipeline revenue will be far outweighed by the almost incalculable environmental damage which these pipelines bring, including the potential contamination of drinking water supplies,” Kucinich told Fox News.