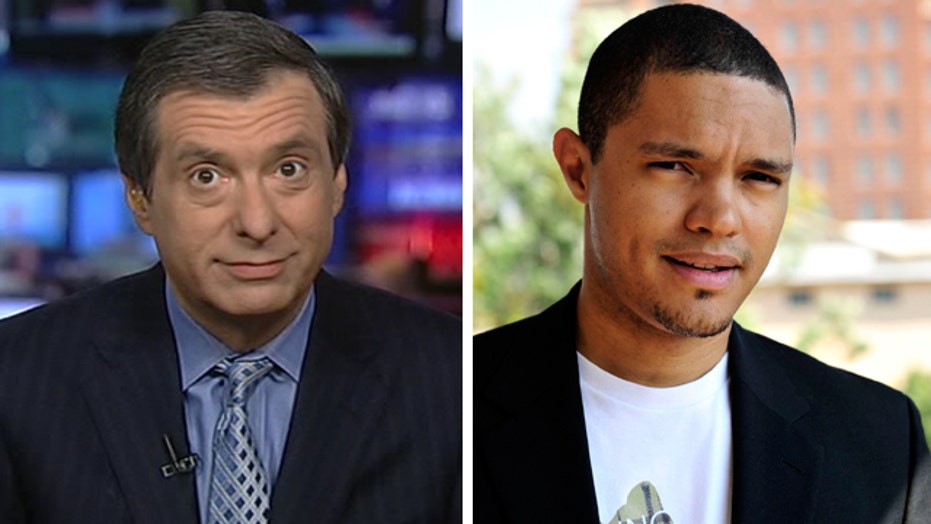 Kurtz: When comedy is offensive

Is the new host of the “Daily Show” mortally wounded even before he starts the gig?

The debate over Trevor Noah has now morphed from complaints about insensitive jokes from the past to a more fundamental argument about whether he is picking the wrong targets and is a lousy cultural fit for an American audience.

I didn’t jump into this one immediately because I wanted to think it through. Noah has made some offensive jokes aimed at Jews, at fat women, at Asians, and yes, at African-Americans. But I usually believe in giving comedians a wide berth. Sharp-edged humor often draws a little blood, as performers from Don Rickles to Richard Pryor to Sarah Silverman have known all too well.

But Noah, of course, won’t just be doing standup at some Johannesburg joint. Perhaps because the bigger names (John Oliver, Samantha Bee, Larry Wilmore) weren’t interested or available, he is taking over what’s become an important American cultural franchise.

Do I wish he hadn’t made a joke about almost running over a Jewish kid in a German car? Or about rich Jews? Or about the sexual reluctance of Jewish women? Or about “fat chicks”? Yep, yep and yep. This is not exactly standing up to power.

And then there are his shots at America. It’s one thing when Stewart mocks American values (or administrations, or politicians, or business leaders, or those of us in the media) because, ultimately, he’s seen as one of us. If Noah is viewed as an outsider slamming the US of A, the audience may not like it so well — just as, say, many Americans resented being lectured on gun control by Piers Morgan.

Noah has made only a brief defense on Twitter: “To reduce my views to a handful of jokes that didn’t land is not a true reflection of my character, nor my evolution as a comedian.”

And it’s true that any comic, especially one who’s just 31, is going to have an archive of questionable jokes. But all this raises two basic questions:

One, doesn’t Comedy Central have access to Twitter? The network, while standing by its man, seems surprised by the uproar.

Two, is Twitter so powerful that it can turn a previously obscure comic from hero to zero in the space of 24 hours? The answer is probably yes. (Obscure only here in the States, as Noah has 2 million followers.)

So while the criticism may be deafening, Noah is purporting to play in the big leagues.

Salon blames it on his employer:

“If Noah looks bad now, Comedy Central looks worse. How could it miss these tweets? Did it really think through the Noah hire? All signs point to the real possibility that it did not.

“As a number of top candidates for the host position pulled out and went on to other projects, one has to wonder if Comedy Central really considered the Noah hire with care. While the Twitter drama doesn’t make the network look good, there is another complication to Noah’s hire that few have considered: Noah is not from this country. And his outsider perspective radically shifts the context for his jokes — and the way they are likely to be received, especially by conservatives.

“The power of satire is driven by the need for the audience to feel like they are ‘in’ on the joke. Stephen Colbert referred to his viewers as ‘it-getters.’ In order for Noah to be able to productively satirize us, we need to feel like we are on his side and not the object of his derision. But it isn’t clear that he can create a sense of community that can make his cracks about the United States work the same way that Jon Stewart’s did.”

In the Washington Post, black writer Wendy Todd is outraged:

“Noah might look like an enlightened choice, but his routines show he isn’t — his jokes often hinge on insulting African-Americans.

“Back in 2012, Noah made his first American appearance, on ‘The Tonight Show with Jay Leno.’ The bulk of his routine was composed of jokes about black Americans. The United States, he said, was not ‘the America he was promised,’ and ‘America has the credit of a black man.’…

“Because he continues to separate himself from African Americans by his repeated use of ‘they’ when making fun of us, Noah should go walk around St. Louis or Cleveland. He’d find out quickly that he’s not viewed any differently than us… It’s all too acceptable to disrespect people of color in this country, especially African Americans, even when you’re also a person of color. Not only did Noah get away with these routines, now he’s being rewarded for them.”

And then there’s whether he flunks the laugh test, as Slate observes:

“These jokes are offensive because they are reflections of cultures that are oppressive and privileged — and rather than being critical of those societal constructions, the jokes instead reinforce them. The jokes imply that it is acceptable — funny, even — to belittle gay, heavy, or Jewish people…

“He's not a standup comedian anymore. He's about to step into a job that discusses high-profile political and social issues. Noah needs to be trusted to be able to do that in a way that is smart and fair and certainly not bigoted. As Jamie Weinstein wrote for the Daily Caller, ‘Many young people don't watch “The Daily Show” just to laugh — they watch the show to get their news. The show shapes perceptions.’

“If Trevor Noah wants to be the next Jon Stewart, he certainly can't do it like this.”

Bloomberg’s Will Leitch puts Noah in a political context:

“The similarities between Obama and Noah are undeniable, particularly in cultural upbringing. Like Obama, Noah was raised by mixed-race parents, his mother a black South African and his father is a white German of Swiss decent. (His parents briefly lived together—his mother was jailed for a short time for the relationship, which took place during apartheid…

“Now he has perhaps the most coveted job in American comedy. It’s too soon to tell how he’ll handle the trickier parts of the job, the non-comedy stuff you have to do, the sparring with Fox News, the interviewing of celebrities, being the public face of an American comedy institution. It may take a while to fully catch up on all the American comedy vocabulary it takes to host a nightly television comedy show. (He speaks six languages already, so it shouldn’t take that long.) It is a risky choice for Comedy Central, to pick someone who not only has little familiarity to American audiences but, in fact, has little actual performing experience in the United States.”

Given the stakes involved—for the network as well as Noah—both have handled this horribly, with terse, defensive statements. If he wants to salvage his reputation, Trevor Noah should go on a major television show and tackle these questions head-on—with a little humor, of course.