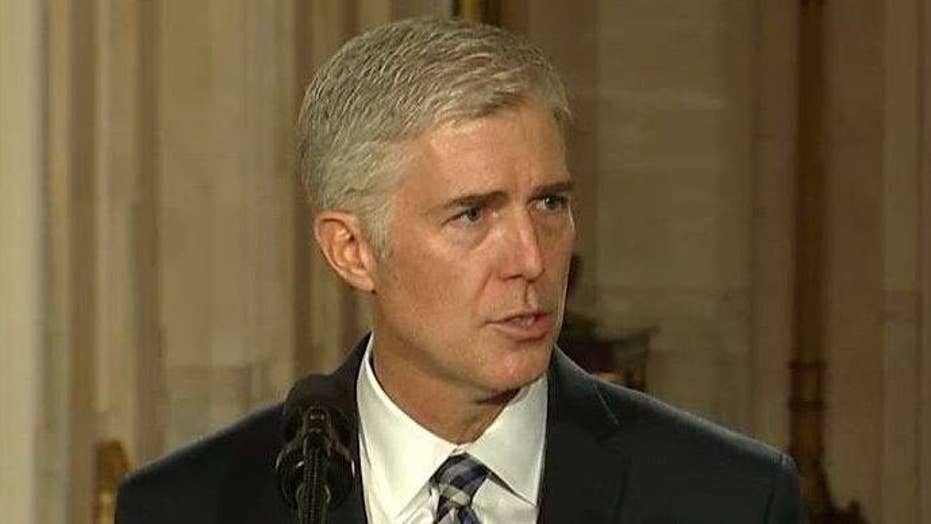 Neil Gorsuch: I am honored and I am humbled

Republican lawmakers and conservative groups hailed President Trump's nomination of federal appeals judge Neil Gorsuch to the Supreme Court Tuesday night, even as Democrats questioned whether the nominee has sufficient "respect for constitutional values of liberty, equality and justice for all."

"Like Justice Scalia, [Gorsuch] understands the constitutional limits on the authority of a federal judge and that the duty of a judge is to apply the law even-handedly, without fear or favor, and not to rule based on one’s empathy with a party in a case," McConnell said in a statement.

House Speaker Paul Ryan, R-Wis., said Trump had "fulfilled his [campaign] pledge to nominate a judge who has a demonstrated loyalty to the Constitution and a strong commitment to life." Ryan added that Gorsuch was a "phemonenal" choice by the president.

Sen. Ted Cruz, R-Texas, who unsuccessfully challenged Trump for the Republican nomination last year, echoed the speaker, saying that Trump had satisifed his promise, "and the rule of law will be all the better for it."

Sen. Ben Sasse, R-Neb., a frequent critic of Trump, tweeted his approval of the nomination, calling Gorsuch "a tremendous pick."

By contrast, and in an apparent preview of the bitter confirmation fight ahead, the Democratic National Committee said Gorsuch's nomination "raises some very serious questions about whether he would be a Supreme Court Justice who believes the Constitution protects all of us, not just the wealthy, and whether he can approach each case with an open mind to make fair decisions based on the merits."

The DNC statement questioned whether the nominee has the "utmost respect" for constitutional values.

Senate Minority Leader Chuck Schumer, D-N.Y., said he was "skeptical that [Gorsuch] can be a strong, independent Justice on the Court." Schumer added that Gorsuch had previously "sided with corporations over working people [and] demonstrated a hostility toward women’s rights."

Sen. Ron Wyden, D-Ore., went even further, saying Gorsuch's nomination was "a breathtaking retreat from the notion that Americans have a fundamental right to Constitutional liberties, and harkens back to the days when politicians restricted a people’s rights on a whim.

"No Senator who believes that individual rights are reserved to the people, and not the government, can support this nomination," Wyden added.

The nomination of Gorsuch was also praised by several conservative groups. Marjorie Dannenfelser, the head of the pro-life Susan B. Anthony List, described the judge as "distinguished jurist with a strong record of protecting life and religious liberty, as evidenced by his opinions in the Hobby Lobby and Little Sisters of the Poor cases."

Tea Party Patriots President Jenny Beth Martin added that Gorsuch "has a distinguished record that demonstrates he will be fair to all Americans, no matter their background or beliefs."