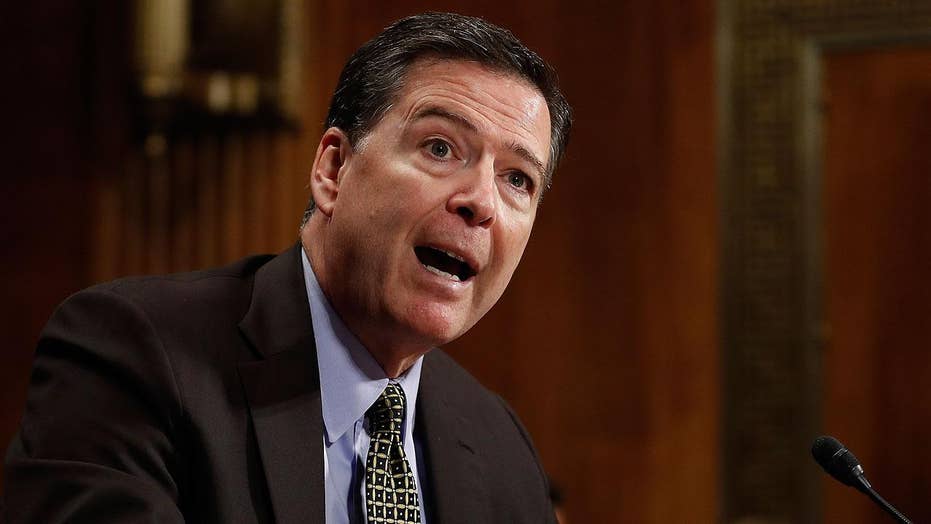 Former FBI Director James Comey’s blockbuster testimony before a Senate panel Thursday has the potential to both arm President Trump’s critics with new evidence he sought to thwart a federal investigation of his associates – and bolster his defenders’ claims that he did not cross a legal line.

The fired FBI boss is set to testify before the Senate Intelligence Committee starting at 10 a.m. ET. Ahead of the highly anticipated appearance, the Senate panel released his seven-page opening statement that at times read more like a steamy summer novel than congressional record.

At the same time,  a source close to Comey told Fox News he will not reach any legal conclusion about whether Trump engaged in “obstruction of justice.”

Comey’s written statement also makes clear that Comey repeatedly assured Trump he was not personally under investigation, just as Trump has claimed.

The president's personal lawyer Marc Kasowitz focused on that part of the statement and said Trump feels "completely and totally vindicated."

Even with Comey apparently stopping short of any “obstruction” charge, his opening statement alone gives plenty of ammo to Trump’s critics.

According to the remarks, Comey plans to say that Trump told him during a private White House dinner in January that, “I need loyalty. I expect loyalty.”

Comey said, in response, he “didn’t move, speak, or change my facial expression in any way during the awkward silence that followed. We simply looked at each other in silence.”

Comey also alleged that Trump sought help in lifting the Russia investigation “cloud” and pressured him regarding any investigation into former national security adviser Michael Flynn.

But there could be a silver lining for Trump supporters regarding the Flynn conversation.

Comey said that when he and Trump were alone, Trump told him Flynn is a “good guy” and, “I hope you can let this go.”

Comey said he later understood Trump to be referring only to Flynn and not the broader Russia investigation.

“I did not understand the President to be talking about the broader investigation into Russia or possible links to his campaign," Comey said.

If Comey stops short of alleging obstruction of justice, it could lend credibility to Trump’s case that the Russia controversy and allegations of a cover-up are overblown.

For Eric Beach, co-chair of the Great America Alliance, it would mean case closed.

“If there is no evidence, this will certainly allow Trump to move on,” Beach told Fox News. “If the leaks are true and Comey does not allege obstruction of justice, the rest is rhetoric.”

Scottie Nell Hughes, national spokesman for the Committee to Defend the President PAC, also told Fox News they are weary of Comey using testimony as “an opportunity to continue to engage in spreading unsourced rumors or as a chance for revenge at President Trump for his dismissal.”

Democrats are eager to probe for new details about Comey’s conversations with Trump and look at what the true motivation was for Comey’s firing last month.

On Wednesday, Sen. Ron Wyden, D-Ore., told Fox News he has “been spending a lot of time looking at the president’s own words.”

“For example, the president went on national television and said the reason he fired Comey was to make the Russia matter go away. That's an attack on American institutions,” he said.

While Wyden hasn’t been the only lawmaker demanding answers, he’s been among the loudest voices in Congress calling for the FBI to release additional details on what it knows about the timing of Comey’s firing, Trump and its ties to the Kremlin.

The Comey appearance will be a key opportunity, even with five separate investigations looking into the Trump campaign’s possible ties to Russia.

Comey is likely to be quizzed even more about private conversations he had with Trump and the notes he kept about those talks. He kept such a memo regarding the conversation where Trump allegedly pressured him on Flynn.

“It would be unthinkable,” Sen. Mark Warner, the top Democrat on the Senate Intelligence Committee said on CBS’s “Face the Nation.” "We've known since Watergate that rules of the road were, you know, a president shouldn't intervene in an ongoing investigation, particularly the case if it involves individuals that are close to that president.”

The FBI has refused to hand over Comey’s memos to Congress, citing an ongoing investigation. Comey’s testimony could shed light even more on what exactly was written in the documents.

Comey also is likely to be pressed on the FBI’s underlying investigation into whether the Trump campaign colluded with Russia as well as Moscow’s meddling in the U.S. elections.

Multiple U.S. intelligence agencies have concluded that Russian hackers had their thumb on the scale in Trump’s favor during the 2016 presidential campaign. What lawmakers will want to know is if anyone from the Trump campaign aided the effort.

Trump and his team all along have denied any collusion, and denied any efforts to pressure Comey on the case, which is now being overseen by Special Counsel Robert Mueller.

Lawmakers also could ask the ex-FBI boss why he decided to initially keep secret the conversation he allegedly had with the president regarding Flynn.

But could Comey’s testimony sway public opinion from right-leaning voters and independents who have strongly supported Trump in the past?

"The real question is which Comey shows up to testify: the talkative insider dying to dish the inside scoop on Trump's bizarre and increasingly unpredictable antics, or the tight-lipped G-man who keeps his own counsel and answers every second question with a no-comment,"  Ohlin told “Newsweek.” "If it's the former it will be an unparalleled D.C. summer blockbuster that will provoke an epic Trump tweet-storm meltdown.  But if it's the latter it will be an anticlimactic box office flop."

Judging from Comey’s fiery written statement, it’s likely to be the former.