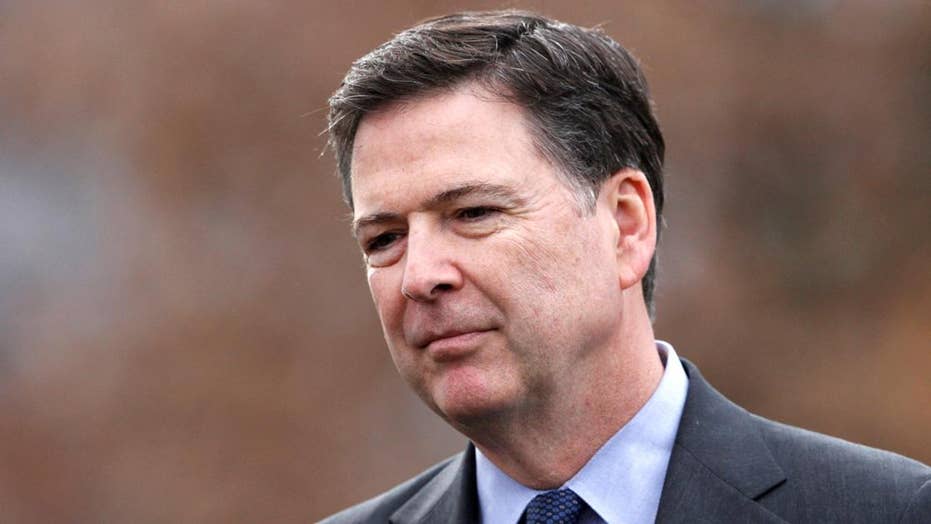 Newly released documents reveal that then-FBI Director James Comey’s draft statement on the Hillary Clinton email probe was edited in a way that watered down the agency's findings. #Tucker

Former FBI Director James Comey caused a stir on social media by calling for “more ethical leadership” in 2018, even as his time at the helm of the bureau has come under intense scrutiny over the last year.

Comey’s tweet had more than 30,000 retweets on Monday morning – and thousands of responses accusing him of lacking self-awareness amid the firestorm surrounding the bureau he once led.

“Here is hoping 2018 the U.S. will have a clean, politically, FBI…that will actually do their jobs,” one user, David Weissman, remarked.

Another replied: "Lordy, how could you type that with a straight face?"

(During a congressional hearing last year, Comey memorably said "Lordy, I hope there are tapes" after the president suggested it was possible he had recorded their conversations.)

The Department of Justice’s Inspector General is conducting a review of the bureau’s investigation -- under Comey’s watch -- into former Secretary of State’s Hillary Clinton email servers.

Over the last year, it was revealed Comey began drafting his July 2016 exoneration statement before key witnesses in the Clinton email investigation had been interviewed.

Trump’s attorneys have also pounced on Comey for admitting to orchestrating the leaking of his memos about his interactions with the president to the New York Times in the hopes it would lead to a special counsel investigation. (Associated Press)

The inspector general review also is looking into whether FBI Deputy Director Andrew McCabe – whose wife has strong ties to the Democratic Party – should not have been involved in the investigation.

Other top FBI officials, who worked under Comey and were involved in the Russia investigation, have also come under scrutiny for anti-Trump messages.

Lawmakers have been alarmed by recently revealed texts from FBI official Peter Strzok, who called Trump an “idiot” and who referenced an “insurance policy” against a Trump presidency.

Strzok had been assigned to Robert Mueller’s special counsel probe, but has since been reassigned.

Trump’s attorneys have also pounced on Comey for admitting to orchestrating the leaking of his memos about his interactions with the president to the New York Times in the hopes it would lead to a special counsel investigation.