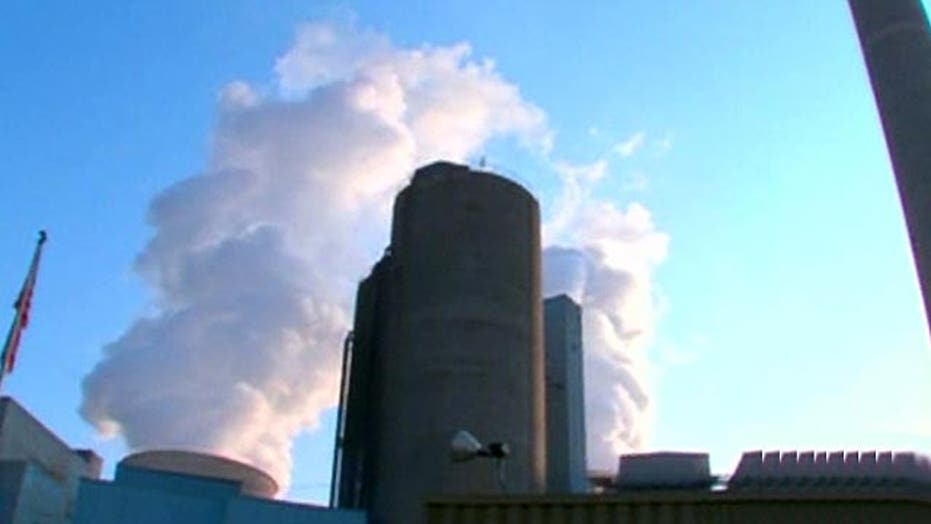 Coal-state lawmakers, accusing President Obama of using a back door to impose strict emissions limits on power plants, are rallying to slam that door shut -- claiming the plan would cost jobs and jack up electric bills.

In Kentucky, West Virginia, and other states that rely on coal to fuel their own economies -- and that help generate power for everybody else -- officials vowed Monday to introduce legislation halting the newly announced EPA plan.

Under the draft regulation unveiled Monday, carbon emissions at fossil fuel-burning power plants would be cut 30 percent by 2030.

Sen. Rand Paul, R-Ky., calling the move an "assault" on the economy and an "illegal use of executive power," said he'd "force a vote to repeal it."

On the House side, Democratic West Virginia Rep. Nick Rahall announced he would introduce legislation, along with Rep. David McKinley, R-W.Va., to stop the EPA plan.

"We will introduce bipartisan legislation that will prevent these disastrous new rules from wreaking havoc on our economy in West Virginia," Rahall said in a statement.

The 645-page plan, expected to be finalized next year, is a centerpiece of Obama's climate change agenda, and a step that the administration hopes will get other countries to act when negotiations on a new international treaty resume next year.

"We have a moral obligation to act," EPA Administrator Gina McCarthy said, in announcing the plan Monday morning.

While the proposed regulation drew praise from environmental groups, the coal industry and coal-state lawmakers were apprehensive.

Bill Bissett, president of the Kentucky Coal Association, said he's "certain that it will be very bad news for states like Kentucky who mine and use coal to create electricity."

Senate Republican Leader Mitch McConnell, who represents Kentucky, called it a "dagger in the heart of the American middle class" -- and predicted higher power costs and less reliable energy as a result. McConnell's general election opponent, Democrat Alison Lundergan Grimes, also spoke out against the plan.

The draft regulation sidesteps Congress, where Obama's Democratic allies have failed to pass a so-called "cap-and-trade" plan to limit such emissions.

Under the plan, carbon emissions would be reduced 30 percent by 2030, compared with 2005 levels. The proposal sets off a complex regulatory process in which the 50 states will each determine how to meet customized targets set by the EPA.

States could have until 2017 to submit a plan to cut power plant pollution, and 2018 if they join with other states to tackle the problem, according to the EPA's proposal.

EPA data shows that the nation's power plants have reduced carbon dioxide emissions by nearly 13 percent since 2005. But with coal-fired power plants already beleaguered by cheap natural gas prices and other environmental regulations, experts said reaching the targets won't be easy. The EPA is expected to offer a range of options to states to meet targets that will be based on where they get their electricity and how much carbon dioxide they emit in the process.

While some states will be allowed to emit more and others less, overall the reduction will be 30 percent nationwide.

The options include making power plants more efficient, reducing the frequency at which coal-fired power plants supply power to the grid, and investing in more renewable, low-carbon sources of energy. They also can set up pollution-trading markets as some states already have done to offer more flexibility in how plants cut emissions.

If a state refuses to create a plan, the EPA can make its own.

The Obama administration claimed the changes would produce jobs, cut electricity bills and save thousands of lives thanks to cleaner air.

But critics disputed the estimates. The U.S. Chamber of Commerce argues that the rule will kill jobs and close power plants across the country.

The group released a study that finds the rule will result in the loss of 224,000 jobs every year through 2030 and impose $50 billion in annual costs.

On Saturday, Obama tried to bolster public support for the new rule by arguing that carbon-dioxide emissions are a national health crisis -- beyond hurting the economy and causing global warming.