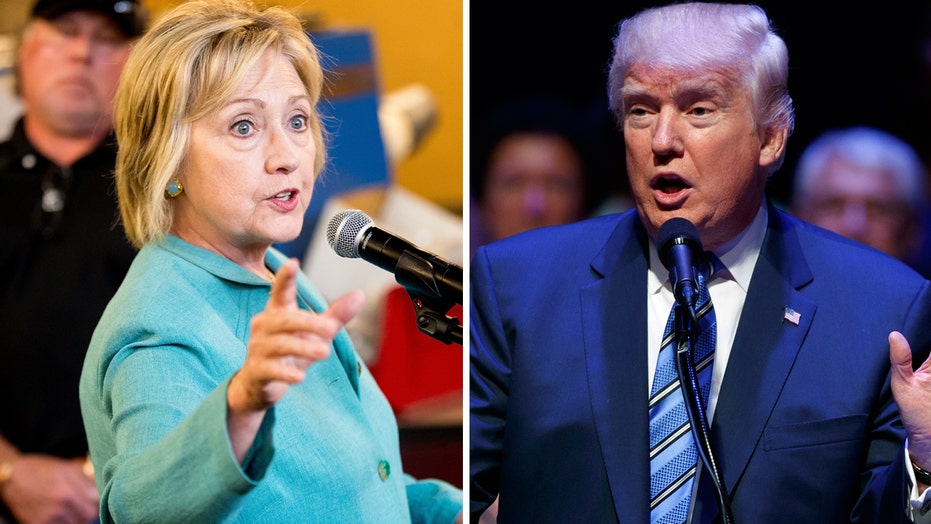 Clinton ramps up criticism of Trump

Hillary Clinton tried Friday to “clarify” her widely disputed claim that the FBI director had declared her statements on her email scandal “truthful” – but may have ended up adding to the confusion, delivering a lengthy and at-times conflicting explanation that the Donald Trump campaign later called “pretzel-like.”

She was asked early on about her statement, on “Fox News Sunday,” that FBI Director James Comey had affirmed her answers on her email controversy “were truthful and what I've said is consistent with what I have told the American people.”

Fact-checkers have roundly slammed that claim, noting that’s not exactly what Comey said.

Clinton, however, seemed to stand by her comments on Friday, saying she was referring to her answers in her FBI interview -- while also acknowledging she may have “short-circuited” her explanation.

In her clarification, though, Clinton gave a difficult-to-follow response.

“I have said … that what I told the FBI, which he said was truthful, is consistent with what I have said publicly,” Clinton said.

She added: “Having him say that my answers to the FBI were truthful – and that I should quickly add what I said was consistent with what I had said publicly, and that’s really in my view trying to tie both ends together.”

“Clinton knows the actions she has taken are disqualifying for someone wishing to become Commander-in-Chief, and that is why today’s painful, pretzel-like response to a simple question about her illegal server was obvious to everyone watching,” Jason Miller, Trump senior communications adviser, said in a statement.

Priebus accused Clinton of “yet again falsely claiming that what Director Comey said at his press conference is consistent with what she told the American people.”

Comey did say last month the bureau had “no basis to conclude she lied to the FBI.”

However, the FBI director did not say the same about her statements to the American public.

And during testimony before a House committee, Comey said it was “not true” that nothing Clinton sent or received was marked classified. To the contrary, he said, “there was classified material emailed.”

After Clinton’s initial statement to “Fox News Sunday” – which she repeated later in the week – fact-checkers piled on. The Washington Post awarded her “four Pinnochios.” PolitiFact gave her a “Pants on Fire” rating. FactCheck.org declared her claims “false.”

On Friday, however, Clinton challenged the claims on the classified markings. As her campaign has argued before, she noted Comey has acknowledged the markings themselves were not properly marked. The State Department also has suggested those markings shouldn’t have been there, which Clinton mentioned Friday.

She repeated: “I never sent or received anything that was marked classified.”

Comey, though, also challenged other statements by Clinton during his testimony last month. On her claim that she used one device, Comey said, “She used multiple devices.”

At the top of her answer, she said that using two emails accounts was a “mistake.”

But at the end, she said: “I will go back to where I started. I regret using one account.”