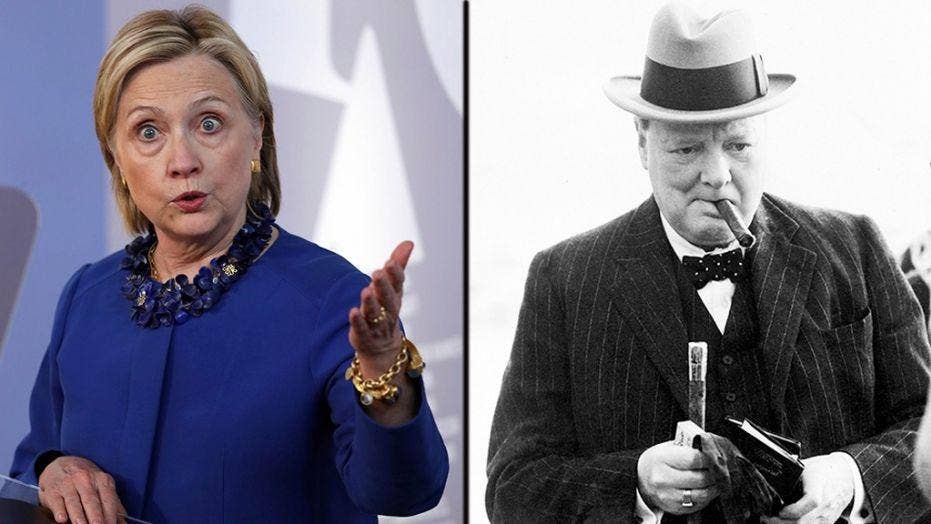 In an interview with a British news outlet, Hillary Clinton compared herself to Winston Churchill while responding to a question about being a polarizing figure.

Hillary Clinton, in an interview with a British newspaper this week, appeared to compare herself to wartime Prime Minister Winston Churchill while responding to a question about being a polarizing figure.

“I’m sure they said that about Churchill between the wars, didn’t they?” she told The Guardian when asked if she should withdraw from public life to help heal divisions in the U.S., given her reputation.

The 2016 Democratic presidential nominee then immediately claimed she wasn't actually comparing herself to Churchill, before going on to elaborate on the analogy.

Churchill went into the political wilderness between the two World Wars and during that time was a key voice criticizing then-Prime Minister Neville Chamberlain’s policy of appeasement toward Adolf Hitler. He would go on to become prime minister himself and help lead the Allies to victory in World War II.

The Guardian report notes that Clinton made the Churchill reference “a fraction too quickly for the line to sound spontaneous.”

Clinton continued: “I mean, I’m not comparing myself, but I’m just saying people said that, but he was right about Hitler, and a lot of people in England were wrong. And Churchill was a pain. He kept popping up all the time.”

Clinton indeed has remained a polarizing figure, with her popularity falling since the election, as she has stayed in the public eye with her book tour and media interviews.

She told the Guardian she is not going to “call it a day” anytime soon.

Clinton also used the Guardian interview to comment on the separation of families at the border in the wake of the Trump administration’s “zero tolerance policy” that ordered that all illegal border crossers be prosecuted. Trump has ordered the separations to be stopped, but critics are still fighting the prosecutions and other detentions.

Clinton said that she is worried that some of the minors may never be reunited, saying that that question is “keeping me up at night.”

“Absolutely I worry about that. I’m worried that some children will not be reunited,” she said.