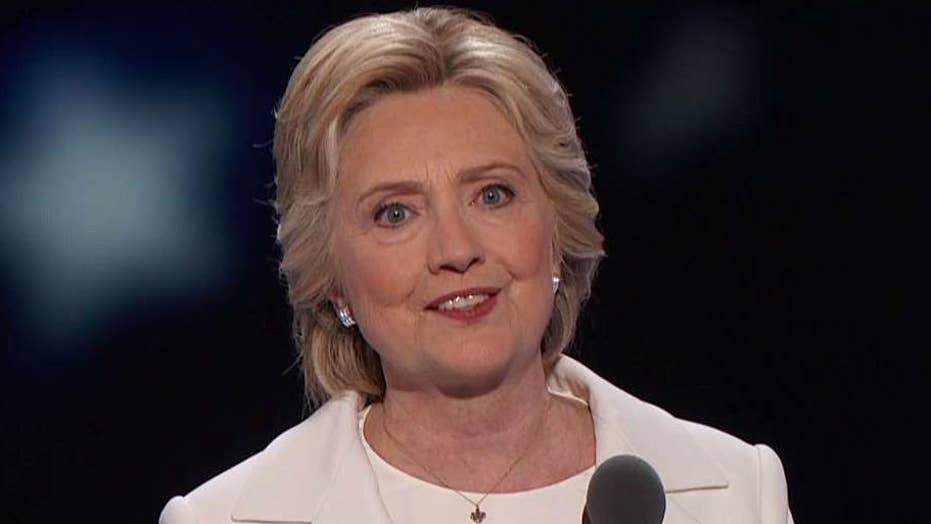 Hillary Clinton: Let's be stronger together

PHILADELPHIA – Hillary Clinton, declaring that the country faces a “moment of reckoning,” sealed her status in American history Thursday night as the first woman to top a major-party ticket, officially taking the torch from President Obama as the Democratic nominee for president.

The former first lady, senator and Secretary of State delivered a blistering attack against Republican nominee Donald Trump, challenging his fitness to occupy the Oval Office and setting the tone for what promises to be a bruising three-month campaign.

“The choice is clear,” Clinton told delegates in Philadelphia in a 56-minute, optimistic speech that stood in contrast to Trump's convention speech in which the mogul pounded away at headwinds facing the nation and drove home the urgent need for change.

"He's taken the Republican Party a long way, from 'Morning in America' to 'Midnight in America,'" Clinton said, following a warm introduction in which her daughter, Chelsea, painted a personal picture of Hillary the mother and grandmother. "He wants to divide us - from the rest of the world, and from each other.

“He’s betting that the perils of today’s world will blind us to its unlimited promise,” Clinton said. “He wants us to fear the future and fear each other. Well, a great Democratic President, Franklin Delano Roosevelt, came up with the perfect rebuke to Trump more than 80 years ago, during a much more perilous time: ‘The only thing we have to fear is fear itself.’”

The speech was interrupted many times by noisy protests from supporters of former rival Bernie Sanders, which were soon drowned out by Clinton loyalists chanting, “Hillary!”

Clinton, 68, sought to win over the Sanders backers, as well as disaffected Republicans and independents, vowing to fight for working people.

“I will be a president for Democrats, Republicans, independents, for the struggling, the striving, the successful … for all Americans together,” she said.

Clinton laid out a largely liberal agenda that at times echoed themes from Sanders’ campaign that have weaved their way into the party platform, on issues ranging from taxes to the minimum wage to immigration to health care.

Trump struck back before the night was over, releasing a statement that accused Democrats of creating a “fantasy world” at their convention and spreading a false message that “everything is wonderful.”

“At Hillary Clinton’s convention this week, Democrats have been speaking about a world that doesn’t exist," the statement read. "A world where America has full employment, where there’s no such thing as radical Islamic terrorism, where the border is totally secured, and where thousands of innocent Americans have not suffered from rising crime in cities like Baltimore and Chicago.”

Trump, who surged ahead of Clinton in most polls following his own party's convention last week, spoke at a rally in Cedar Rapids, Iowa, and panned the DNC convention before it wrapped up.

"I think we'll stay here all night because I don't really want to go home and watch that crap," he said.

The deeply personal attacks capped by last night's back-and-forth portend a potentially bitter run-up to the November election. Trump has taken to calling Clinton "Crooked Hillary," while Clinton and other Democrats have maligned Trump as a loose cannon who lacks the temperament to be president.

“He loses his cool at the slightest provocation,” Clinton said in her speech. “Imagine, if you dare, imagine … him in the Oval Office facing a real crisis. A man you can bait with a tweet is not a man we can trust with nuclear weapons.”

The Democrats’ closing convention night included a sharper security focus than earlier in the week. Retired Marine Gen. John Allen, who led troops in Afghanistan, vouched Thursday for Clinton as the candidate who can keep the country “safe and free.”

“America will defeat ISIS,” he vowed, naming the terror enemy that seemingly was glossed over by earlier convention speakers. As he spoke, competing chants of “USA” and “No More War” broke out in the audience.

The final night capped a dramatic week in Philadelphia that started with the abrupt resignation of party Chairwoman Debbie Wasserman Schultz amid yet another email scandal and ended with an all-hands-on-deck push for unity meant to ease unrest among Sanders supporters and others who spent the convention railing against the Democratic establishment.

Even on the final day, protesters organized events to encourage voters to de-register from the party. And as delegates streamed past the perimeter for the speeches, a contingent of anti-Clinton protesters shouted at the gates, “Hell no, DNC, we won’t vote for Hillary!”

"Time and again, Hillary Clinton’s dishonesty and cronyism have proved she is the wrong person to lead our country as president," Priebus said in a statement. "The American people have had enough of the corruption, the deceit, and the stonewalling which have been the hallmarks of her entire career."