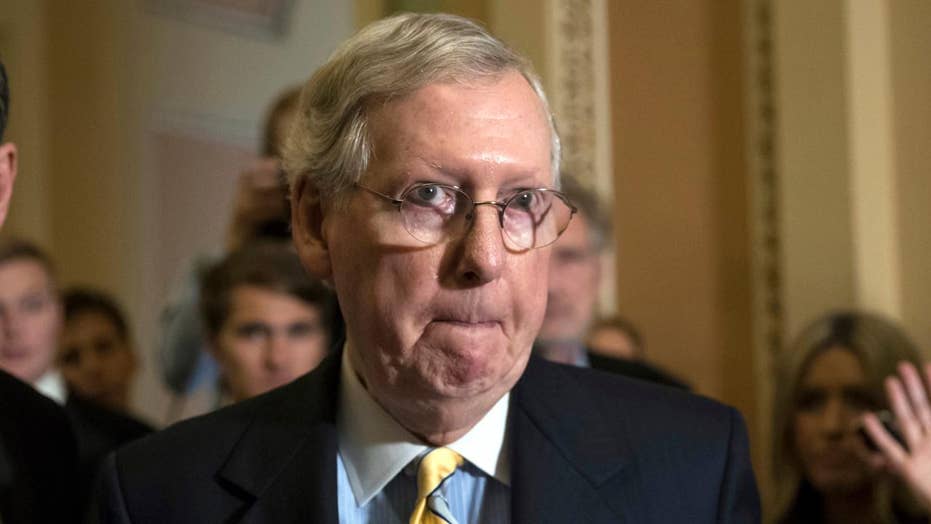 McConnell delays recess to get more work in on the agenda

August is the legislative equivalent of Amazon Prime Day.

Did you order a 55-inch Samsung TV from Amazon in February? Place an order for an Amazon Echo back in April? Put in for a Sony PlayStation 4 in May?

But you sure stocked up with the mother lode on Amazon Prime Day.

The House of Representatives is struggling to approve a budget. There’s no deal to raise the debt ceiling. The House and Senate have yet to pass any annual spending bills to fund the government. Republicans claim Democrats are blocking President Trump’s nominations. Health care appears stymied in the Senate. Still, Senate Majority Leader Mitch McConnell, R-Ky., intends to try to bring the retooled measure to the floor next week. McConnell may not even have 51 votes to proceed to the bill and launch the health care debate.

None of this was done in January, February, March, April, May, June and perhaps July.

But August. Well, that’s when things get done on Capitol Hill.

Both the House and Senate were scheduled to depart Washington for a five-week recess at the end of the month. But McConnell cut part of the annual “August recess,” holding senators in town for two weeks to potentially address health care, defense, some nominations and perhaps the debt ceiling.

“We don’t have enough time to address all of these issues,” said McConnell.

“If I were them, I wouldn't want to go home and face the voters either,” said Schumer.

Congress certainly needs time to address nettlesome problems. The question is what makes August so magical? Is there some meteorological phenomenon in Washington’s sultry, close, August air which thaws seemingly intractable issues, iced in the parliamentary permafrost since February?

Unclear. Some lawmakers wonder how much the Senate can really get done in August.

“Six, maybe seven nominations at best,” offered one skeptical Republican senator who asked not to be identified.

Certainly, Democrats could slow the process as they’ve done on many of President Trump’s nominations. Democrats could consume several days on each nomination if they throw up procedural roadblocks. Such a move forces the Senate to run out various “clocks” on those nominations. If you stretch it out over two weeks, it’s not hard to see how the Senate only confirms six or seven nominees over that timeframe.

But Republicans aren’t clamoring for the Senate to confirm the “Assistant Secretary Of Defense for Special Operations and Low-Intensity Conflict.” GOPers want to repeal and replace ObamaCare. A budget that slashes spending yet beefs up defense. Tax reform.

If the Senate does focus on nominations, it must potentially navigate a series of time-consuming machinations to go “in” and “out” of “executive session” to handle bills in “legislative session.”

This is why some lawmakers question whether the Senate will actually accomplish anything tangible during the August fortnight. Or worse, they wonder whether the entire operation is little more than a charade for political optics when the legislative agenda is in the ditch.

To be fair, the Constitution doesn’t compel the House of Representatives to exhaust hours at a time on nominations like it prescribes for the Senate. But the House Republican leadership didn’t immediately mimic McConnell and order its members to stick around in August either. House Majority Leader Kevin McCarthy, R-Calif., told rank-and-file Republicans he reserves the right to recall members “with 72 hours notice” during August.

A senior House Republican leadership source told Fox News the House wouldn’t “wait around” for the Senate to finish agenda items unless House action was required.

“We'll do what we have to do to get it done,” said Ryan, adding that the House was “far ahead of the pace” and was “hitting our mark” when it comes to legislative mileposts.

But the fear is this: the House may not have the legislative traffic to stick around. Tax reform is far from ready. There’s no plan to grapple with the debt limit. Plus, there’s a reluctance to start debating the 12 annual appropriations bills unless the House first adopts a broad spending blueprint for the year: a budget. So far, there’s no budget agreement.

“Listening sessions are still under way for the budget,” said Ryan. “(Budget Committee Chairwoman) Diane Black, R-Tenn., is getting the budget whipped into shape.”

Listening sessions. In mid-July for the budget that the House was supposed to adopt in April.

Could the House charge ahead with spending bills if there was budget first in place?

“Who said we aren’t going to pass a budget?” scoffed McCarthy.

It may happen yet. But the House still isn’t there. This is why some Republicans fret about keeping the House in session August. The only thing worse than getting waylaid by angry constituents is for Republicans to be mired in Washington with little to show for their efforts.

But that hasn’t stopped some House Republicans to force the issue.

“I’m telling you, we are going to be in session in August,” predicted Rep. Mark Meadows, R-N.C., leader of the conservative House Freedom Caucus.

Meadows isn’t just wanting the House to hang around for things to “look good.” He wants health care completed, a deal on the debt limit and “legislative text for tax reform.”

Congress must raise the debt ceiling this fall and determine how to fund the government by September 30, the end of the federal fiscal year.

“The debt ceiling is coming. We know it’s coming. There’s absolutely no reason to push ourselves into a corner like a bunch of rats,” said Rep. Scott Perry, R-Pa.

Of course, pushing everyone “into a corner like a bunch of rats” could be the tactic which prompts results. It’s been suggested that GOP leaders want to delay things so it’s easier to pass something like a government spending plan or hike the debt ceiling with a big deadline looming. Lawmakers are more likely to accept an unappetizing legislative solution under pressure. Otherwise, there’s no incentive to vote yes on an imperfect fix … in August or at any other time.