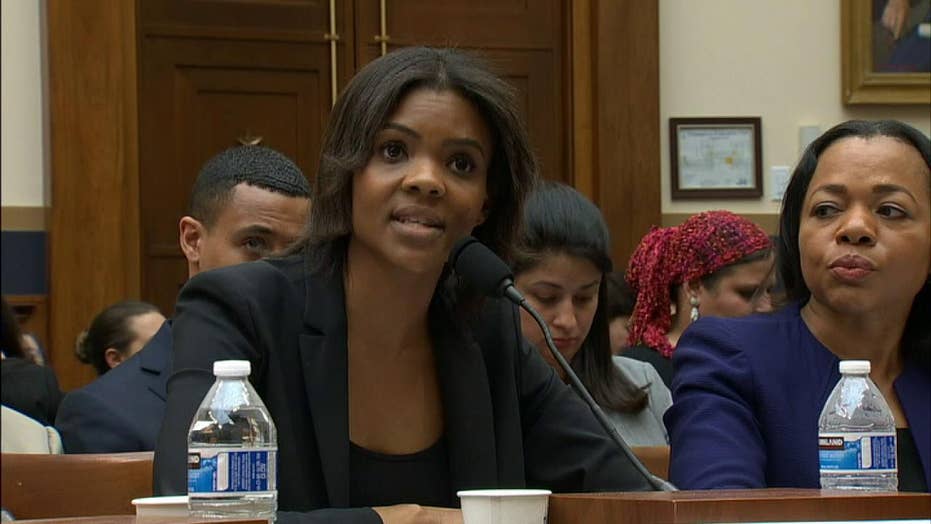 Tensions at a heated House Judiciary Committee hearing on online hate speech boiled over on Tuesday, when conservative commentator Candace Owens accused Rep. Ted Lieu, D-Calif., of distorting her comments on Hitler so flagrantly for the sake of a smear that he must "believe black people are stupid."

“In congressional hearings, the minority party gets to select its own witnesses," Lieu began. "Of all the people the Republicans could’ve selected, they picked Candace Owens. I don’t know Miss Owens; I’m not going to characterize her; I’m going to let her own words talk.”

Lieu then produced a cellphone and played a short clip of Owens' previous remarks at a conference in December, which were widely circulated in February: “I actually don't have any problem with the word 'nationalism.' I think the defintion gets poisoned by elites that want globalism. Globalism is what I don't want.  When we say ‘nationalism,’ the first thing people think about — at least in America — is Hitler. You know, he was a national socialist, but if Hitler just wanted to make Germany great and have things run well, OK then, fine. The problem is, he had dreams outside of Germany. He wanted to globalize. He wanted everyone to be German. ..."

Owens' remarks echoed those of President Trump, who has repeatedly defended nationalism against progressive attacks that the concept is intrinsically racist.

But Owens soon made clear she felt Lieu had intentionally misrepresented her views to drive a false narrative not just against Owens, but also Trump and Republicans in general.

“I think it’s pretty apparent that Mr. Lieu believes that black people are stupid and will not pursue the full clip in its entirety,” Owens said.

Judiciary Committee Chairman Jerry Nadler, D-NY., interrupted, telling Owens, “It is not proper to refer disparagingly to a member of the committee. The witness will not do that again.”

After clarifying that she had not, in fact, called Lieu stupid, Owens continued: "As I said, he is assuming that black people will not go and pursue the full two-hour clip. He purposefully cut off -- and you didn't hear the question that was asked of me. He's trying to present as if I was launching a defense of Hitler in Germany, when in fact the question that was presented to me was pertaining to wheher I believed in nationalism, and that nationalism was bad."

As Owens went on, Lieu tapped his hands together silently.

"And what I responded is that I do not believe we should be characterizing Hitler as a nationalist," Owens said. "He was a homicidal, psychopathic maniac that killed his own people. A nationalist would not kill their own people. ... That was unbelievably dishonest, and he did not allow me to respond to it."

Owens concluded: "By the way, I would like to also add that I work for Prager University, which is run by an orthodox Jew. Not a single Democrat showed up to the embassy opening in Jerusalem. I sat on a plane for 18 hours to make sure I was there. I am deeply offended by the insinuation of revealing that clip without the question that was asked of me."

Turning to her 75-year old grandfather seated behind her, Owens remarked, “My grandfather grew up on a sharecropping farm in the segregated South. He grew up in an America where words like ‘racism’ and ‘white nationalism’ held real meaning.”

The hearing was separately derailed when a YouTube livestream of the proceedings was bombarded with racist and anti-Semitic comments from internet users.

YouTube disabled the live chat section of the streaming video about 30 minutes into the hearing because of what it called "hateful comments."

FILE - In this Dec. 17, 2018, file photo, a man using a mobile phone walks past Google offices in New York. Executives from Google and Facebook are facing Congress Tuesday, April 8, 2019, to answer questions about their role in the hate crimes and the rise of white nationalism in the U.S. (AP Photo/Mark Lennihan, File)

The incident came as executives from Google and Facebook answered lawmakers' questions about the companies' role in the spread of hate crimes and the purported rise of white nationalism in the U.S. They were joined by leaders of such human rights organizations as the Anti-Defamation League and the Equal Justice Society, along with conservative commentator Candace Owens.

"There is no place for terrorism or hate on Facebook," Potts testified. "We remove any content that incites violence."

The hearing broke down into partisan disagreement among the lawmakers and among some of the witnesses, with Republican members of Congress denouncing as hate speech Democratic Rep. Ilhan Omar's criticism of American supporters of Israel.

As the bickering went on, Nadler was handed a news report that included the hateful comments about the hearing on YouTube. He read them aloud, along with the users' screen names, as the room quieted.

"This just illustrates part of the problem we're dealing with," Nadler said.

Monday's hearing was prompted by the mosque shootings last month in Christchurch, New Zealand, that left 50 people dead. The gunman livestreamed the attacks on Facebook and published a long post online that espoused white supremacist views.

Owens was named in the mosque shooter's manifesto, along with eco-fascism, socialism, Trump, and other seemingly unrelated actors. The shooter, who professed affection for divisive online memes and sowing social discord, explicitly stated that his intent was to gin up division and goad different factions into attacking one another.