‘Jungle primary’ and California: What to know

What are ‘jungle primaries’ and why could this election process shut democrats out of a few competitive races?

NEWPORT BEACH, Calif. – The Democratic Party’s ambitious midterm plan to regain control of the House of Representatives faces its biggest test yet in Tuesday’s California primaries – where candidates are tripping over each other for the chance to flip Republican-held districts.

The big question facing the party, however, is whether their candidates’ enthusiasm could backfire. So many Democratic contenders have jumped into key races – largely running on an anti-Trump platform – that the overload threatens to split the vote and boost Republicans.

But the state nevertheless offers Democrats a wealth of opportunities to swipe seats. California's House races, meanwhile, are just a fraction of the action taking place on Tuesday, the biggest primary day so far this cycle. With eight states voting, an array of contests will reveal how each party is trending as the midterms near:

California’s “jungle primary” is set up to advance the top-two finishers to the general election regardless of party. Lt. Gov. Gavin Newsom, a liberal Democrat, is the clear front-runner in the gubernatorial race, according to recent polls. But the fight for the second spot on the ballot is being fought among a handful of hopefuls – notably former Democratic Los Angeles Mayor Antonio Villaraigosa and Republican businessman John Cox, who appears to be surging after an endorsement from President Trump.

Longtime incumbent Sen. Dianne Feinstein, D-Calif., remains the front-runner in the state’s Senate race despite her failure to secure the California Democratic Party’s endorsement in February. The fight for the second spot on the ballot is between the more liberal Democratic state Sen. Kevin de Leon and Republican James P. Bradley, among others. 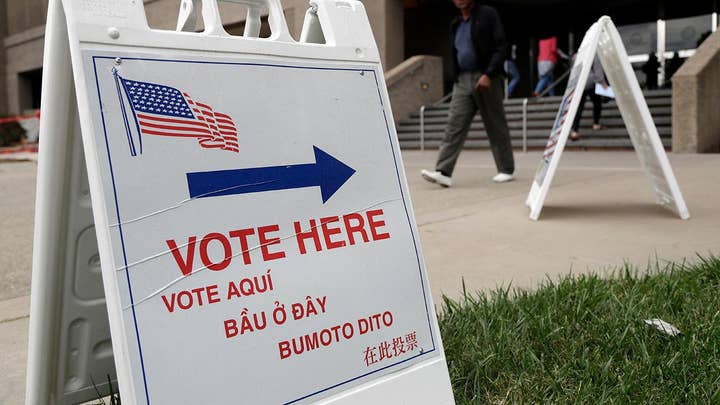 But the most consequential races Tuesday are the House battles playing out in California, with control of Congress at stake.

Democrats need to flip 23 GOP-held seats to wrest the House majority from Republicans this fall, and the party is targeting 10 districts in the Golden State alone.

That’s why Tuesday is so important.

Among the targeted Republican seats is one held by Republican Rep. Mimi Walters.

No Democrat has ever represented Walters’ 45th District in Orange County, but four Democratic candidates are competing for a chance to challenge her in November.

“This is really her only chance to flip the House,” Walters said. “So she’s taking on members like myself who typically she wouldn’t in the past.”

Kia Hamadanchy, one of the hopefuls trying to capitalize on what he calls the “Obama coalition” of young voters and immigrants, argued that a “progressive message” is the path to victory.

Hamadanchy joins Democrats Katie Porter, Dave Min and Brian Forde on the ballot Tuesday, and hopes that highlighting Walters’ vote in favor of the GOP-engineered tax reform bill will resonate.

'It doesn’t look like there’s a blue wave. It’s turning into a bit of a blue trickle.'

“One thing they tell you as a Republican in Orange County is never raise taxes, and one of the things she’s done is voted to raise taxes on all her constituents,” Hamadanchy said.

Walters disputes any liability from her vote to reform the tax code. Republicans argue that the legislation largely resulted in tax cuts.

“I think people in my district are very happy with the tax reform package,” Walters said.

Republican lawmakers in Orange County, meanwhile, are hoping that Democrats crowd themselves out in some of Tuesday’s races. 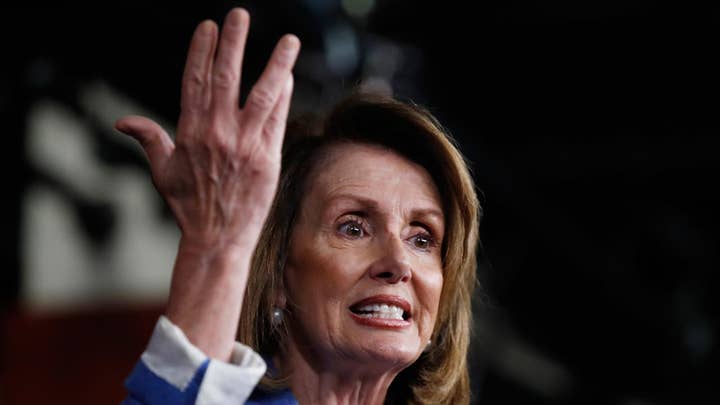 In the 48th district, for instance, which includes Newport Beach and Laguna Beach, Democrats face a potential scenario where two Republicans – and no Democrats – advance to November.

The seat is currently represented by GOP Rep. Dana Rohrabacher, who’s faced criticism over Russia-friendly rhetoric. But if Democrats split the vote too many ways on Tuesday, Republicans could grab the first and second ballot spots under the “jungle primary” system.

“We’ve got eight people on the ballot,” said Harley Rouda, a Democratic candidate hoping to challenge the longtime GOP incumbent. “The issue is the jungle primary in California, and what sounded like a great idea, just the top-two vote getters move forward, has turned into all sorts of gamesmanship.”

Rouda has the support of the Democratic Congressional Campaign Committee, which is working to warn voters about the possibility that they might not have any Democratic options in November.

“While the top-two problem certainly presents challenges for Democrats, it’s really important that folks get out and vote over the next couple of days,” said Andrew Godinich, west regional press secretary for the DCCC.

Scott Baugh, a former state lawmaker, is the Republican hoping to snag that second slot and challenge Rohrabacher in November.

“If I come in second … the Republicans don’t have to spend any money to defend the seat, it’s already a Republican seat,” he noted.

Baugh, who argues that Rohrabacher hasn’t been productive enough during several decades in Congress, believes that if Tuesday’s primary leaves Democrats without a candidate on the ballot, their national strategy will suffer.

“It doesn’t look like there’s a blue wave,” Baugh said. “It’s turning into a bit of a blue trickle or a blue drought or something.”

But over in California’s 49th district, Democrats see another opportunity in the seat soon to be vacated by retiring GOP Rep. Darrell Issa.

“Every week for 67 weeks, rain or shine after Trump’s inauguration, there were protesters that arrived outside Darrell Issa’s office, hundreds at a time,” said Democratic candidate Mike Levin. “And they represented every demographic, every age, all backgrounds in our community.” 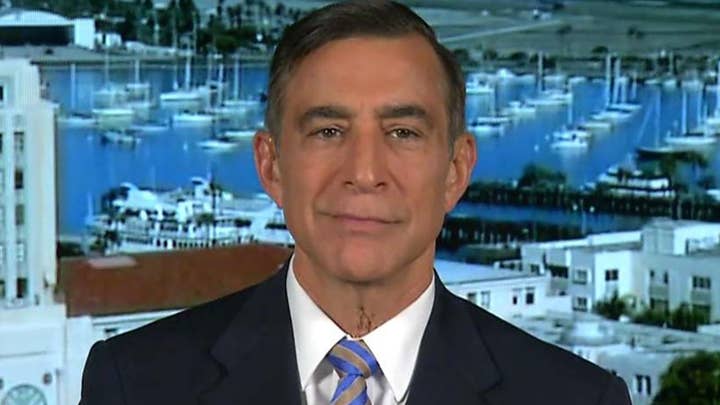 Levin is banking on support from constituents frustrated by a lack of attention to environmental issues.

“Our district has 52 miles of coastline from north to south, we care very deeply about clean air and clean water, clean beach, getting the nuclear waste off our coast. Darrell Issa has been our member of Congress for 17 years, he hasn’t solved the problem,” Levin said.

One leading Republican is countering arguments like that with a platform that closely mirrors the Trump agenda.

“Taxes are huge,” said candidate Diane Harkey, hoping to help the party hold the Issa seat. “So is the sanctuary state, the catch-and-release programs -- I mean everything that’s happened out of Sacramento is hitting this state really hard, and unfortunately all the Democrats are offering is ‘resist.’”