WASHINGTON -- National Security Adviser John Bolton said Tuesday that an increase in defense spending from NATO allies, after pressure from President Trump, marked a significant victory for the United States and made the alliance stronger.

"The statistics that the NATO secretary general has given us indicate that the Trump push, and that's what it is, to get NATO members to spend more has resulted in, based on his calculation, over the past two years in $100 billion more being spent by our European allies on defense," he said. "This is an unequaled triumph and I would argue it makes NATO stronger and that's exactly what we should be doing."

Arguing that an “America First” policy can lead to stronger results abroad, he pointed to Trump’s repeated public calls for NATO members to meet their commitment to spend at least 2 percent of their GDP on defense. The U.S spends approximately 3.5 percent.

NATO Secretary General Jens Stoltenberg said in an address to Congress in April that Trump’s message was having an impact. 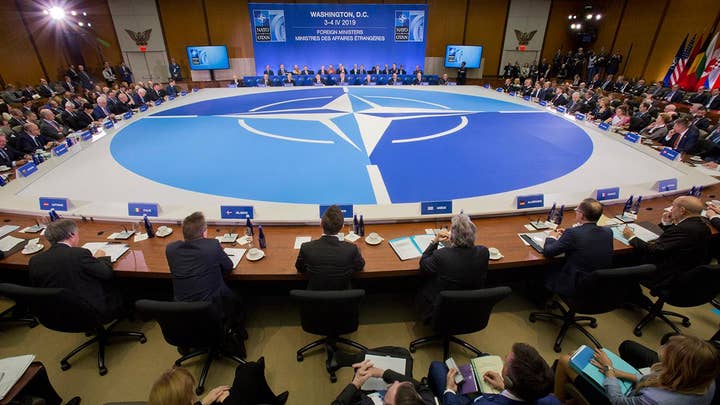 Stoltenberg said in April that European allies and Canada have spent an additional $41 billion in the last two years and that by the end of 2020, that figure will rise to $100 billion. It was that figure Bolton touted on Tuesday.

“That money will allow us to invest in new capabilities our armed forces need, including advanced fighter aircraft, attack helicopters, missile defense and surveillance drones,” Stoltenberg said in his address to Congress. “This is good for Europe and it is good for America.”

Bolton’s remarks appeared to try and thread the needle between a nationalist "America First" outlook and the kind of muscular foreign policy for which he has long advocated.

"There are threats in the proliferation world that require a very tough attitude, not just for the sake of toughness, but for the safety of the United States of America,” he said.

He went on to tell the gathering that while he approves of “effective alliance structures,” he is more skeptical of supranational governmental bodies that he views as antithetical to democracy and American interests.

"When someone says 'The policy of the U.N. taken in votes in the Human Rights Council and other U.N. bodies’ on issues like the death penalty -- I couldn’t care less what the policy of the United Nations is,” he said to applause.

The gathering was hosted by the Edmund Burke Foundation to discuss the return of nationalism in the West. Speakers included tech entrepreneur Peter Thiel, Fox News host Tucker Carlson and Yoram Hazony -- author of the influential 2018 book “The Virtue of Nationalism.” Sen. Josh Hawley, R-Mo., was scheduled to speak later Tuesday.

Not all aspects of the conference necessarily aligned with Bolton’s worldview. While speakers shared his skepticism of the U.N. and other liberal bodies, many also railed against the sort of foreign policy intervention in the 90’s and post-9/11 era that Bolton often supported.

Hazony, in his speech to the conference Monday, said that "utopian thinking swept the political right" in the 1990s and "it ruined everything it touched."

"A generation later much of the Middle East has been set to torch by America’s own hand yet with nothing to show for it but humiliation," he said.

But Bolton, referring to questions about whether he was a realist, an interventionist, or some other label, rejected many of the tags often assigned to him.

"When pressed, 'What is your foreign policy and view of the internationalist system?' -- my view is very simple: 'Pro-American.'"