President-elect Joe Biden said that “the integrity” of the nation’s elections remains intact in an address he gave Monday evening, immediately after electors in all 50 states and the District of Columbia cast ballots, formalizing Biden’s victory over President Trump in last month’s presidential showdown.

“In this battle for the soul of America, democracy prevailed,” the president-elect declared, in a speech carried live by all of the leading television broadcast networks and the three major national cable TV news networks. “We the People voted. Faith in our institutions held. The integrity of our elections remains intact.”

AFTER THE ELECTORAL COLLEGE VOTE, WHAT HAPPENS NEXT?

In his most forceful language to date, Biden described the president's persistent efforts to reverse the election results as an "unprecedented assault on our democracy."

But he also urged that “now it is time to turn the page. To unite. To heal.”

The former vice president spoke after the casting of ballots by Electoral College members across the nation. According to the results of last month’s election which were reconfirmed on Monday, Biden topped the president by an electoral count margin of 306-232.

Biden highlighted that amid the coronavirus pandemic, "we saw something very few predicted, even thought possible – the biggest voter turnout in the history of the United States of America."

And speaking from his hometown of Wilmington, Delaware, he emphasized that the election "now ranks as the clearest demonstration of the true will of the American people, one of the most amazing demonstrations of civic duty we’ve ever seen in our county. It should be celebrated, not attacked." 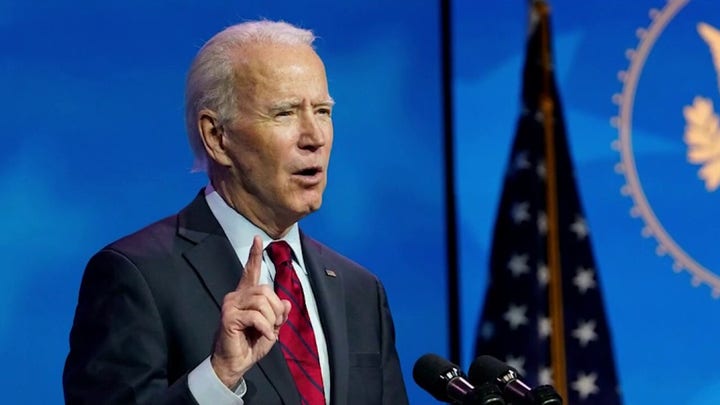 The Electoral College meetings, a formal step in presidential elections, came after weeks of failed legal challenges by the president's campaign and his allies, which culminated in the Supreme Court on Friday turning down a lawsuit from the Texas attorney general that aimed to throw out the popular vote results in Pennsylvania, Wisconsin, Georgia and Michigan, four key battleground states narrowly carried by Biden.

The president has refused to concede to Biden and continues to charge that there was massive voter fraud in the presidential election. On Monday, he again called the election “rigged.”

A day earlier, Trump once again charged on Twitter, without providing definitive evidence, that the presidential contest was the “MOST CORRUPT ELECTION IN U.S. HISTORY!”

Twitter, as it has repeatedly with tweets by the president claiming voter fraud, added a disclaimer saying that “This claim about election fraud is disputed.”

Trump has also repeatedly spotlighted the 74 million Americans who voted for him, without mentioning Biden's popular vote total.

The president-election, pushing back, noted the record 81 million votes that he and Vice President-elect Harris won. He said that the tally is "more than any ticket has received in the history of America. It represents a winning margin of more than 7 million votes over the number of votes cast for my opponent."

Biden also mentioned his 306-232 Electoral College victory over the president, which is the same margin that Trump defeated Democratic nominee Hillary Clinton in the 2016 election.

"At the time President Trump called his Electoral College tally a landslide," Biden noted. "By his own standards, these number represented a clear victory then and I respectfully suggest they do so now."

"In every case, no cause or evidence was found to reverse or question or dispute the results," he added. "A few states went for recounts. All the counts were confirmed."

Biden also spotlighted a lawsuit initiated by the attorney general of Texas - that was signed onto by 17 other states and more than 100 Republican members of the House.

The president-elect emphasized that "this legal maneuver was an effort by elected officials and one group of states to try to get the Supreme Court to wipe out the votes of more than 20 million Americans in other states and hand the presidency to a candidate who lost the Electoral College, lost the popular vote, and the lost each and every one of the states who’s votes they were trying to reverse."

"It’s a position so extreme I’ve never seen it before," Biden added. "Thankfully a unanimous Supreme Court immediately and completely rejected this effort."

Biden also said in his speech that “the flame of democracy was lit in this nation a long time ago. And we now know that nothing — not even a pandemic —or an abuse of power — can extinguish that flame.”

And he repeated his pledge from his White House campaign that “I will be a president for all Americans. I will work just as hard for those of you who didn’t vote for me, as I will for those who did.”

Looking ahead to the herculean tasks he’ll face when he’s inaugurated on Jan. 20, Biden emphasized that “there is urgent work in front of all of us. Getting the pandemic under control to getting the nation vaccinated against this virus. Delivering immediate economic help so badly needed  by so many Americans who are hurting today —  and then building our economy back better than ever.”

And he acknowledged what he called "the grim milestone" as the nation's death toll from the coronavirus pandemic topped 300,000.

"I know task before us won’t be easy. It’s tempered by the pain so many of us are feeling," he said.